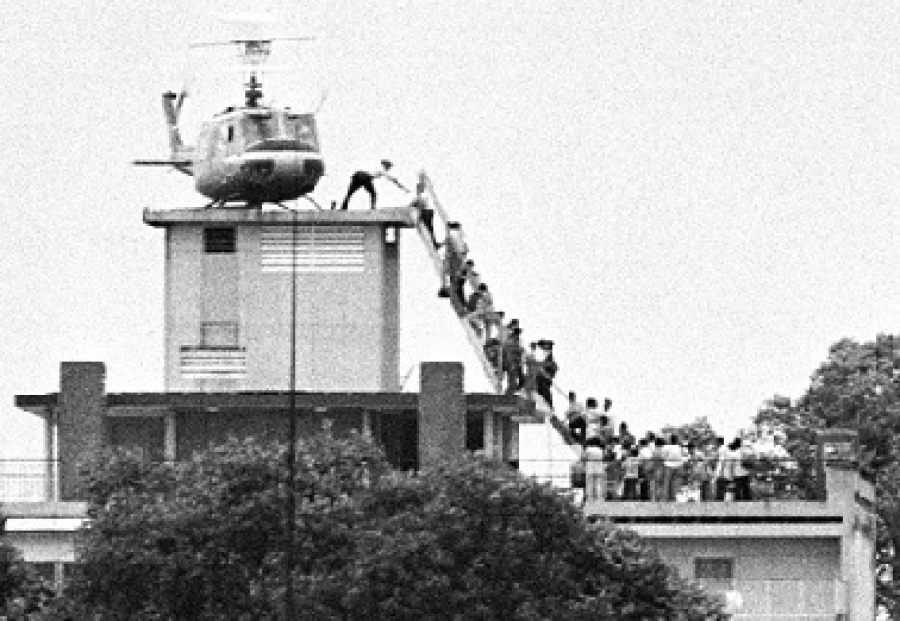 What a great way to start the day. Watching bitter Kurdish civilians throw rocks at departing U.S. troops fleeing Syria. It brings me back to some of the darkest, most formative moments in my life.

Two events in the 70s, when I was still a tween, marked me profoundly. Each was a national trauma, for those with a conscience. And each carved a scar in my heart that’s still with me today: Roe v. Wade and the fall of Saigon.

When the abortion decision played on the news, my mom fell silent. She looked kind of stunned. When I asked, she explained things starkly. It’s a talk I’ll never forget. In her smoke-tinged Hell’s Kitchen accent she said:

“You know how a woman carries her baby in her belly?”

“Well, now if she doesn’t want the baby, a doctor can go in and kill it.”

I couldn’t wrap my head around it. And I still can’t. Within two years, I insisted (over mom’s nervous worries) on collecting signatures door to door for the New York State Right to Life Party. I was a registered member of that party until it went defunct. My first trip to Washington, D.C.? The March for Life. My first op-ed submitted The Yale Daily News? On the right to life. It became my defining issue, and will be while I still draw breath.

Surrender and Slaughter in Saigon

The other searing memory that shaped me? Watching our helicopters pull away from the U.S. Embassy in Saigon. The desperate pleas, hysterical sobbing, then solemn, sullen despair of our allies and friends abandoned. The columns of Communist troops marching into the city.

Our soldiers had beaten the home-grown rebels, the Viet Cong. We’d signed a treaty and left. Then the Communist regime of North Vietnam tore up the treaty and launched a straight up invasion, like Hitler invading Poland. But the Democrats in Congress, feeling puffed up after Watergate, wouldn’t send Saigon aid. They seemed perversely pleased that every drop of American blood spilled there would now be wasted. It proved their antiwar hysteria correct in retrospect. It gave pro-Communist agitators like Jane Fonda the victory they’d hoped for.

In subsequent months, I was glued to the tube, watching news of the Christians and pro-Americans marched into re-education camps. Of the hundreds of thousands of Boat People, willing to sail creaky rafts across the Pacific, to get away from the Communists. California Governor Jerry Brown refused to admit them, afraid they might vote Republican.

And then, of course, the fanatical Marxist Khmer Rouge conquered Cambodia. Its pro-American government the Democrats had also thrown to the wolves. The regime, led by young fanatics in black pajamas, emptied the cities. They marched everyone with eyeglasses out to the rice paddies. They worked them to death, shot them, or sliced them apart with machetes, until almost a third of the nation’s population was gone. The worst auto-genocide in history, just in time for America’s Bicentennial.

Trump Can Prevent a Genocide with a Phone Call

So pardon me if I don’t want the same thing to happen today. I don’t want to watch a president I supported permit a similar genocide among our erstwhile allies, at the hands of al Qaeda or its Turkish sponsors.

And it’s not too late to stop this. We don’t need to put our troops back on the Syrian Turkish border. To be frank, the Turks won’t permit it. That’s right, we’re taking orders from the Islamist regime in Ankara.

But the story isn’t over.

Our allies against ISIS, the Syrian Democratic Forces have made a smart deal with the legal Syrian government in Damascus. They’ve agreed to unite the territory they captured from ISIS to that controlled by Damascus, while retaining some crucial autonomy. In return, the Syrian government and the Russians are protecting some of their people from the Turkish plan for ethnic cleansing.

Will we trade Christian civilians’ blood for oil?

But the most crucial population center for Syrian Christians and other minorities still stands endangered. The canton of Jazire sits in Turkish cross-hairs. Ankara wants to drive out its population and replace the Kurds, Christians, and Yezidis with refugees loyal to Turkey, controlled by al Qaeda. (That’s the real identity of the “Free Syrian Army.”)

Our Troops an Hour Away from the Future Killing Fields

And hundreds of U.S. troops sit just down the road just an hour away. In Trump’s words, they’re “securing the oil.” It wouldn’t take much, or require any fighting by U.S. soldiers, to move some troops to Jazire. Sending our soldiers there would prevent a genocide of Christians and U.S. allies. The region is outside the Turkish “safe zone,” so it’s not covered by Washington’s cease fire deal. President Trump could pick up the phone and give that order, with no major repercussions for America. Or will we trade Christian civilians’ blood for oil?

If our troops can guard Mecca for the Saudis, and oil wells, they can and should stop a genocide. It’s the least we Christians can demand from a president who needs our support in 2020. Sen. Lindsey Graham has brought the president a plan that would secure both the oil and the heartland of Syrian Christians, ideally using European air forces to help impose a no-fly zone over the region. The president should support it.

Absent this single gesture of national self-respect and honor, Trump really will have his own “personal Vietnam.” He’ll have his own Saigon 1975, and his very own killing fields, on his conscience.

I don’t want them on mine.