Trump’s — No, Wait — The Republican Debate

Winner? No question about it, it was Trump at a canter. This was conceded even before the debate began in the under-card where the four folks who couldn’t make prime time were asked questions not about themselves, but about Trump. They took it well, though, like those golfers who had just won a tournament back in the day Tiger Woods was at the top and who were asked, “How do you think your victory affects Tiger?”

The situation was repeated during the main event, where one of CNN’s not-so-bright panelists announced he didn’t want a cage match, but then started goading other candidates to bash Trump. At one point when Trump and the walking-dead Bush were going at it, CNN switched to a split screen so we could see what kind of faces Trump was making.

Cruz was twice offered the chance to go after Trump. He refused. Trump never rose to the bait either. Trump even patted Cruz on the back and announced Cruz had a wonderful temperament after CNN’s panelist started chanting, “Fight! Fight! Fight!” 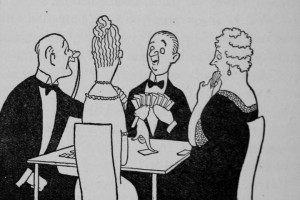 And what was the big story immediately after the debate? Trump’s pledge to stick with the Republican party and not run as a third party candidate.

It’s not only that, but Trump actually gave reasoned, responsible, real answers to (most) questions. There were no explosions, though they were undoubtedly hoped for. Trump was the only one calling out the idiotic idea that global warming — he said it properly: global warming, not “climate change” — was our scariest threat. Trump even pushed past some odd audience boos. (Where did they get that audience anyway?) Face it, the man never backs down. That, for many, is obviously his appeal.

Contrast him with Fiorina and Kasich who, whenever voices were raised, nervously jumped in and tried to make happy-happy, Kasich doing his best Rodney King imitation and Fiorina threatening to send the boys to the quiet corner. Incidentally, Fiorina actually listed having breast cancer as a qualification for the presidency.

Like him or not—and I am here neutral—Trump was the best communicator. Not always a polished, reasonable, or correct-on-facts communicator, but expert at conveying his thoughts in succinct and memorable ways. If you watched the debate, you can prove this to yourself: How many lines from Christie, Bush, Carson, Rubio, Paul, or Fiorina do you recall, or rather, that you wish were repeated?

Now I was watching Twitter as the debate progressed, and I saw an occasional remark from an old-guard media denizen assuring us that Trump would not be the nominee. Given that these pundits have been wrong consistently about the man, it doesn’t seem rational to give this prognostications much weight.

It’s clear enough the progressives at CNN, the donor class of Republicans, along with its party-first constituencies, and many others,would rather not have him as the nominee — some for very good reason (Trump, for instance, spoke in favor of paying farmers to turn corn into harsh, expensive fuel, which I think is asinine: oops, there goes my neutrality). Many of these folks fret that Trump could not beat Hillary. Incidentally, everybody but everybody spoke of her as the other nominee.

I’m skeptical. Trump could very well be Reagan to Hillary’s Mondale. He would wipe the floor with her. Her cackling laugh which she uses to deflect uncomfortable questions wouldn’t fly with Trump, but it’s a good guess all of the other nominees, save Ted Cruz, would be deferential.

What about the other contenders? The under-card can be dismissed. Kasich, Bush, Fiorina, Paul, and Christie haven’t a chance. The once front-runner Ben Carson looked, more than once, like he wanted to be back home in bed (to which we all sympathize). Rubio, a party loyalist, is for amnesty, though he managed to avoid saying the word, and in this election cycle that’s a seriously liability. Cruz has a chance and has what many non-party-first Republicans want, but does he have what Trump has?

During one of the many breaks, Trump, Cruz, and Carson trio-ed off to have what appeared to be an amicable chat. That and many of the other gestures say it’s better than even money that if Trump becomes the nominee, Cruz would be his VP choice. Carson would be given something. Secretary of Education? Surgeon General?

It remains to be seen what gifts the other candidates would be given, if any.