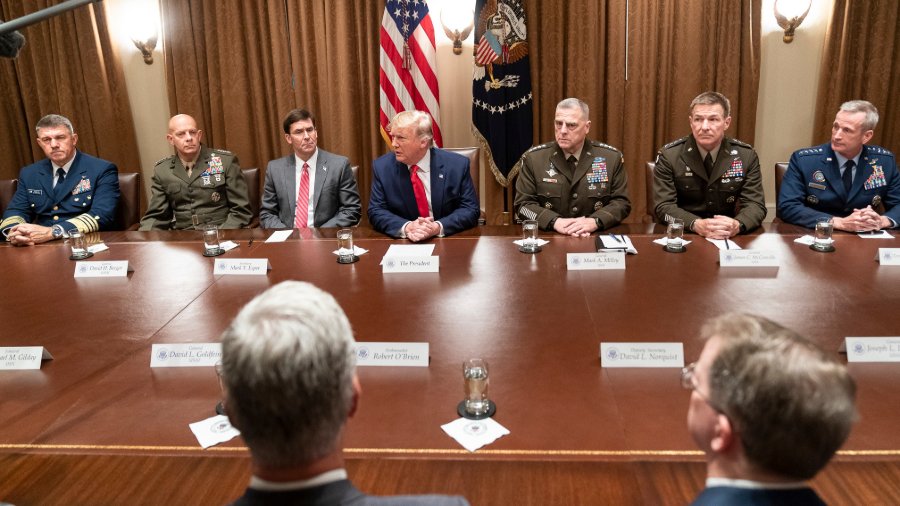 President Donald Trump answered questions from the press about his decision to withdraw troops from Syria during a briefing with senior military leaders on Oct. 7, 2019, in the Cabinet Room of the White House.

Last week President Trump announced his decision to withdraw fewer than 100 Special Forces soldiers from northern Syria. Since then, both the Left and Right have been playing Brutus to his Caesar. Most commentators, on both sides of the spectrum, are stabbing at him with steely knives of ignorance. The Stream‘s John Zmirak is an exception. Although not a Middle East expert, he knows more about the region than many PhDs. And I almost always agree with him — but not, entirely, this time.

Response to John Zmirak’s “What’s Happening in Syria? A Guide for the Perplexed”

John raises thoughtful points in his recent article. The four most important, in my opinion, are:

Under President Erdoğan Turkey has practiced benign neglect toward ISIS. Ankara, for a while, allowed foreign jihadists to access Syria through Turkey. The Turks have also turned a blind eye to jihadists in their hospitals. And they greenlighted Turkish companies purchasing ISIS-supplied oil. But this hardly equals resurrecting Ottoman jihad against the West. It’s much more a case of the enemy of my enemy being my friend. How so? The Turks have fought Kurdish separatists for 35 years. The PKK has led this guerrilla war inside Turkey. The PKK was hard-core Marxist for many years. It “moderated” only once its leader, Abdallah Őcalan, was captured. The PKK now favors “democratic confederalism” for Turkey’s Kurds. But it’s still violent. It’s also been implicated in the drug trade, making money off heroin shipments from Afghanistan.

The YPG, the armed wing of the PYD (Kurdish Democratic Union Party), is an off-shoot of the PKK. And the YPG is the group doing much of the heavy lifting for the Syrian Democratic Forces fighting ISIS. Thus, the U.S. has been arming and assisting a group that favors degrading a NATO ally’s territorial integrity.

In fact, a YPG front group called the “Wrath of Olives Operation Room” targets Turks in north-west Syria. It employs assassinations, kidnappings and car-bombings. Furthermore, the PYD’s ideological platform includes “eco-socialism” and “anti-capitalism.” While better than Quranic decapitation, those are not exactly pro-American beliefs.

Many other SDF groups pose problems, too. Al-Sanadid Forces hate ISIS but also want to overthrow U.S. ally Saudi Arabia. They hope to revive the post-World War I Shammar Emirate. The Syriac Military Council is Assyrian Christian. But its ideology is “revolutionary socialist.” It’s also allied to the PKK.

Arab Sunni fundamentalists make up the Revolutionary Brigade of Raqqa. This organization only found democracy in 2015 when caught between ISIS and the YPG. The Army of Revolutionaries oppose ISIS but hate Shi`is, too. The Uways al-Qurani Brigade split off ISIS and joined the SDF mainly for revenge. The Martyr Nubar Ozanyan Brigade is Armenian Marxist, so anti-Turkish as well as anti-ISIS. This isn’t exactly a group of folks longing to breathe free in order to peruse The Federalist Papers.

Erdoğan may be swaggering, overbearing and tin-plated, with delusions of godhood. But he’s not actually a dictator. Because he has won numerous elections in Turkey. These include Mayor of Istanbul, Prime Minister, and President. Dictators normally only win one. The first. And the definition of “terrorist” does not hinge on the system being targeted. It depends, rather, on the tactics used by the group itself. This means, at a minimum, violence directed against noncombatants for a political end. Labeling Turkey’s system as dictatorial has no bearing on whether the PKK and YPG are terrorists.

Is Turkey an Ally?

“Turkey’s in NATO, but it’s hardly an ally.” Actually, it is. As Andrew McCarthy says in his piece from last week, “I would be open to considering the removal of both the PKK from the terrorist list and Turkey from NATO. For now, though, the blunt facts are that the PKK is a terrorist organization and Turkey is our ally.” In fact, under NATO rules an attack on one member is considered an attack on all. Therefore, the U.S. should by all rights be helping Turkey against the PKK and the YPG.

There are three major Muslim powers in the Middle East. Turkey, Iran and the Kingdom of Saudi Arabia. Which one is most like us? It’s certainly not Twelver Shi`i Iran. Nor schizophrenic Saudi Arabia, our political ally which is fundamentalist Sunni Muslim. It’s Turkey, the most Westernized majority-Muslim country in the region. And the nation-state with the most legitimate claim to lead the Islamic world is Turkey. Erdoğan is problematic. But, like troublesome sultans before him, will eventually exit the scene. In the long-term, American and Turkish regional interests align in many ways. We both distrust Iran. Neither of us wants to remake the map of the Middle East. And Turkey gives the West a bridge into the Islamic world. President Trump, to his credit, realizes that.

Trump has come up with a new one. He avoids isolationism, on one hand, and remaking countries in our image, on the other. Some call this “principled realism.” It rests on four pillars. Protecting the American homeland, promoting American prosperity, preserving peace through strength, and advancing American influence. Only the last is risked by Trump pulling our troops from northern Syria. Yes, we lose influence with some Kurds. But in return we gain better relations with crucial Turkey. In the final analysis, nations do not have friends — only interests. It is in America’s interest to align with Turkey, not the Kurds. That is unfortunate. But it is also true.

Late-breaking addendum: as I finished this, news broke that the Syrian Kurds are allying with the Assad government in Damascus. This creates a Kurdish-Alawi alliance against Turkey. But it also threatens ISIS. Why? Because both the Kurds and the Alawi regime oppose Islamic fundamentalism. It also bolsters the viability of the Syrian state. This is a positive development. The last thing the Middle East needs is another failed state in which jihadists can simmer.