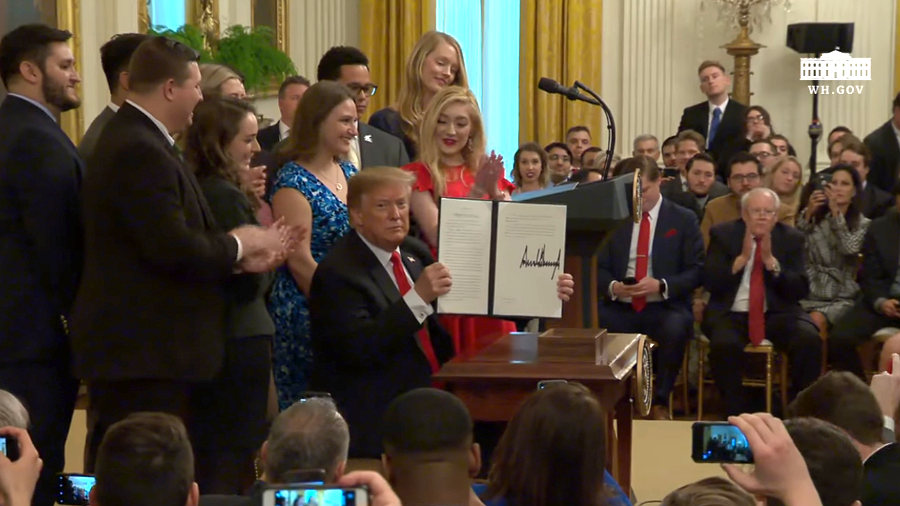 This year at CPAC President Trump promised an executive order protecting free speech on college campuses. He issued that order on Thursday. But the order also tackles two other significant topics. Let’s break it down.

Over 100 college students whose speech had come under scrutiny were on hand for the announcement. “Taxpayer dollars should not subsidize anti-First amendment institutions,” the President said. Trump is not targeting federal student loans, used by a majority of students at almost all accredited colleges. His target is federal research dollars. These funds are mainly dispersed to graduate school-oriented universities, both public and private non-profit.

Trump is directing 12 federal grant-making agencies to coordinate with the Office of Management and Budget. These agencies include the Department of Energy (DOE) and the National Science Foundation (NSF), two popular sponsors of scientific research. The goal is to make sure schools receiving federal research funds comply with existing federal law and regulations dealing with free academic inquiry.

The order requires schools to do what they’re already supposed to be doing.

Critics charge it with being merely symbolic, as it doesn’t spell out means of enforcement. For example, Peter McPherson, president of the Association of Public and Land-grant Universities, says it is unneeded.

Still, as with orders issued in the Obama era, I would expect it to make some difference. Would a university want to risk access to millions of research dollars by silencing dissent? We’re not just talking about conservative students being allowed to express themselves, although that’s where the media focus has been. The order’s call for “free inquiry” should extend to scholars raising qualified objections to majority positions on academic topics. One example: air pollution. Or a university’s specific form of anti-bias training. The executive order says “competing perspectives” should not be stifled. It reasons that it would “undermine learning” and “impede” the kind of research from which society benefits.

The order requires the Education Department to publish program-level data in the College Scorecard on measures of student outcomes. That includes figures like median earnings, median student debt, student loan default rates and loan repayment rates. Right now, you can get college-level data. But it’s not broken down by program, like computer science versus biology.

This expansion of the College Scorecard data is consistent with what Education Secretary Betsy DeVos announced last August. Namely, that better accountability and consumer protection would come by publishing student outcome data for all colleges across all programs. The Obama-era gainful-employment rule, which DeVos rescinded, mainly applied to vocational programs in the for-profit sector.

The executive order also says that by the end of the year the Department of Education will unveil a single website for student borrowers. It would allow them to see their loan balance, their monthly payment when entering repayment and their available repayment options. This will help students make informed decisions on how much to borrow, semester-by-semester, as they advance toward their degrees.

The order gives Trump officials until the end of the year to report on how the government, the colleges and anyone else might share student loan risk. Right now, the risk is entirely the burden of the student (and the parents, if they co-sign). A risk-sharing proposal might require a college to pay some or all of a student’s loan, should that student prove unable to make his or her payments. Tucker Carlson of Fox News has recently argued for risk sharing.

What incentives would risk sharing create? I’d imagine college admissions departments would be more careful about who they let in. That may mean enrolling fewer poor students, since they typically depend more on student loans. Sadly, they’re also the least likely to graduate. The problem is that these are also the students with the most to gain from a college degree, particularly in  high-demand fields. Social mobility matters, so I would hope the plan would take this into account.

Perhaps Trump’s officials will also consider promoting income-share agreements. It was Milton Friedman who said that debt isn’t the best way to fund education. That’s true, he says, no matter who’s on the hook to pay. Since education gives a borrower no collateral, and since the financial returns to education vary widely, equity is a better funding mechanism.

What if instead of lending the money, the government, the universities, and/or private investors purchased a specified fraction of a student’s future earnings, for a specified period of time? As with the risk-sharing concept, the fortunes of the stakeholders would rise or fall together. But it avoids saddling students with debt they can’t escape even in bankruptcy.