Trump to Recognize Israeli Sovereignty Over the Golan Heights 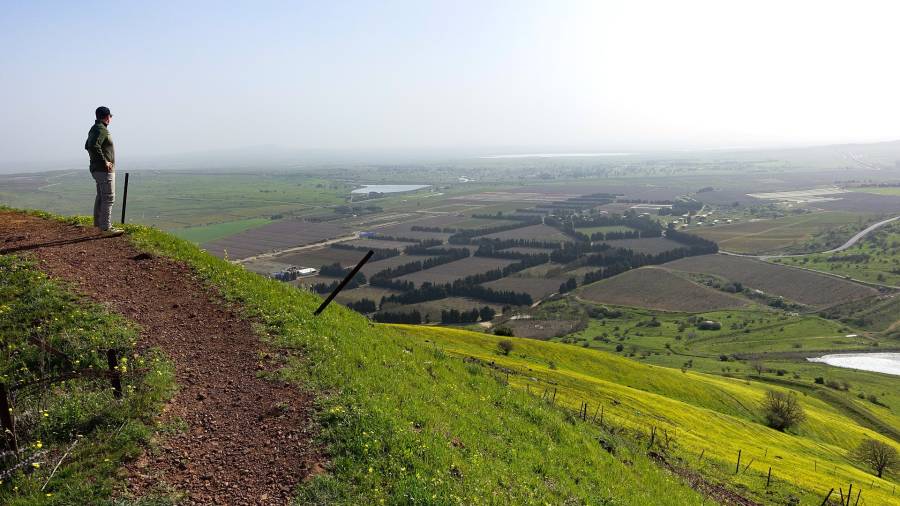 In a bold move that may well foreshadow his long-awaited Middle East Peace Plan, President Trump announced Thursday that the U.S. will “fully recognize” Israel’s sovereignty over the Golan Heights.

After 52 years it is time for the United States to fully recognize Israel’s Sovereignty over the Golan Heights, which is of critical strategic and security importance to the State of Israel and Regional Stability!

At a time when Iran seeks to use Syria as a platform to destroy Israel, President Trump boldly recognizes Israeli sovereignty over the Golan Heights. Thank you President Trump! @realDonaldTrump

“We have a Purim miracle here,” he said, according to the Jerusalem Post. “President Trump made history. He recognized Israel’s sovereignty on the Golan at a time when Iran is trying to use the Golan as a platform to destroy Israel.”

Purim is a Jewish holiday commemorating the saving of the Jewish people from Haman, who was plotting to kill all the Jews in ancient Persia. (The current-day Iran.) We find that story in the Book of Esther.

The Golan Heights, a volcanic plain 1,650 feet above the Sea of Galilee, is a strategic strip of territory on the border of Israel and Syria. From this perch, Israel’s enemies would be able to rain hellfire down on the Jewish people. Israel gained the territory from Syria during the Six-Day War in 1967. The Jewish state annexed the Golan Heights in 1981. Previous administrations have referred to the Golan Heights as “occupied” territory.

However, last week, as the Times of Israel reports, “the State Department dropped the phrase ‘Israeli-occupied’ from the Golan Heights section, instead calling it ‘Israeli-controlled.” Speculation had been that Trump would make an announcement recognizing the Golan Heights during Netanyahu’s trip to the U.S. next week. Instead, the announcement came as Secretary of State Pompeo is in Israel. The Bible Speaks of Battles Over This Same Territory

Although the Golan Heights was made part of Syria with the creation of the Syrian state in 1918, the plateau has been fought over for many millennia. Moses gives this account in Deuteronomy 3 of the defeat of King Og of Bashan.

When we turned onto the road that leads to Bashan, King Og of Bashan led out his whole army to fight us at Edrei. But the Lord told me, “Moses, don’t be afraid of King Og. I am going to help you defeat him and his army and take over his land. Destroy him and his people, just as you did with the Amorite King Sihon of Heshbon.”

The Lord our God helped us destroy Og and his army and conquer his entire kingdom of Bashan, including the Argob region. His kingdom had lots of villages and sixty towns with high walls and gates that locked with bars. We completely destroyeda]”>[a] them all, killing everyone, but keeping the livestock and everything else of value.

Sihon and Og had ruled Amorite kingdoms east of the Jordan River. Their land stretched from the Arnon River gorge in the south to Mount Hermon in the north, and we captured it all. Mount Hermon is called Mount Sirion by the people of Sidon, and it is called Mount Senir by the Amorites. We captured all the towns in the highlands, all of Gilead, and all of Bashan as far as Salecah and Edrei, two of the towns that Og had ruled.

As the Associated Press reported in 2011, during the Old Testament period the Golan Heights were “the focus of a power struggle between the Kings of Israel and the Aramaeans who were based near modern-day Damascus.” Archeologist Moshe Kohavi told the AP the same geo-political considerations remain in play today: “Whoever holds the high ground has a strategic advantage.”

Today’s announcement comes as anticipation mounts for the expected roll-out of the President’s Middle East Peace Plan. Trump says he won’t reveal the plan until after Israel’s election April 9.

Trump and son-in-law Jared Kushner, who is spearheading the effort, have been tight-lipped about the details. However, a new book out Tuesday critical of Kushner alleges to have seen early drafts of the plan.

The plan, according to author Vicky Ward, included land swaps. For example, Jordan would give land to the Palestinians and “in return, Jordan would get land from Saudi Arabia, and that country would get back two Red Sea islands it gave Egypt to administer in 1950.” Also, the draft included plans for an “oil pipeline from Saudi Arabia to Gaza, where refineries and a shipping terminal could be built. The profits would create desalination plants, where Palestinians could find work, addressing the high unemployment rate.”

However, White House Middle East envoy Jason Greenplatt shot down the report. “No one who has seen the plan would spread misinformation like that. Whoever made these claims has bad info.” Added Greenplatt, “A lot of people are sharing false info with the press now for bad reasons.”

Kushner spoke broadly about his plan during a five-nation tour of Gulf Arab states in February. Al Jazeera reported he was in the region to focus on the economic component of his plan. In an interview, Kushner said the proposal also contained a “political plan, which is very detailed” and “really about establishing borders and resolving final-status issues.”

“The goal will be to focus on developing the infrastructure, the rules, the training for a lot of the people so that you can bring a lot of opportunities and prosperity to the region.”

Regardless of the details, it is clear Trump’s “deal of the century” does involve getting Israel’s Arab neighbors involved, and does involve some thinking outside the box. Kuwait’s foreign ministry offered his support. Sheik Sabah Khaled Al-Sabah said he believed the U.S. has “the necessary ideas” to “elaborate a peace plan that will take into account the situation in the region, and other relevant stakeholders.”

5 Things You Need to Know About the Israeli Elections