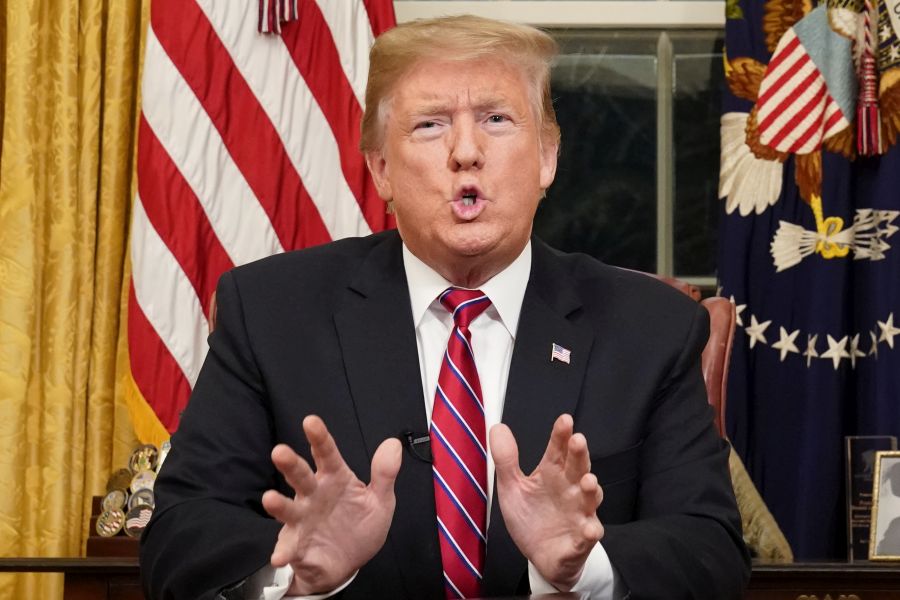 President Donald Trump speaks from the Oval Office of the White House as he gives a prime-time address about border security Tuesday, Jan. 8, 2018, in Washington.

The difference between President Trump’s speech Tuesday night and the response of Speaker Nancy Pelosi and Sen. Chuck Schumer can be summarized very simply: Trump made the border security issue about protecting you and me and even those attempting to enter the country illegally. Pelosi and Schumer made it about Trump.

After all, there was nothing, nada, zippo that Trump is suggesting that Schumer, in particular, hasn’t already supported in the past. As Trump said, the only thing that changed is he was elected.

Pelosi, Schumer and their media acolytes repeatedly used their latest talking point. “Manufactured Crisis.” I wonder how much they paid the consultants to focus group that one.

But in a sense, they are right. The illegal immigration issue is a manufactured crisis. It was greatly manufactured in the mid-1980s when Democrats promised Ronald Reagan strong border security in exchange for amnesty … then reneged on the deal after amnesty was granted. Strong measures were never put in place, a millions and millions of more people came flooding in. The latest estimate puts the figure at 22 million.

It was manufactured some more when President Obama, by his own admission, dismissed a little thing we call the Constitution, and by dictatorial fiat created whole new classes of legalized citizens. In doing so shouted loud enough to be heard in Central America, “Come on over, there’s papers and a public trough to be had if you just make it here!”

Obama also manufactured another aspect of our border crisis when he stymied the DEA’s “Project Cassandra,” which was working to roll up the terror group Hezbollah’s billion dollar a year smuggling partnership with Latin American drug lords.

Of course, these things are not what Pelosi and Schumer mean by a “manufactured crisis.” They mean the President is hyping the dangers posed our nation by unfettered illegal immigration. He’s making it up, Schumer said, to cover for the chaos within his Administration.  As if wrestling over immigration reform hasn’t been on the main card in Washington since Trump was still married to Ivana. Again, Schumer was pushing for a border wall when Trump was still hosting The Apprentice.

California Sen. Kamala Harris Tuesday spoke of The Wall as Trump’s “vanity project.” When she’s running for president next year, we’ll have to remember Harris thinks keeping campaign promises is “vanity.” How dismissive. How predictive. Why would Trump need another vanity project anyway? He’s already got buildings all over the world with his name on them. (Meanwhile, you want to talk vanity? How often did Obama discourage people from calling the health care system drawn up by Congress Obamacare?  But I digress.)

Schumer and Pelosi urged the president to “re-open the government and we can work to resolve our differences over border security.” We’ve seen repeatedly what happens when Republican presidents give Democrats what they want now in exchange for border security later. Given the shaft so often you could build a wall with the metal.

Sorry, Lucy, you’ve pulled the football away far too many times.

Schumer accused Trump of having a “temper tantrum” with his refusal to sign any budget resolution without funding for a border barrier. Problem for Chuck is, not many Americans pay attention to the day in, day out games in Washington. However, with all the networks covering a prime time address from the Oval Office, a bunch more eyes were paying attention. Getting to see the two sides back-to-back. They saw Trump somber, serious, reasonable, inviting, accommodating of Democratic requests and — oh, my gosh! Dare I say it? Presidential.

This is about whether we fulfill our sacred duty to the American citizens we serve. When I took the oath of office, I swore to protect our country and that is what I will always do. So help me God.

When you follow up Trump by standing side-by-side with the wide-eyed Pelosi and basically say “that meany is keeping the government closed!” who looks like they’re having the tantrum? Which gets to the next point. Why are Democrats acting surprised Trump is refusing to give in and sign budget bills without money for a border barrier? He agreed early last year to a major budget without wall funding, declaring he would not do so again, even if it meant a government shutdown. They were warned.

How warped is Washington that doing what you say you are going to do is seen as a major affront?

The Leaders Now Head to the White House

President Trump has invited Congressional leadership over to the White House for talks today. And he is right. They could have this thing taken care of in 45 minutes, with enough time left over tea and crumpets. A deciding factor will be if Americans believe Trump had Schumer and Pelosi’s lunch last night.

Did he convince Americans that a steel fence is necessary and reasonable? Will the Democrats agree to the fence, then shout victory because Trump didn’t get his “Wall,” nor did Mexico pay for it?

That would seem to be an easy, reasonable way to help solve the issue, secure the border and end the shutdown.

However, shaking hands on a deal also means Dems would be shaking hands with their devil. And when the choice comes between helping America and hating Trump, the sad truth is the party is more likely to opt for the latter. (Especially with the Open Borders, Abolish ICE, Sanctuary Cities forces screaming in their ears. Does Pelosi really want the headache of seeing Alexandria Ocasio-Cortez pouting and spouting on MSNBC as if grandma had taken away the car keys?)

So the question of the hour is: Will the Democratic leadership do right by the nation or will they do the bidding of the Resistance? Will they put America citizens first or non-citizens?

President Trump has laid out his case, and set out his proposal. Let’s see if Schumer and Pelosi pick up the baton … or lay an egg.

UPDATE: And answer is “egg.” President Trump got up and walked out of his meeting today with the Democratic leaders after Nancy Pelosi refused to agree to funding a border barrier.

Just left a meeting with Chuck and Nancy, a total waste of time. I asked what is going to happen in 30 days if I quickly open things up, are you going to approve Border Security which includes a Wall or Steel Barrier? Nancy said, NO. I said bye-bye, nothing else works!

Chuck Schumer describes a meeting he just had with President Trump: "Unfortunately, the president just got up and walked out. He asked Speaker Pelosi, 'Will you agree to my wall?' She said no. And he just got up and said, 'Then we have nothing to discuss,' and he just walked out" pic.twitter.com/vFigwieLYL

Returning to his meme from last night, Schumer called the president walking away a “temper tantrum.” No, Chuck. It’s called walking away when the opposing side is playing games. It’s called doing his sworn duty to protect the American people. You might want to try it some time.

In their response last night, Chuck Schumer and Nancy Pelosi urged Trump to separate the shutdown from the border security issue. Re-open the government, then negotiations will continue. That was a lie. A sham. The Democrats have no intention of agreeing to any additional barriers.

The Democrats now own the shutdown, and the blood of any innocent American who perishes as the result of our porous border and contorted immigration system.

Al Perrotta is the Managing Editor of The Stream, and co-author with John Zmirak of The Politically Incorrect Guide to Immigration.