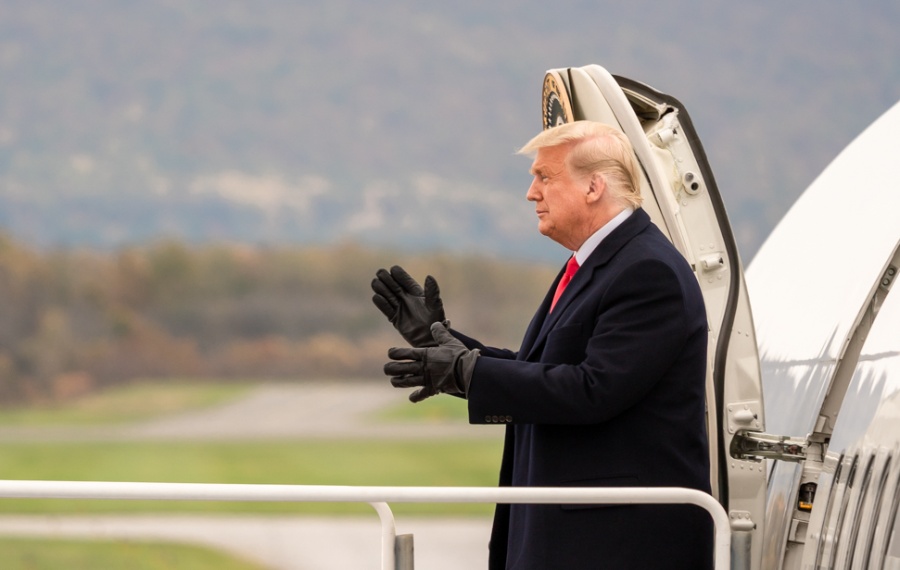 While Joe Biden was enjoying the surf in Rehoboth Beach the past week, Donald Trump was making waves.

Trump Talking Like He’ll Be Returning to the White House

In his North Carolina GOP Convention speech Saturday night, and in other appearances, the former president was acting as if a return to the White House is a given. A done deal. Just a matter of time.

For example, in a video released just before his speech, Trump predicted “We’re going to take back the White House sooner than you think!” Trump aides and lawyer Jenna Ellis insist “sooner than people think” does NOT refer to him being re-installed as president, even if Arizona and other states prove he actually won. But it sure does fuel the internet rumors.

Also, after Facebook announced it was banning Trump for two years, his Save America PAC email list got a note from Trump: “Next time I’m in the White House there will be no more dinners, at his request, with Mark Zuckerberg and his wife. It will be all business!”

If He’s Not Returning, He’s at Least Running

Even if a return to the White House isn’t a foregone conclusion, Trump is certainly sounding like someone with an eye on the 2024 race.

When asked if former VP Mike Pence would be on the ticket, Trump replied he and Pence “get along great … but it’s too soon to be discussing a running mate.”

(My early chips are on Trump saying Pence will be his Secretary of Defense or State, leaving him free to run with a fresh face, while not discarding his loyal VP.)

And the Becoming Speaker Idea is “Very Interesting”

There’s this idea floating around. Florida is getting a new, additional congressional seat. What if Trump runs for that? He wins, and if the GOP wins control of the House in 2022, what if he’s named Speaker? (Technically, as Ari Fleischer notes, a Speaker doesn’t even have to be a member of the House. Trump could just be voted Speaker if Republicans take over.)

When presented the idea of becoming Speaker by radio host Wayne Allen Root, Trump said he finds the suggestion “very funny” and “very interesting.” Oh, it would be hysterical. And as Root notes, Trump becomes Biden’s “worst nightmare.”

Speaker of the House Trump can open a dozen criminal investigations against Biden. He can lead the impeachment of Biden (how ironic would that be?). He can block every single Biden bill. He will stop the Biden agenda dead in its tracks.

And don’t forget, Speaker of the House Trump can sit behind Biden for each State of the Union address. I can’t wait to watch that.

Admit it. It’d be worth it just for entertainment value. CSPAN would get higher ratings than CBS.

However, more intriguingly, suppose enough states end up proving fraud that there is no doubt Trump legitimately won? But there is no way constitutionally to do a switcheroo. You’re never going to get enough Democrats to go along with a double impeachment that would make Speaker Trump president. However, isn’t it a reasonable compromise having Trump as Speaker? The true victor at least heading one of the equal branches of government? Also, it’d mean that Biden-Harris would have to go through him to get anything done. That opens the door to real bipartisan cooperation.

FYI: Just the News lays out some of these scenarios in detail.

Already Campaigning Against Biden: “All He Had to Do Was Nothing”

You can say Donald Trump is already campaigning against Joe Biden for 2024. In his North Carolina speech and beyond, Trump is ripping Biden for all the disasters that have befallen the nation thanks to Biden’s actions.

“All he had to do was nothing,” Trump says. “If he would have done nothing, we would have had right now the strongest border in history,” he told Newsmax. Similarly, all Biden had to do is leave Keystone and other energy projects going and we’d still be energy independent. Not reenter the Paris Climate Accords, not reverse course with Iran. Not harm the economy to slow the COVID recovery. And so on and so on.

Though Not Done With 2020: Trump Calls for Pennsylvania Audit

As much as Trump seems keen on running in 2024. He’s not done with 2020 by any stretch of the imagination.

Trump is calling on Pennsylvania’s GOP controlled State Senate to conduct a forensic audit of the 2020 vote. Last week, a group of Pennsylvania elected officials went to Arizona to scope out the ongoing Maricopa County audit.

“The people of Pennsylvania and America deserve to know the truth,” he said in a statement, “If the Pennsylvania leadership doesn’t act, there is no way they will ever get elected.

For just one example of why Pennsylvania needs close scrutiny, revisit this stunning article from Revolver. One suspicious ballot dump in one county made an enormous difference in the tally.

President Trump announced Monday he’s hitting the road with Bill O’Reilly for a four-city tour in December. Dubbed “The History Tour,” the conversations “will discuss exactly how things were accomplished, as well as challenges, both good and bad.”

Only three of the four sites are known: Sunrise, Fl., Houston and Dallas.

Trump predicts the events will be “wonderful, but hard-hitting sessions.”

“I will be focusing on greatness for our Country, something seldom discussed in political dialogue, If we don’t make our Country great again, we will soon no longer have a Country!”

Added the former president, “Additionally, it will be fun, fun, fun, for everyone who attends.”

You won’t have to wait until December. Trump is revving up for rallies this summer. So far, Florida, Georgia, Ohio and North Carolina are on the itinerary.

Trump on Fauci: “Not a Great Doctor, But a Helluva Promoter.”

Fun is certainly what you get at a Trump event. That’s a reason 2 million viewers tuned into RSBN’s YouTube alone for Trump’s North Carolina speech. Another 1.8 million tuned into Newsmax. (You saw that right. 3.8 million … for a speech to a state convention. On a Saturday night. In the spring. For the guy who supposedly lost.)

For example, after riffing on Fauci, Trump let loose this epic putdown.

He also told the poignant, heartbreaking story of what it is like going to Dover AFB to accept the remains of service men and women lost overseas.

"I’d see the same people that were talking to me so jubilant about their child, how great the child was, would start screaming, screaming. Screams like I’ve never heard before.” pic.twitter.com/A9TQFAKEom

A stark reminder that being commander-in-chief, and President of the United States, isn’t cookies and ice cream.

But the media? All they wanted to talk about was Trump’s pants.

Boy, do they miss him. But by his own account, he’ll be back “sooner than you think.”