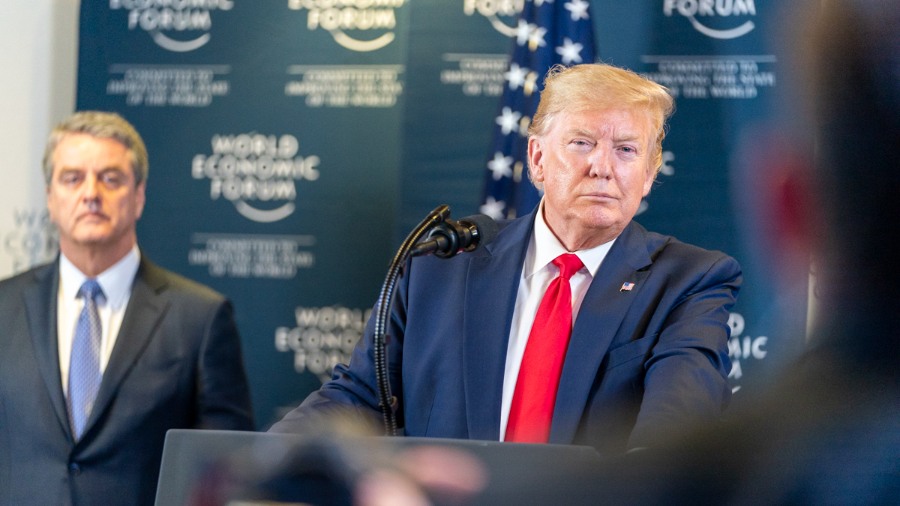 In this Jan. 20, 2020, file photo, President Donald Trump participates in a press conference at the 50th Annual World Economic Forum meeting at the Davos Congress Centre in Davos, Switzerland.

My question: Where are we getting our information? These emails sounded more like sound bites from anti-Trump news outlets than people doing their own thorough research. The media is quick to doctor numbers, erase information, take things out of context, and outright lie to make Trump look bad.

So-called “lies” may actually be actually differences of opinion rather than of facts. When the president says that this is the “best economy ever,” that can be supported by some and refuted by others. One pundit said it’s a lie because, in his opinion, the economy under Lincoln was much better. I’m currently reading A. Lincoln: A Biography by Ronald C. White — and I can assure you, based on my understanding of economic health, Lincoln’s economy was not as strong as ours.

Some say Trump inflates numbers and stats. But statistics can vary greatly depending on the person’s agenda and presuppositions. A national economist who hates the president will say he is off on the numbers, but an investment banker who has a pulse on the economy will say that he is right on. And statistics is often the art of deceiving with numbers anyway.

Sometimes it’s just incorrect information. Many Christian speakers, from the late Billy Graham to current pastors and preachers, have given out stats in their sermons and then found out their sources were wrong. This isn’t lying. It’s human. So is simple forgetting. I recently said, “I think that 85 percent of all lottery winners end up losing their money in the end.” It’s actually around 70 percent. Critics would undoubtedly level charges of lying against me too.

Trump is not perfect. He has lied and will lie (we can simply look in the mirror to validate this truth). But is he improving, learning, and growing? Is he looking out for the American people, in accordance with Romans 13? Much of what we hear about Trump is actually designed to mislead the public. Those saying that he lies are actually the ones doing the deceiving.

Others ask, “His values don’t line up with the Bible. Aren’t we straying from God when we support him?” I’ve addressed this in the column I mentioned at the beginning. Beyond that, though, we must wrestle with the question, What if God put him in office? God used pagan kings to accomplish his purposes — from Cyrus to Artaxerxes and many others. Regardless of who is king or president, the key questions to ask are: What direction is the leader taking us and our children, and where is he seeking counsel? Is he really trying to honor God through legislation?

President Trump has an incredible team around him offering spiritual advice daily. Can you imagine having people like Jack Graham, Jim Garlow, James Robison, Jack Hibbs, and countless others speaking into your life? We should be extremely thankful our president is listening to such leaders. I find it ironic that many of the never-Trumpers fail to take this into consideration. We should be shouting with joy rather than having sour looks on our faces.

God often uses broken and flawed leaders. Based on critics’ reasoning, my past just a few decades ago would disqualify me from becoming a pastor. Struggling with dyslexia and reading disabilities and having graduated high school with a 1.8 GPA, I should not be writing as I am here, or speaking on the radio. Critics will laugh at me, but many others will be encouraged. If God can use Shane Idleman, He can use me, too, if I repent and turn to Him. I am flawed, broken, and utterly dependent on God, and I’m not ashamed to admit it. My strength actually comes from my weakness (2 Cor. 12:9-11).

Look at What He’s Getting Done

We are not supporting President Trump’s past lifestyle. We are supporting a movement back to God. God may use unlikely candidates to accomplish His purposes. Innocent children are being protected, godly counsel surrounds President Trump, terror is being restrained, good judges are being selected, socialism is being resisted, employment is at an all-time high, prayer is being brought back in schools, God’s wisdom is being sought, and on and on it goes. I’m more concerned with our country’s national character than I am with the president’s personal character.

“But what about all the examples in the Old Testament of ungodly kings causing Israel’s depravity and, ultimately, their judgment?” There is an enormous difference — those kings were leading the nation away from God and into false worship to Baal, often even sacrificing their children. We are still sacrificing children today on the altar of Planned Parenthood. But today, our leader is supporting a return to God. He’s fighting against the massacre of innocent children.

Yes, I wish I could edit the president’s tweets, but he wants to bring prayer back into the schools. Yes, I wish his words were seasoned with grace, but he is attempting to remove the muzzle of the Johnson Amendment. Yes, I wish we’d see more apologies and humility, but he appoints God-fearing judges and protects innocent babies. I could keep going if you’d like — such as more sex-trafficking arrests than all other presidents. I’m amazed at how anyone can overlook these things.

Let me leave you with this final thought: Can you honestly look into the face of a precious baby whose life is about to be terminated by being removed limb by limb from the mother’s womb and say, “I’m truly sorry, but I could not vote for Trump. I don’t like his character.” It forces the painful question: What would that say about your character? If that is really the position of the American Christian, God help us.

Shane Idleman is the founder and lead pastor of Westside Christian Fellowship in Southern California and the creator of the WCF Radio Network. His program, Regaining Lost Ground, points us back to God and reminds us that although times change, truth does not. His books, blogs, and sermons can all be found at ShaneIdleman.com. Pastor Idleman offers three additional resources with today’s article: