Christian pastor and American citizen Andrew Brunson has now been held in Turkey for over 20 months. "We are not going to take it sitting down," said President Trump on Friday. 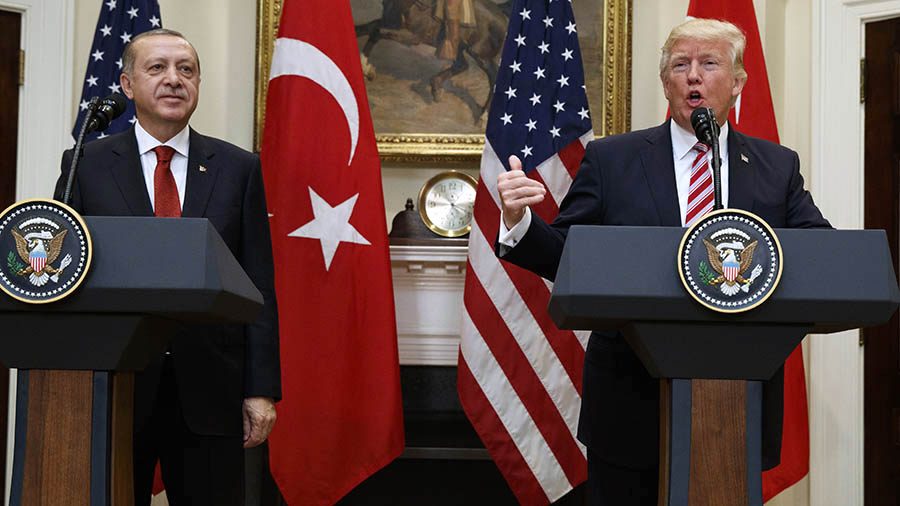 President Donald Trump, accompanied by Turkish President Recep Tayyip Erdogan, addressed reporters in the White House on May 16, 2017. In recent months, the relationship between the two nations has declined as Turkey continues to detain an American pastor.

On Friday, President Donald Trump addressed the plight of American pastor Andrew Brunson who has been detained in Turkey for nearly two years. “Turkey has, in my opinion, acted very, very badly,” he told reporters on the South Lawn of the White House. “They have a wonderful Christian [man], Pastor Brunson. They should have given him back a long time ago.”

The statement comes as part of an escalating, months-long war of words between the two nations. Recent U.S. sanctions imposed on Turkey have added to an economic crisis for the world’s 17th largest economy. “Failure to reverse this trend of unilateralism and disrespect will require us to start looking for new friends and allies,” said Turkish President Recep Erdogan in a New York Times op-ed last week.

"Turkey has been a problem for a long time… we are not going to take it sitting down. They can't take our people" the president told reporters of American pastor Andrew Brunson, who Turkey accuses of espionage https://t.co/D4Y89a0D04 pic.twitter.com/9D7kY7q1A2

Trump has not been deterred. “They made up this phony charge that he’s a spy, and he’s not a spy,” said Trump on Friday, referring to Brunson. “Turkey has been a problem for a long time. They have not acted as a friend. We are not going to take it sitting down. They can’t take our people. So you will see what happens.”

The veiled threat reveals how suddenly and significantly the relationship between the U.S. and Turkey has deteriorated. The liberty and well-being of a pastor hangs in the balance.

Two Men On a Collision Course in Turkey

The son of missionary parents, Andrew Brunson was born in South Carolina. He graduated from prominent Christian school Wheaton College in Wheaton, Illinois. His home church, Christ Community Church in Montreat, North Carolina has helped sponsor him for decades.

Brunson has lived in Turkey since 1995 with his wife Norine and their three children. He has served as pastor of Izmir Resurrection Church in the nation’s third-largest city. Though recognized as 98 percent Muslim, Turkey’s constitution has long upheld religious liberty. Emerging parallel to Brunson’s ministry during the 1990’s, a Turkish leader had designs on resurrecting the Ottoman Empire. He was Recep Tayyip Erdogan (pronounced “air-doh-wan”), then the Mayor of Istanbul. “Democracy is like a streetcar,” he said in 1997. “When you come to your stop, you get off.”

Author and Middle East expert Joel Richardson has traveled often in and around Turkey. “Erdogan has been projecting his intentions for a long time,” says Richardson. “Now that game plan has come to pass. The treatment of Pastor Brunson is a symptom of their hyper-nationalist anti-Western culture, driven by conspiracy theories.”

Following a decade as Prime Minister of Turkey, Erdogan was elected as the nation’s president in 2014. He signaled his intentions to re-establish a form of Islamist rule. Months into the new regime, the Islamic State in Iraq and Syria (ISIS) threatened those two nations bordering Turkey. The Obama administration accused Erdogan of aiding the terrorists. Yet Vice President Joe Biden later apologized, despite the evidence.

Purging Kurds, Christians and Other Dissenters

Leaders concerned about Erdogan’s Islamist intentions planned to retake the government with democratic aims. On July 15, 2016, their attempt failed. The Erdogan regime claims religious cleric Fethullah Gulen, living in voluntary exile in the U.S., had planned this attempted coup.

Days later, Erdogan declared a state of emergency across the nation. His regime quickly took control of the military, civil service, education and the media. “What Erdogan is really doing is eradicating the last remnants of the secular Turkish state, as he proceeds to turn Turkey into, instead, an Islamic State,” stated professor Glenn Reynolds in USA Today.

“What Erdogan is really doing is eradicating the last remnants of the secular Turkish state, as he proceeds to turn Turkey into, instead, an Islamic State.” – Professor Glenn Reynolds

Since July 2016 more than 140,000 people have been detained in Turkey, according to the website Turkey Purge. A team of journalists in exile uses the site to track ongoing human rights abuses in Turkey. Their reporting reveals how over 3,000 schools have been shuttered and over 300 journalists arrested, among other dictatorial actions.

The purge has been particularly fierce against the Kurds. For decades, this ethnic minority has sought a degree of autonomy within Turkey, Syria and Iraq to no avail. “In terms of oppression in Turkey, the Kurds are first and foremost,” says Richardson. “Look at what happened in Diyarbakır. The Turkish military basically holed up the whole city, imposed a curfew and killed hundreds of innocent Kurdish people.” American pastor Andrew Brunson welcomed Kurds into his church. This put him right in the crossfire. On October 7, 2016, he and his wife Norine were summoned to a police station in Izmir. Within days, she was released. They held him on charges the pastor didn’t even know.

“Because he was ministering to some Kurds, the Turkish government made bogus accusations against him,” says Richardson. “They accused him of being a Kurdish collaborator. Is simply loving on Kurdish people a crime in this country?” Specifically, they linked him to religious cleric Gulen, accused of instigating the 2016 coup.

Brunson has now endured over 22 months in custody. Though Erdogan’s emergency powers were to expire after three months, he continues to exercise them. On July 8, 2018, Erdogan sacked another 18,000 Turkish officials allegedly linked to Gulen.

Pastor Brunson has had three hearings before a Turkish judge this year. Following hours of testimony from secret witnesses, a new date has been set to reconvene. Two Turkish human rights advocates call Brunson’s trial “the most absurd court case in the country’s history.”

Starting July 24, the U.S. hosted the first-ever Ministerial to Advance Religious Freedom. Delegates from 88 nations gathered to commend religious freedom as a central human right. Speaking before officials and nonprofit leaders, Brunson’s daughter Jacqueline Furnari pressed for his release. She spoke of the pain of her imprisoned father missing her wedding.

During the three-day Ministerial, Vice President Mike Pence delivered a pointed message to Turkey. “To President Erdogan and the Turkish government, I have a message on behalf of the President of the United States of America,” stated Pence. “Release Pastor Andrew Brunson now or be prepared to face the consequences.”

If Turkey does not take immediate action to free Pastor Andrew Brunson and send him home to America, the United States will impose significant sanctions on Turkey until this innocent man of faith is free. pic.twitter.com/GM9WohpMRm

This pressure seemed to net some results. On July 25, Brunson was released from jail and placed under house arrest.

However, with this move, reports indicate Turkish President Erdogan reneged on a secret deal. A Turkish dissident had been released on July 14 by Israel, a close U.S. ally. Brunson’s full release had been assured in exchange. After the betrayal, Trump escalated sanctions.

Turkey has taken advantage of the United States for many years. They are now holding our wonderful Christian Pastor, who I must now ask to represent our Country as a great patriot hostage. We will pay nothing for the release of an innocent man, but we are cutting back on Turkey!

On August 1, the U.S. froze the assets of two top Turkish government officials. A week later, President Trump announced that tariffs would double on aluminum and steel imported from Turkey to the U.S.

Next Court Hearing Set for October 12

As the cost of living has increased for Turkish citizens, some have questioned the increasing sanctions imposed by the Trump administration.

“With the Turkish economy in decline due to [the] purges and overall mismanagement, American sanctions only reinforce Erdogan’s rhetoric,” reported Christianity Today on Thursday, citing several sources.

“The treatment of Pastor Brunson is a symptom of Turkey’s hyper-nationalist anti-Western culture, driven by conspiracy theories.” – Joel Richardson

Chris Seiple of the Institute for Global Engagement disparaged the Trump administration for barely mentioning the 20 other Americans imprisoned in Turkey. “The singular focus on Brunson allows the Turkish press, among others, to promote the narrative that America only cares about American Christians, and not all its own citizens,” stated Seiple. The Washington Post confirmed Wednesday, however, that State Department officials are working to free all Americans detained over the past two years. Alternately a critic and backer of the Trump administration, Joel Richardson urges Americans to view current issues in context.

“The noose had been tightening for Christians in Turkey long before Trump came into power,” says the author, who produces periodic video updates on Mideast issues. “Numerous Christian pastors and workers were driven out of the country during the Obama administration. To lay all blame on President Trump and the sanctions frankly is ignorant.”

On Friday, a high court in Izmir, Turkey upheld the lower court ruling that keeps Brunson under house arrest and banned from travel. His next court hearing will be on October 12. He and his family have been represented legally by the American Center for Law and Justice (ACLJ).

Over the past year, ACLJ has gathered over 590,000 signatures calling for the release of Pastor Brunson. They plan to deliver it to the next UN General Assembly meeting which begins on September 18.

Watch a video below from Pastor Brunson’s daughter, and learn more about the ACLJ petition.