New Book: America is on the Brink of Disaster

Longtime San Diego pastor and Trump faith advisor Jim Garlow teams up with co-author David Barton for an in-depth book on six steps to save the nation. 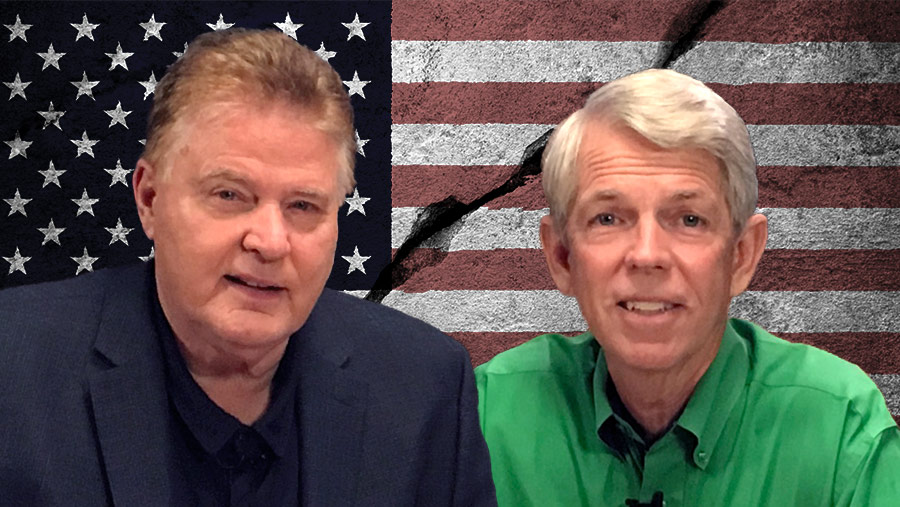 In their new book This Precarious Moment, Jim Garlow (left) and David Barton outline six steps Americans must take to reclaim our future.

In advance of contentious elections, two longtime evangelical leaders are eager to point Christians back to the Bible as their source. Neither one is without their critics.

Jim Garlow, called an “activist preacher” by his hometown paper, recently announced he is stepping away from the role of senior pastor after 23 years leading Skyline Church in San Diego, Cali. Prior to Garlow, author John Maxwell pastored the megachurch. As a new senior pastor begins his tenure, Garlow will oversee Skyline’s ministries to leaders in Washington, D.C., New York City and Jerusalem.

He rejects the “activist” label, noting his concern is about preaching the full Gospel — including with his latest book. “This book is not about affirming any party,” says Garlow. “I’ve confronted Republicans when they’re out of sync with biblical values as strongly as I’ve ever confronted a Democrat. I can name you actual Senators! What’s breaking the heart of God and what breaks our hearts is to make sure we bring the truth.”

Garlow wrote This Precarious Moment (Salem Books, 304 pages) with David Barton. A collector of over 120,000 historical documents and artifacts compiled at WallBuilders near Fort Worth, Tex., Barton is also no stranger to controversy. His book The Jefferson Lies, revised in 2016, has generated debate among historians.

The two leaders spoke in a phone interview about the silent evangelical church, the collapse of truth and how to improve dialogue across the political aisle.

When did you decide to co-author this book? Jim Garlow: In late 2016, after the contentious election, I felt the Holy Spirit really pressing on my spirit. He said the church of Jesus Christ across America had a very short window of time to resolve four issues.

These included racial healing, immigration from a distinctly biblical standpoint, a revival of thinking among millennials and the reestablishment of a proper relationship with Israel. Now, the fourth has been resolved to a large measure by the current administration, but the other three have not.

As David Barton and I began to talk, we added two more. Those are reestablishing an understanding of the Judeo-Christian foundation of the country, and activating the church to be the church.

The book begins by tackling several controversial issues, such as immigration policy. Why lead with these?

David Barton: We’ve always believed that, number one, the Bible is relevant. Number two, history has examples and answers for what’s out there. When you bring those two elements together, you find there is nothing new under the sun as Solomon said. Technology changes, but issues don’t.

Many of the immigration debates we are having today, they had in 1787 at the Constitutional Convention. We think because they rode horses, they don’t know what we’re dealing with. That’s crazy. Human nature does not change. It’s the same with the relationship with Israel. Way back at the time of President John Adams, he was calling for the reestablishment of Israel as an independent nation. He was a Zionist two hundred years ago!

For all of these pressing issues, there are clear solutions from history, Scripture and the Constitution. These really are divisive issues that need to be solved.

How can we see the humanity and dignity of every person, even those with whom we disagree on politics?

Garlow: As a pastor, I was one of those who advocated for Prop 8 in my home state of California. The 2008 ballot initiative defined marriage as between a man and a woman. (Editor’s note: the 2015 Supreme Court ruling in Obergefell v. Hodges voided Prop 8 and legalized same-sex marriage nationwide.)

When I saw how the decibel level started increasing, I actually invited to a Sunday night seminar two men who do not accept my views on sexuality. They were Eugene Robison, an Episcopalian Bishop from New Hampshire, and John Corvino who coauthored the book, Debating Same Sex Marriage. I also invited Robert Gagnon, an expert on what the Scriptures say about homosexuality, and a brilliant Catholic scholar, Jennifer Roback Morse.

“The volume has gotten worse. The language has gotten more vitriolic. But we have tried to model civility in every way that we possibly can.” – Jim Garlow

It was a packed-out house that night. Half the crowd was not from my church and not supportive of our values. I announced at the start: Our church has not changed its values. We’re fiercely committed to biblical values on this issue. Marriage is one man and one woman, period. However, I’m attempting to model how a conversation is supposed to be.

What if we stopped screaming words at each other, “homophobe” or “intolerant” or whatever, and had a conversation? Christians can do that and not sacrifice valuing what the Bible actually says on this issue. We talked for the next two and a half hours, which is available online.

We modeled how discourse is supposed to take place among people who radically disagree with each other. I wish I could say that was a turning point in the conversation about homosexuality or homosexual marriage. It was not.

The volume has gotten worse. The language has gotten more vitriolic, particularly aimed at people who hold my values. But it can be done and should be done. We have tried to model civility in every way that we possibly can in our highly polemicized culture.

Why is the value of objective truth collapsing in our society? Barton: We no longer teach people to think, we teach them to learn. As learners, they receive the knowledge, ingest it and act on it. As thinkers, they would look at all sides, look at metrics and stats and see which one had proven to work.

A great example is 75 percent of college students right now say they support socialism. In following up on the polling, we asked: OK, can you define socialism? We could not get a single definition of the term. But they have been taught that this is the best system that provides the most fairness and prosperity. In 5,500 years of recorded history, can you point to any socialistic nation where prosperity and freedom has increased? They couldn’t.

So there are no metrics, but they are very intolerant of people who challenge their views on socialism. Educationally, what we do now is we say: Here is what you need to believe. And anyone who challenges that, you need to attack them. Right now, 53 percent of college students support restrictions on free speech. 19 percent think that violence is a proper reaction to free speech you disagree with. Those are startling numbers.

Today, we are in a polarized society. We use labels and instantly reject people because of the labels they’ve been assigned, whether they have actually earned those labels or not. The polarization is something that education has greatly contributed to, but it’s because we no longer seek truth.

We no longer want objective truth, rather we have a philosophy that we want to defend. That makes dialogue hard, but dialogue can be done as Jim has done in his church. Committing to civility and truth means, I’m not scared of your ideas, and you’re not scared of mine. Then we can have a discussion, and that makes all the difference.

Clear Vision from the Good Book

Today, Fox News and talk radio seem to guide how many evangelicals engage in politics. What approach are you recommending in This Precarious Moment?

Barton: In America right now, Christians have lost their voice in a biblical sense. We have biblical illiteracy at the highest-ever recorded levels.

Only four percent of millennials hold a biblical worldview. With all ages, it averages out to 10 percent. When you know so little about the Scriptures, you can be easily led — whether by Fox News or other political commentators. You tend to create god in your own image. People take what they believe and say, That must be biblical because I’m a Christian. It’s not.

“When you know so little about the Scriptures, you can be easily led — whether by Fox News or other political commentators. You tend to create god in your own image.” – David Barton

It’s easy to have Christian groups represent exactly the opposite and yet say they’re Christian. I hardly even use the term “Christian” anymore because it could mean anything to anybody. But “biblical” is something different. The Bible is written in black and white, which is plain to see.

Christians have to step up and know their own book again. If they do and start thinking according to that book, they’re not going to be easily led by any media, activist, group or anything else. That’s what we’re missing today.

Garlow: I encourage people to watch Fox News and MSNBC and CNN and other outlets to be aware of what’s being said. But view it within the framework of Scripture, as David just said.

He referenced we can’t hardly use the word “Christian” anymore. We can’t use the word “evangelical” either! In the book, we use the acronym “ABC” — meaning authentically biblical Christians, churches and colleges.

The heart of both of us is upholding a high view of Scripture. God is so good. In Isaiah, the government is on his shoulders and all authority comes from him. If we can get the word of God to people, what a difference it can make in our nation. That’s what we’re attempting to do.

Newly released by Jim Garlow and David Barton, This Precarious Moment is available online and wherever books are sold. Sign up to receive The Stream’s top stories every week via email.