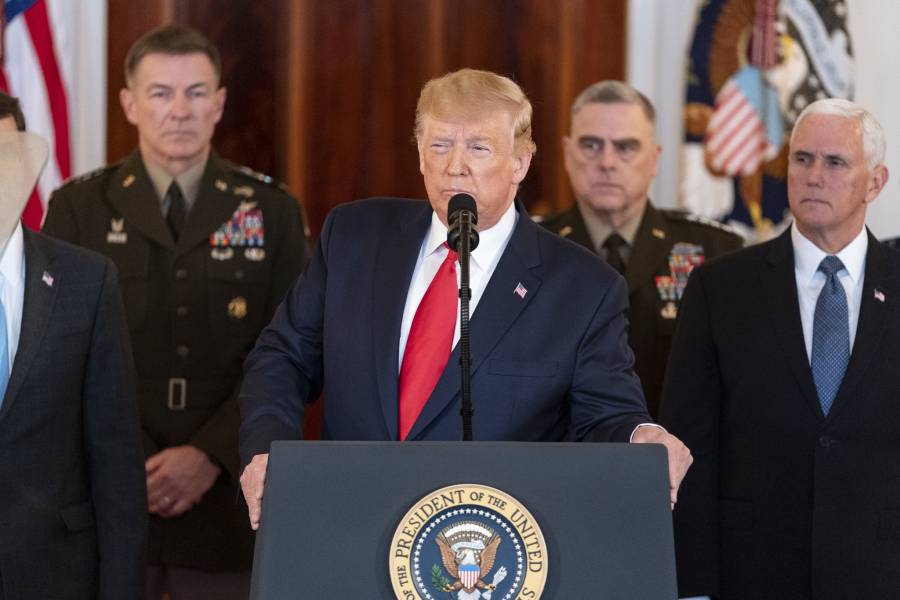 Backed by his top brass and flanked by Secretary of Defense Mark Esper, Secretary of State Mike Pompeo and Vice President Pence, Donald Trump had two messages for Iran: “Here’s an off-ramp” and “You’d better take it.”

Before even saying “good morning,” President Trump opened his national address Wednesday morning with a big stick. “As long as I am president of the United States,” he declared, “Iran will never be allowed to have a nuclear weapon.” He closed the speech with an olive branch: “The United States is ready to embrace peace for all who seek it.”

In between, the President offered a measured, serious, yet hopeful response to Iran’s missile attack Tuesday night.

President Trump did not dwell on last night’s missile barrage, saying the American people should be “extremely grateful and happy. … All our soldiers are safe and only minimal damage was sustained at our military bases.”

He credited the lack of casualties on “precautions taken, the dispersal of forces and an early warning system that worked very well.” Tellingly, he did not condemn Iran for the attack or vow retaliation. His tone was far from belligerent. He seems to be operating on the premise Iran wasn’t really trying to kill Americans, but just trying to save face. And Trump let them, rather than rub their faces in the “failure” of their missiles to take out Americans or our facilities.

The President then broadened out to the big picture: how nations have “tolerated Iran’s destructive and destabilizing behavior in the Middle East and beyond” for 40 years. “Those days are over,” said the President.

He talked about last week’s killing of Gen. Qasem Soleimani, running down his vast history of carnage. Soleimani was planning new attacks against Americans, “and we stopped him.” Added Trump, “Soleimani’s hands were drenched in both American and Iranian blood. He should have been terminated long ago.”

Congress was being briefed today on just what Soleimani was up to in Baghdad.

Although there won’t be any military response to last night’s ineffectual barrage, President Trump announced more sanctions will be placed on the Iranian regime. “They will remain until Iran changes its behavior.”

However, Trump also strongly signaled his desire to back away from heavy lifting in the region. Thanks to administration policy, he said, “we are (now) independent, and we do not need Middle East oil.” We have more “options.” In other words, the Middle East is less our problem.

So, he is calling on NATO to get more involved in the region. NATO countries depend on oil coming out of the Middle East, and, of course, they’re much closer to the action.

The Dealmaker talked deals. He recounted how Iran’s belligerence increased in the wake of the “very defective” Iran nuclear deal or JCPOA. In fact, reminded Trump, Iran was shouting “Death to America” the day the deal was signed. “Then Iran went on a terror spree funded by the money from the deal, and created hell in Yemen, Syria, Lebanon, Afghanistan and Iraq. The missiles fired last night at us and our allies were paid for with the funds made available by the last administration.”

He urged other nations to recognize the danger Iran poses and “work together (with the United States) to make a deal with Iran that makes the world a safer and more peaceful place.”

But Iran must change its terrorist tune:

Peace and stability cannot prevail in the Middle East as long as Iran continues to foment violence, unrest, hatred and war. The civilized world must send a clear and unified message to the Iranian regime: Your campaign of terror, murder, mayhem will not be tolerated any longer. It will not be allowed to go forward.

Still, Trump closed with an open hand to the people and leaders of Iran: We want you to have a future and a great future, one that you deserve, one of prosperity at home in harmony with the nations of the world. The United States is ready to embrace peace with all who seek it.”

“Blessed are the peacemakers, for they will be called children of God.” (Matthew 5:9)

Here’s a full transcript of the President’s Speech:

My Review of Bob Woodward’s Fear