Trump has Condemned Post-Election Violence. Why are Dem Leaders Encouraging It? 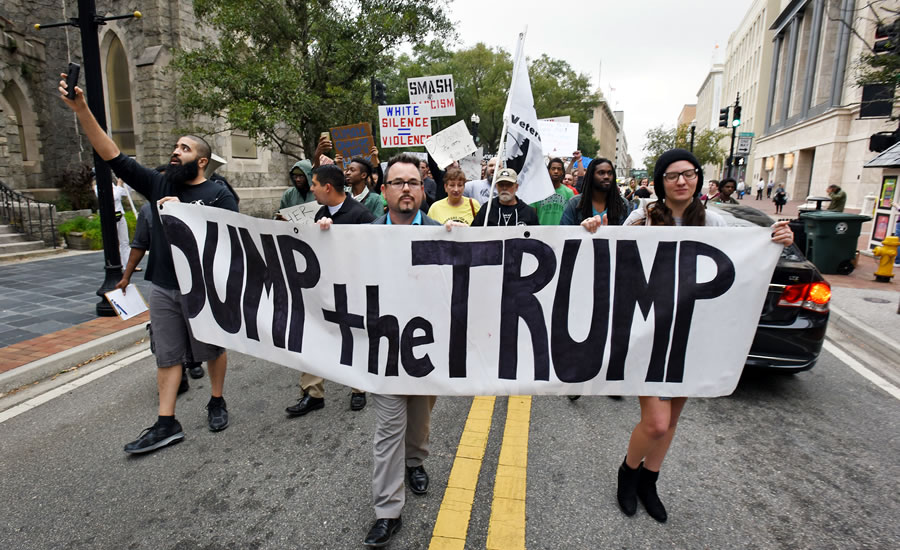 Anti-Trump protesters start their hike from Hemming Park to their announced destination at the offices of The Florida Times-Union newspaper, Saturday, Nov. 12, 2016, in Jacksonville, Fla.

Last week, President-elect Donald Trump condemned violence allegedly done by racists and others against minorities after he won the White House. Though frequently unsubstantiated and/or proven false, the narrative of a virulently racist and bigoted America post-election has been furthered by the anti-Christian, anti-conservative Southern Poverty Law Center (SPLC), which published a largely unverified report claiming 700 incidents of hate, hate-based harassment etc. were reported to it since Trump was elected.

Meanwhile, proven cases of violence by liberal Trump opponents have been witnessed in protests around the nation. Traffic has been blocked, police and civilians have been attacked and arrests have been made. Additionally, Trump backers have been specifically targeted in a handful of beatings and other proven situations nationwide.

Again, Trump has made efforts to tamp down the flames, though CNN’s Brian Stelter and others say he should do more. Contrast this to Democratic leaders, who have been urged by Trump’s campaign manager to speak out against the violence.

Rather than condemn violence around the nation, Reid said late this week that he “was concerned” after the election whether  “the world is going to be destroyed.” Last week, Reid called Trump “a sexual predator” who “fueled his campaign with bigotry and hate.” Reid also said:

I have heard more stories in the past 48 hours of Americans living in fear of their own government and their fellow Americans than I can remember hearing in five decades in politics. Hispanic Americans who fear their families will be torn apart, African Americans being heckled on the street, Muslim Americans afraid to wear a headscarf, gay and lesbian couples having slurs hurled at them and feeling afraid to walk down the street holding hands. American children waking up in the middle of the night crying, terrified that Trump will take their parents away. Young girls unable to understand why a man who brags about sexually assaulting women has been elected president.

Warren, long considered a liberal favorite for the White House if she were to run, told MSNBC’s Rachel Maddow last week that while liberals must “listen” to people who voted for Trump, those people protesting Trump “have a right to have their voices heard.”

Warren is right. But where is her condemnation of the violence by the left? This is the same woman who called Tea Party activists “anarchists” after 17 percent of the U.S. federal government shut down in 2013, and who said Republicans were holding the government “hostage.”

President Barack Obama was asked about the domestic protests on his last international trip as the White House occupant. He declined to condemn the violence and, perhaps just as offensively, compared the often-violent protests to peaceful ones by conservative groups during his presidency.

“I would not advise people who feel strongly or are concerned about some of the issues that have been raised over the course of the campaign, I would not advise them to be silent,” Obama said during a joint news conference with German Chancellor Angela Merkel.

Obama said protests are just something Trump would have to get used to as the leader of the free world.

“I’ve been the subject of protests during the course of my eight years,” he said. “And I suspect that there’s not a president in our history that hasn’t been subject to these protests.”

As a former Tea Party Patriots employee, I remember the days of protests against Obama. They were usually forward-looking affairs, urging policy changes and demanding things like less government spending and fair treatment of all citizens by the IRS. Participants would also clean up after themselves, rather than leave the site covered in trash and the streets littered with broken glass. Even the most raucous Tea Party events were town hall meetings with senators and representatives, where yelling was the worst thing that happened.

Non-Tea Party protests were likewise peaceful. The March for Life is D.C.’s largest annual protest, and like prayer vigils frequently held for America’s future, it is peaceful.

Hillary Clinton’s first speech since conceding the White House race to Trump was largely benign in terms of addressing the violence in the nation by liberals who preferred her over Trump. Unlike Reid, she didn’t fan the flames of irrational fear. Unlike Obama and Warren, she didn’t encourage the protests while ignoring the strong core of lawbreaking in them.

But nor did she call for peace. Nor did she reiterate a call for her supporters to accept the results of the election.

After a normal election, it might be reasonable for CNN’s Stelter and others to demand Trump ask for peace. After all, he is the next President, and his leadership ought to be important. But this was not a normal election. Furthermore, while rational concerns have been expressed by some protesters, overreactions by liberal leaders has made it almost impossible for Trump to stem the protests and the violence.

Trump’s concession speech was amazing and magnanimous, and both Obama and Clinton made solid speeches as well immediately after Trump’s victory. But it is Obama, Warren and Clinton to whom protesters will listen, not the President-elect the liberals trashing our streets and ambushing their fellow Americans believe is the next Hitler.

Then again, wasn’t Bush supposed to be the next Hitler?