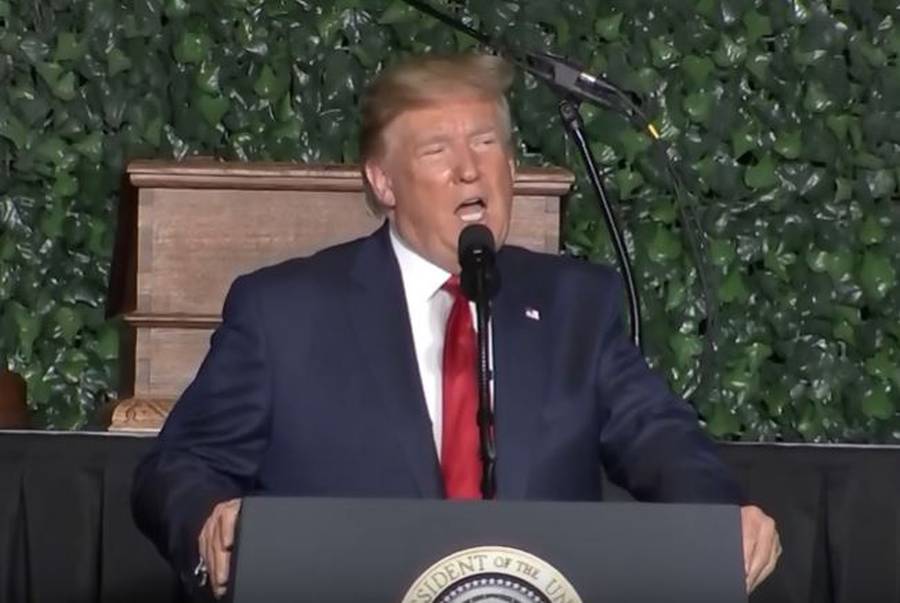 President Trump at the commemoration in Jamestown of the 400th anniversary of the first representative legislative assembly in the Western Hemisphere, July 30, 1619.

President Trump was on hand for the commemoration of this “momentous occasion.” He offered congratulations to Virginia for “four incredible centuries of history, heritage and commitment to the righteous cause of American self-government.”

“Self-government in Virginia did not just give us a state we love,” he said, “in a very true sense it gave us the country we love, the United States of America.”

“Together, the (Jamestown) settlers forged what would become the timeless traits of the American Character.”

The 400th Anniversary of Slavery in Virginia

Trump also noted August marks the 400th anniversary of the first enslaved Africans arriving in Virginia. It was “the beginning of a barbaric trade in human lives,” said Trump. “We remember every sacred soul who suffered the horrors of slavery and the anguish of bondage.”

“In the face of grave oppression and grave injustice African Americans have built, strengthened, inspired, uplifted, protected, defended and sustained our nation from its earliest days.”

Many black Democratic lawmakers boycotted Trump’s appearance. (Apparently they were fine with KKK hood/black face-wearing Gov. Ralph Northam being on hand.) Trump shrugged off the boycott, tweeting that Virginia democrats wanted to make the event “as uncomfortable as possible, but that’s okay today is not about them.”

They Can’t Help But Disrupt

Still, the historic occasion was marred by a Virginia legislator who decided to make the event about Trump. During the speech, Del. Ibraheem Samirah jumped up, and stood near the front of the stage shouting, “Mr. President, you can’t send us back. Virginia is our home.” He also held up signs reading “deport hate” and “reunite my family” and “go back to your corrupted home.”

Trump did not respond and the protester was gently escorted away.

Said Trump, “In our own time, we must vigorously defend those cherished democratic traditions that have made our beloved Republic the envy of the world.”

On Eve of Impeachment Trial, Trump Finally Gets His Defense

Donald Trump is Literally Worse Than the Bubonic Plague!