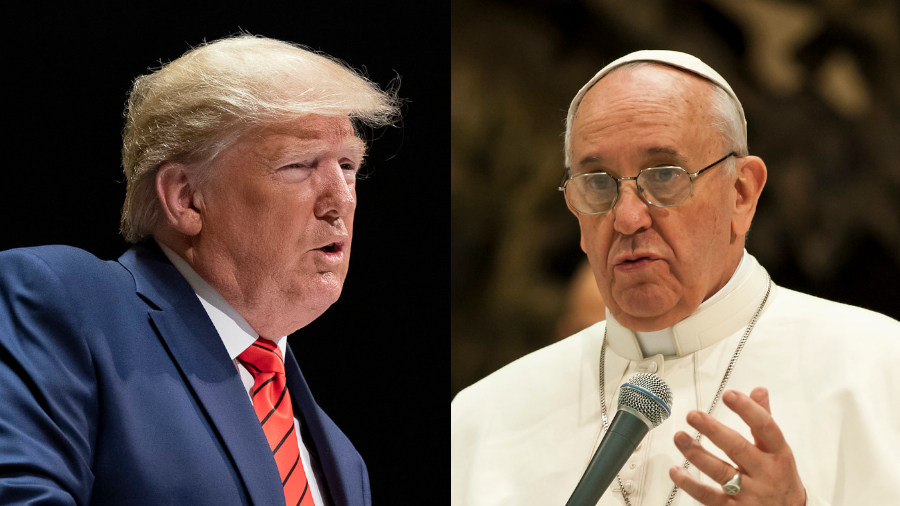 President Trump’s speech Tuesday at the United Nations was powerful. Not just for its high intellectual quality. Or the firmness with which he delivered it. Gone was the credit-taking. The score-settling. And all the other occasional flourishes which offend certain observers. (For me, they just mark out Trump as a fellow native of Queens, N.Y.)

This time Trump stuck to the text he’d approved. He spoke of high principles in the tone of a seasoned leader. And the vision he laid ought to inspire us. He grounded it in the broad, deep Western tradition of patriotism, prudence, and Christian concern for human dignity. Trump spoke wisely and solemnly of the threats to all those virtues. And of attacks on the freedom that makes them even possible. He singled out threats to innocent human life in the womb, and to basic religious liberty.

I will lay out the key passages of Trump’s remarks. Then I will contrast them with what Pope Francis has said on similar topics. The divide is stark and important. The views of the leader of the world’s most powerful government on the one hand, and those of the earth’s largest church on the other. They’re very different. And on each issue, I must sadly conclude that Trump is mostly right, and Francis mostly wrong.

On that first issue, globalism vs. patriotism, Trump said:

We believe that when nations respect the rights of their neighbors, and defend the interests of their people, they can better work together to secure the blessings of safety, prosperity, and peace.

Each of us here today is the emissary of a distinct culture, a rich history, and a people bound together by ties of memory, tradition, and the values that make our homelands like nowhere else on Earth.

That is why America will always choose independence and cooperation over global governance, control, and domination.

I honor the right of every nation in this room to pursue its own customs, beliefs, and traditions. The United States will not tell you how to live or work or worship.

We only ask that you honor our sovereignty in return.

As my administration has demonstrated, America will always act in our national interest.

I spoke before this body last year and warned that the U.N. Human Rights Council had become a grave embarrassment to this institution, shielding egregious human rights abusers while bashing America and its many friends.

Our Ambassador to the United Nations, Nikki Haley, laid out a clear agenda for reform, but despite reported and repeated warnings, no action at all was taken.

So the United States took the only responsible course: We withdrew from the Human Rights Council, and we will not return until real reform is enacted.

For similar reasons, the United States will provide no support in recognition to the International Criminal Court. As far as America is concerned, the ICC has no jurisdiction, no legitimacy, and no authority. The ICC claims near-universal jurisdiction over the citizens of every country, violating all principles of justice, fairness, and due process. We will never surrender America’s sovereignty to an unelected, unaccountable, global bureaucracy.

On energy policy and climate, Trump was equally clear.

Around the world, responsible nations must defend against threats to sovereignty not just from global governance, but also from other, new forms of coercion and domination.

In America, we believe strongly in energy security for ourselves and for our allies. We have become the largest energy producer anywhere on the face of the Earth.

Speaking on September 1, Pope Francis had a very different message.

[O]ur daily decisions about food, consumption, transportation, use of water, energy and many other material goods, can often be thoughtless and harmful. Too many of us act like tyrants with regard to creation. Let us make an effort to change and to adopt more simple and respectful lifestyles! Now is the time to abandon our dependence on fossil fuels and move, quickly and decisively, towards forms of clean energy and a sustainable and circular economy. Let us also learn to listen to indigenous peoples, whose age-old wisdom can teach us how to live in a better relationship with the environment.

On immigration, the divide between Trump and Francis could not be clearer. Trump addressed the dangers of uncontrolled immigration.

The United States is also working with partners in Latin America to confront threats to sovereignty from uncontrolled migration. Tolerance for human struggling and human smuggling and trafficking is not humane. It’s a horrible thing that’s going on, at levels that nobody has ever seen before. It’s very, very cruel.

Illegal immigration funds criminal networks, ruthless gangs, and the flow of deadly drugs. Illegal immigration exploits vulnerable populations, hurts hardworking citizens, and has produced a vicious cycle of crime, violence, and poverty. Only by upholding national borders, destroying criminal gangs, can we break this cycle and establish a real foundation for prosperity.

We recognize the right of every nation in this room to set its own immigration policy in accordance with its national interests, just as we ask other countries to respect our own right to do the same — which we are doing. That is one reason the United States will not participate in the new Global Compact on Migration. Migration should not be governed by an international body unaccountable to our own citizens.

Ultimately, the only long-term solution to the migration crisis is to help people build more hopeful futures in their home countries. Make their countries great again.

Back in March, Francis spoke to a group of migrants. Millions of Muslim migrants from Africa have posed a grave challenge to economically stagnant European states with generous welfare states. (Likewise, millions of mostly Latino, low-skill migrants to the United States.)

[W]elcoming means, above all, offering broader options for migrants and refugees to enter destination countries safely and legally. Indeed, expanding regular migration channels is one of the main objectives of the Global Compact. This shared commitment is needed in order to avoid presenting new opportunities to those “merchants of human flesh” who exploit the dreams and needs of migrants. Until this commitment is fully implemented, the emergency of irregular migration has to be met with justice, solidarity and mercy. Forms of collective expulsion, which do not allow for the suitable treatment of individual cases, are unacceptable. On the other hand, special legalization strategies, especially in the case of families and minors, should be encouraged and simplified.

[N]o human being is worthy of being discarded, but rather should be seen as a potential source of personal, cultural and professional enrichment in whatever place they find themselves. Host communities will be enriched if they learn how best to appreciate and utilize the contribution made by migrants, while working to forestall all forms of discrimination and xenophobia.

The Free Market or China?

On economics, the clash is equally obvious. Trump warned against the dangers of collectivist economics.

Not long ago, Venezuela was one of the richest countries on Earth. Today, socialism has bankrupted the oil-rich nation and driven its people into abject poverty.

Virtually everywhere socialism or communism has been tried, it has produced suffering, corruption, and decay. Socialism’s thirst for power leads to expansion, incursion, and oppression. All nations of the world should resist socialism and the misery that it brings to everyone.

Pope Francis rarely speaks of any of the dangers of collectivism. Instead, he warns regularly of the dangers of an “unregulated” capitalism which exists nowhere on earth. Back in May, he lectured mining executives on the subject.

The precarious condition of our common home has been the result largely of a fallacious economic model that has been followed for too long. It is a voracious model, profit-oriented, shortsighted, and based on the misconception of unlimited economic growth. Although we frequently see its disastrous impacts on the natural world and in the lives of people, we are still resistant to change. “Economic powers continue to justify the current global system where priority tends to be given to […] the pursuit of financial gain, which fail to take the context into account, let alone the effects on human dignity and the natural environment” (ibid., 56).

We are aware that “by itself the market cannot guarantee integral human development and social inclusion” (ibid., 109) and that “environmental protection cannot be assured solely on the basis of financial calculations of costs and benefits” (ibid., 190). We need a paradigm shift in all our economic activities… .

While Pope Francis has never endorsed Marxism or socialism directly, one comment is telling. A key appointee of his, Bishop Marcelo Sanchez Sorondo, is the leading authority on economics and other social sciences at the Vatican. (He’s second only to Pope Francis.) As The Stream reported, in 2018, returning from Communist China, Sorondo praised that regime and its system:

“Those who best realize the social doctrine of the Church at this time are the Chinese.” So Sorondo gushed to the Italian newspaper, La Stampa, on Friday. “They seek the common good, subordinating all things to the general good.”

If Pope Francis rejected that assessment, he has never said so.