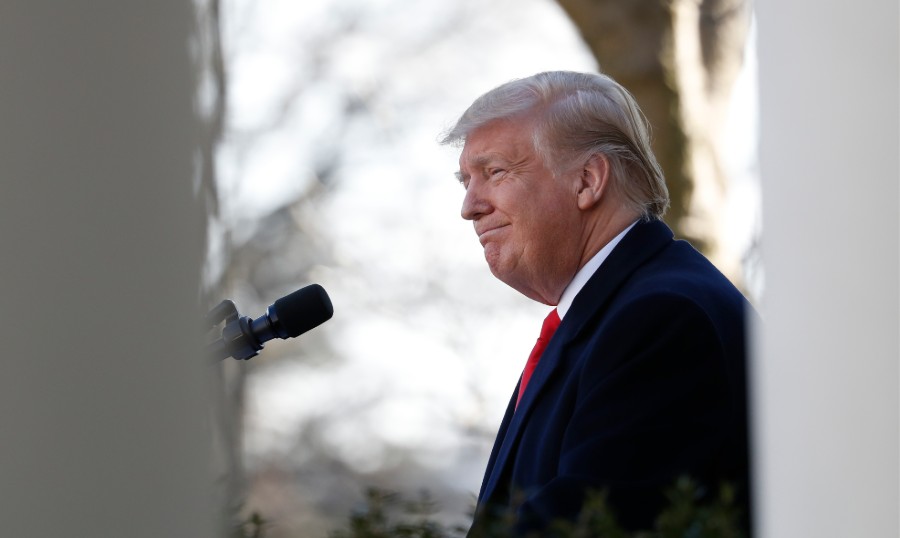 President Donald Trump speaks in the Rose Garden of the White House, Friday, Jan 25, 2019, in Washington.

President Donald Trump announced Friday afternoon that he has agreed to a deal that will fund the government for three weeks while negotiations continue on building the southern border wall.

Trump made the announcement during a speech in the Rose Garden at the White House. He implied that taking care of federal employees was his primary motivation.

“In a short while, I will sign a bill to open our government for three weeks until February 15th,” Trump said. “I will make sure that all employees receive their back pay very quickly, or as soon as possible. It’ll happen fast.”

The legislation set to be passed by Congress will include back pay for some federal workers. 800,000 have gone without their salaries during the shutdown.

Even as Trump agreed to the short-term deal, he isn’t giving up on a U.S.-Mexico border wall. Trump emphasized the need for a border wall. He hopes that Congress will be able to come to an agreement over the next three weeks.

“After 36 days of spirited debate and dialogue, I have seen and heard from enough Democrats and Republicans that they are willing to put partisanship aside — I think — and put the security of the American people first. I do believe they’re going to do that,” Trump said. “They have said they are for complete border security, and they have finally and fully acknowledged that having barriers, fencing, or walls — or whatever you want to call it — will be an important part of the solution.”

He continued a “bipartisan” group for the House and Senate will review the requests of Homeland Security and law enforcement professionals. “Based on operational guidance from the experts in the field, they will put together a Homeland Security package for me to shortly sign into law. Over the next 21 days, I expect that both Democrats and Republicans will operate in good faith. This is an opportunity for all parties to work together for the benefit of our whole beautiful, wonderful nation.”

Senate Majority Leader Mitch McConnell says he hopes there will be “good-faith negotiations” to settle differences on border security. McConnell says he knows “the pain that this episode has caused” across the country. The Kentucky Republican says federal workers who have gone without pay “deserve this resolution.”

Senate Democratic leader Chuck Schumer says Democrats oppose the billions of dollars Trump wants to build the wall. They agree on other ways to secure the border. That “bodes well for coming to an eventual agreement.”

Trump still wanted to be “very clear” that his intention is to secure the nation’s southern border with a physical barrier. He said, “We really have no choice but to build a powerful wall or steel barrier. If we don’t get a fair deal from Congress, the government will either shut down on February 15th, again, or I will use the powers afforded to me under the laws and the Constitution of the United States to address this emergency.”

Declaring a national emergency would allow Trump to bypass Congress and use existing money to start building the wall.

Trump says the border barrier he wants built isn’t “medieval.’ It shouldn’t be “controversial,” because it will keep drugs and criminals from crossing into the United States.

Pelosi said she had agreed to talk to Trump about a “mutually agreeable date” once the government is open. She said she would “look forward to doing that and welcoming the president to the House of Representatives.”

The Associated Press contributed to this report.

Congress, Do Your Job!