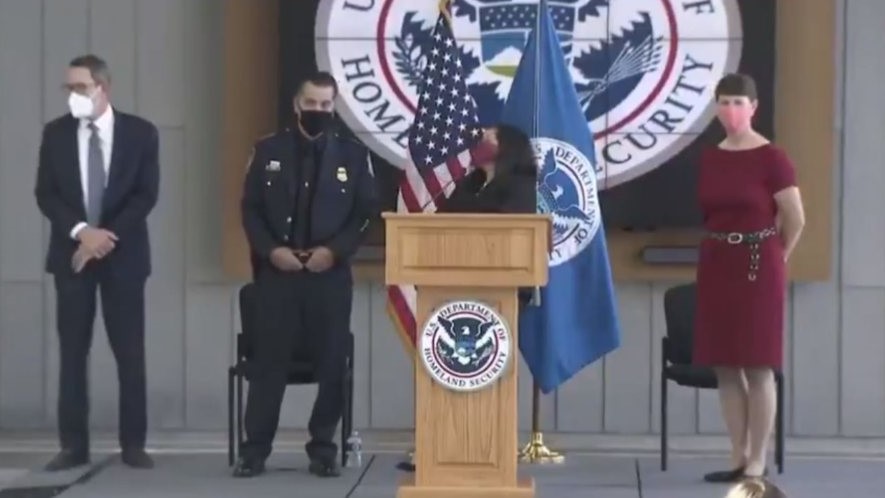 The Department of Homeland Security (DHS) announced Tuesday the opening of the new Center for Countering Human Trafficking. It is the government’s first “integrated law enforcement operations center directly supporting federal criminal investigations, victim assistance efforts, intelligence analysis, and outreach and training activities related to human trafficking and forced labor,” according to the DHS website. The Washington-based center is led by U.S. Immigration and Customs Enforcement (ICE). Following the announcement, reporters present were asked for questions. No one had anything to ask.

This is why no one knows about Trump’s efforts to combat human trafficking, tweeted a user named Matriarch. “Today Trump Admin announced the first Govt. Center For Countering Human Trafficking in the U.S. They asked if the press had any questions. This is what happened… *crickets*.”

Wonder why the you never hear about @realDonaldTrump administration’s work to combat human trafficking?

Today Trump Admin announced the first Govt. Center For Countering Human Trafficking in the US. They asked if the press had any questions.

This is what happened… *crickets* pic.twitter.com/lio4BwWoKi

According to the DHS, “The center will be staffed with law enforcement officials from Homeland Security Investigations (HSI) and across DHS, as well as subject matter experts and support staff from 16 DHS components — all focused on the ‘4 Ps’ of the center’s mission: prevention, protection, prosecution and partnerships.”

Acting Secretary of DHS Chad Wolf compared human trafficking to modern day slavery. “There is no other way to say it. The words are strong because the actions are evil.”

The forms of exploitation, sex trafficking, forced labor, and domestic servitude that constitute human trafficking are antithetical in every way to the principles of human dignity that Americans hold dear. The launch of this Center for Countering Human Trafficking represents the investment of resources, attention, and time by President Trump to combat and dismantle all forms of human trafficking.

Editor’s Note: The Stream’s parent organization, LIFE Outreach International, is also involved in combating human trafficking through its RescueLIFE ministry. RescueLIFE goes into villages, reaching, educating and preventing children from becoming victims, rescuing those who have been victimized and restoring them by providing an environment where their hearts, minds and bodies can be restored to the beauty God designed for them. Please consider giving today to RescueLIFE to combat human trafficking worldwide.