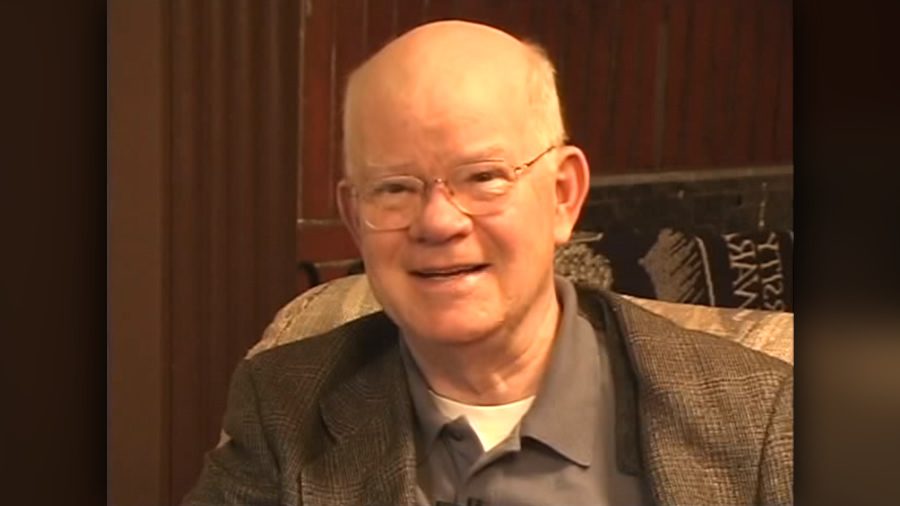 By Donald McLaughlin Published on November 5, 2019 •

This past weekend saw the passing of Dr. Phillip E. Johnson, best known for his seminal book Darwin On Trial and for being the godfather of the modern Intelligent Design movement (ID). Many who knew Johnson personally will no doubt offer their heartfelt tributes to the man they knew as both a friend and mentor. I only met Johnson a few times myself. We had some short and pleasant conversations, but I cannot claim to have known him well. Still, he had a profound impact on my life.

My career was greatly influenced through Johnson’s books and articles, and the lectures I was privileged to hear him give. I know I am not alone in that. Johnson’s profound intellect — expressed through his books, articles and lectures — will no doubt continue to inspire many for years to come.

So my tribute to Phillip Johnson isn’t based on a long, close personal friendship. Rather, I believe I represent a great many whose lives were profoundly influenced by his thinking and example, whether they actually met him or not. The best tribute we can offer to him now is to continue the work he began, and to follow his example of kindness, good humor, and thoughtfulness.

I first encountered Johnson at a worldview conference held at Cheyenne Mountain in Colorado Springs. The conference was sponsored by the Wilberforce Forum, an arm of Prison Fellowship Ministries led by the late Chuck Colson. I was on staff with Prison Fellowship at the time, so I was working at the conference. I was able, however, to attend Johnson’s presentation on what he called “The Wedge.” This was his analogy for truth, logic, and reason being like the narrow end of a wedge that could split apart the log of philosophical naturalism (a strong form of atheism) so pervasive in our culture, especially in science.

I remember how impressed I was with Johnson’s ability to present deep philosophical ideas in simple laymen’s terms. I noted how cordially he interacted with everyone who spoke with him afterwards. Later I came to find out that was typical of Johnson. We talked briefly. It was both inspiring and challenging.

Not long after, I was with Chuck Colson for some events in Michigan. I’d just finished reading the book he had co-authored with Nancy Pearcey, How Now Shall We Live? There, I told Chuck how fascinated I was with the chapter on intelligent design versus evolution. I asked him what further reading he’d recommend. Without hesitation he said, “You need to read Phillip Johnson’s Darwin on Trial. I grabbed a copy as soon as I could, and read through in a day. I was hooked. And that was the start of a journey I could never have anticipated.

My Journey Into Intelligent Design

I read heavily on intelligent design, including all of Johnson’s other books. I was profoundly impressed by the clarity of his thought as well as the quality of the arguments he was making. A friend of mine, a philosopher of science who knew Johnson well, re-connected me with Johnson. I had a wonderful email exchange with him. He told me that the ID project needed lay people like myself to be advocates for ID in the public square.

I had heard many public movement leaders say they wanted regular folks like me to engage, but they never really provided an opportunity. Not so with Johnson. I was neither a scientist nor a philosopher, yet Johnson graciously invited me to be part of a small ID discussion group he was leading at the time. He even sent an email to the group to personally introduce me. That was just his way.

Shortly after that, I saw Johnson again at another worldview conference — where I was able to join him for lunch, along with 5 or 6 others. He was one of the most affable, authentic and genteel men I’ve ever met. I was the only non-scientist, non-philosopher at the table, yet he still encouraged me to stay involved. He thanked me for the contributions I had already made. He also showed a genuine interest in me, asking about my life and family.

Through his writing and lectures, Johnson has had a profound influence on many. When he focused his great intellect on Darwinian evolution, he exposed the soft underbelly of the beast.

Through Johnson I met, and later became friends with, Bill Dembski, another leading light in the ID movement. Dembski invited me to write for his ID-related “Uncommon Descent” website (now headed by Denyse O’Leary). From there I ended up on staff at the ID-centered Discovery Institute where, among other things, I wrote articles for Evolution News.

I recall talking with Johnson on the phone and thanking him for the inspiration and influence he had been to me. In his usual, affable way, he congratulated me on being on the DI staff and wished me well. I never would have ended up where I did if not for his influence on my own thinking. And I don’t think I’m alone in that. Through his writing and lectures, Johnson has had a profound influence on many. When he focused his great intellect on Darwinian evolution, he exposed the soft underbelly of the beast. He changed the terms of the debate entirely by showing conclusively just how intertwined Darwinism had become with philosophical naturalism. That profound insight sparked an entire movement that has changed the landscape in science, evolutionary biology, cosmology, philosophy of science, science education, and a wide range of other fields.

The ID movement has become global. It’s still growing despite great opposition, as more and more academics realize the presence of naturalism running through so many disciplines.

So how can we, who’ve been so strongly affected by Johnson, pay him our best tribute? I think he’d say it would be by continuing the work he began — doing it as he did, with affability, gentleness and good humor. That’s what I intend to do. I hope that many laymen like myself — and scientists and other thinkers, too — will join in as well.