Transgender Bathrooms and America’s Transition From Sanity to Madness 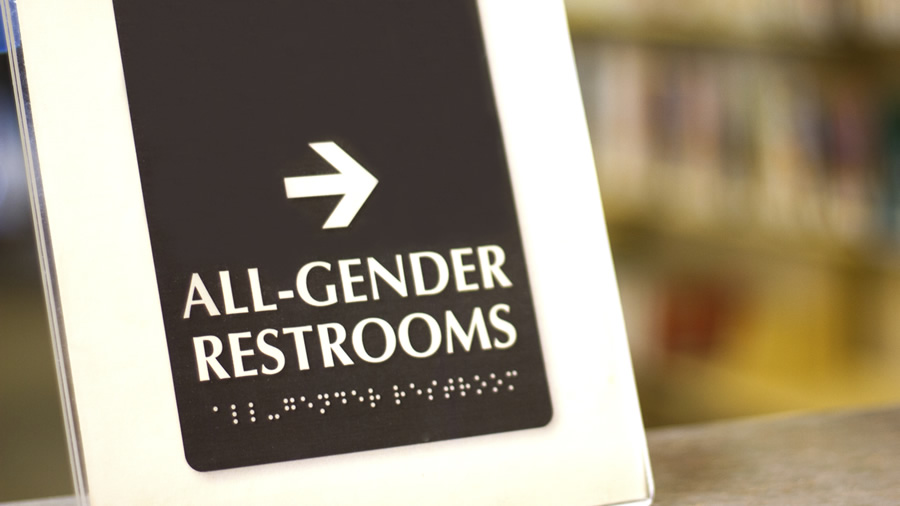 The year 2016 is going down in the books as the peak of the Reign of Madness, and not just because of the U.S. presidential election. When women even have to make the argument that biological males have no business being in the Ladies’ room, it’s safe to say raving irrationality has taken over.

And only the clueless believe this is just about bathrooms.

Have you heard that parents in Minnesota are suing to force an elementary school to begin teaching “transgender” ideology to Kindergartners?

Sorry, but this has nothing to do with bullying. Kindness, courtesy and compassion are the remedies for kids mistreating one another. Teaching children from an innocent age to become completely unmoored from physical reality is psychologically abusive. It’s teaching them to disregard a purpose of their bodies, and that absolutely everything in life hinges on their feelings.

The goal is to program our children into believing they are bad people if they object to sharing restroom and locker room facilities with the opposite sex. They must be raised to accept the new madness without resistance.

There is no anchor; nothing objectively real. Everything is in flux and entirely at the whim of one’s feelings. But feelings are fickle and susceptible to innumerable influences. What happens when feelings change again? Nothing will be permanent for them. All the ground is shifting sand. All of life becomes a messy canvas of splattered colors. No shapes, no lines, no borders, no discernible picture. It makes no sense.

Abstraction and incoherence may be appealing as art on the wall for a while, but it does not serve the human person well in real life.

It’s All About Feelings — Until It Isn’t

For many of today’s relativists, the only feelings that matter are those belonging to the folks who believe that feelings supersede reality. The feelings of the young person who is quite naturally, quite normally, quite healthily opposed to showering, undressing and using the restroom with someone of the opposite gender do not matter at all.

The natural modesty of such people, mostly girls, is to be dismissed and trampled upon. This is not accidental. It’s not a bug; it’s a feature of this new insane sexual revolution. It’s precisely the goal: to break down the natural modesty of children; to force them to ignore their own natural and healthy instincts toward privacy and decency regarding the opposite sex in situations that demand propriety; to cause them to view themselves and their own natural, God-given and healthy gut-feelings about being exposed to someone of the opposite gender as hateful, bigoted and mean.

The goal is to program our children into believing they are bad people if they object to sharing restroom and locker room facilities with the opposite sex. They must be raised to accept the new madness without resistance.

Astonishingly, parents now seem to think it’s their job to “let the kid decide” something as fundamental, organic and objective as whether the child is male or female. Now the innocent and foolish mind of a child is expected to discern things far beyond his power and make decisions of monumental importance based on whether he “feels” like a girl or a boy on any given day. A gentle boy who likes pink must be a girl. A girl who prefers playing football to playing with dolls must be a boy.

With this new State-imposed, required way of thinking, there is no longer freedom to disagree, even less to disapprove. By mandate of the State, girls and women are no longer worthy of, or in need of, privacy or safety from predatory men in public restrooms. But more than that, the new law of the land says that the human person is no longer male or female.

Think about that, really. The government is now telling us and telling our children that the objective physical reality of being male and female is no longer permitted to be considered truth, no longer allowed to guide our actions or thinking. Objectors will be punished.

Except, of course, if you are a person who suffers from gender dysphoria and then, maleness or femaleness based on feelings is ALL that matters. Gender is permitted to matter only to some, and only under select circumstances. Whatever one chooses to “identify” with is the new rule. A white woman can “identify” as a black woman. A white man can “identify” as a Hindu cyborg woman (?!?) and be given a faculty position at a woman’s university.

The Unicorn in the Room

They also deserve the truth. Loving them and showing them the respect every human person deserves does not, however, require that we go along with the pulp fiction that says the human person can “transition” between genders at will. A man cannot become a woman, and a woman cannot become a man. Love has to begin with the truth, or all you’ve got is squishy, meaningless sentiment.

I realize there are plenty of physicians who will indulge those with gender and body dysphoria and “treat” them with mutilating surgery and steroidal hormones — even doing so to still-growing children — and play along with the crazy idea that a man can transform himself into a woman or vice versa, but it does not follow that the rest of society must be forced to go along as well.

It certainly does not follow that our children must be forced to accept this madness as normal, nor that all public spaces must abandon propriety and obliterate the privacy rights of all others in order to placate the very, very few who have unfortunately chosen to live this madness.

People with eyes to see it also know that by setting their sights on the children, those imposing the new Madness Mandate hope to increase their numbers and grow their support as the years pass. In 10 or 20 years (if that long) the number of “transgender”, “trans-racial”, “trans-age”, or heck, even “trans-species” Americans could increase significantly. Political correctness may say that’s peachy, but is it love? No way. Love requires saying that’s nothing short of sinister.