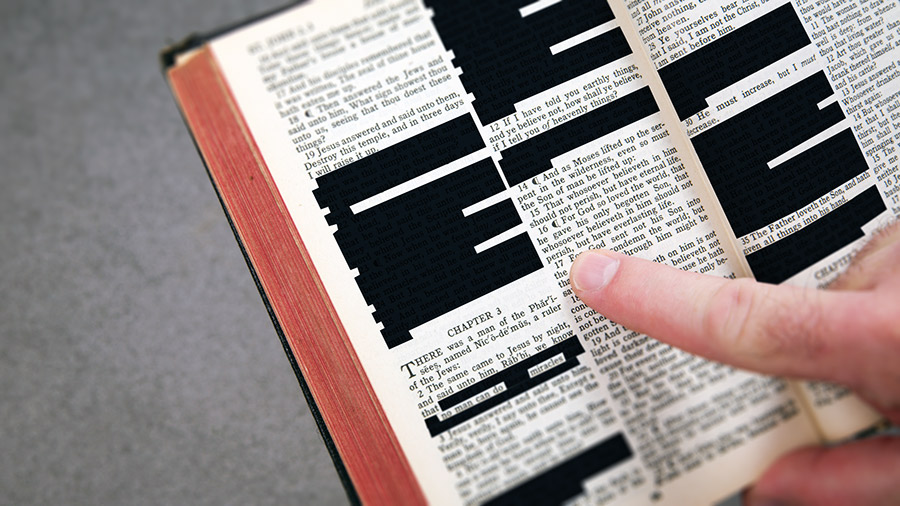 The Word of God liberates us. It offers us a lifeline out of this thicket of futile bondage. But a perennial temptation, even for long-time believers, is to see that Word itself as a burden — a bundle of rules imposed upon us, which we would escape if we could. Or else we feel that the Word is making scapegoats out of us, and we wish we could snip and trim it so the world will leave us alone.

Sadly, this temptation has played itself out in Western history, with destructive effects on the church. At its most virulent, it can lead us to doubt the very words of Jesus Himself — or look for excuses to pretend that we can’t really know what He was saying. That’s what the head of Pope Francis’ own order, the Society of Jesus, is doing on the subject of marriage.

As LifeSiteNews reported, Fr. Arturo Sosa Abascal, the new Father General of the Jesuits, is trying to defend Pope Francis’ apparent changes in Catholic doctrine over marriage by doing just that.

Now Protestants and Orthodox have argued with the Catholic interpretation of what Jesus meant, whether He made exceptions in cases of adultery, et cetera. That dispute goes back many centuries. What Fr. Soso Abascal is doing is quite different. He is claiming that we can’t really know what Our Lord said in the first place — at least not without a lot more expert academic research. As he told an interviewer:

[T]here would have to be a lot of reflection on what Jesus really said. At that time, no one had a recorder to take down his words. What is known is that the words of Jesus must be contextualized, they are expressed in a language, in a specific setting, they are addressed to someone in particular….

Over the last century in the Church there has been a great blossoming of studies that seek to understand exactly what Jesus meant to say… That is not relativism, but attests that the word is relative, the Gospel is written by human beings, it is accepted by the Church which is made up of human persons… So it is true that no one can change the word of Jesus, but one must know what it was!

We see here the acid influence of secular biblical criticism, which over the past 200 years has eaten away at the most basic narratives of the events of the life of Jesus, undermining our faith that we know anything much at all about Jesus, His life, times and teachings. Seminaries that incorporated such criticism became machines for turning believers into agnostics, to the point that Mainline Protestant seminaries (and liberal Catholic orders) are winding down and closing.

A myth-busting reading of the Miracle of the Loaves and Fishes eliminates the miracle and instead says that Jesus’ preaching led everyone present to break out his secret stash of food and share it with his neighbors. And so on, all through the Bible — including the Virgin Birth and even the Resurrection.

Now it’s easy to say that we want authentic texts, to eliminate copyists’ errors and fully understand the implications of every key word in the Greek or the Aramaic. That kind of textual research is valuable and important. What modern biblical criticism does goes way beyond that. It subjects every phrase in the Bible to a “hermeneutic of suspicion,” and actively tries to explain away every miracle, prophecy and hint of the supernatural. Indeed, one twentieth-century biblical critic, Rudolf Bultmann, formulated this as a principle, which he called “demythologization.” You assume, at the get-go, that supernatural events are simply impossible, then try to extract some moral meaning from the Bible passage anyway.

A myth-busting reading of the Miracle of the Loaves and Fishes eliminates the miracle of Our Lord multiplying the food, and instead says that His preaching led everyone present to break out his secret stash of food and share it with his neighbors. And so on, all through the Bible — including the Virgin Birth and even the Resurrection.

Why would a Christian want to do this to the Bible? There are several possible reasons. You might be embarrassed to walk around using technology and relying on modern medicine, while still believing in events that flout the laws of physics. You fear that such faith makes you seem like a superstitious primitive. That motive was certainly present among the founders of biblical criticism, whose answer to their Enlightenment colleagues at prestigious universities was to recast the interpretation of the Bible itself as a modern research science, as academically respectable as anthropology or history. See, we’re not like those peasants kneeling at Guadalupe or speaking in tongues. We’re much more like scientists in lab coats.

Rendering Unto Caesar the Word of God

Scholars Scott Hahn and Benjamin Wiker wrote a thick, scholarly book on this subject that I was privileged to edit, called Politicizing the Bible. They went back much further than the 19th century, to find the roots of secularizing biblical criticism. They discovered that the  two key founders of this discipline are Thomas Hobbes and Niccolo Machiavelli. It was those two brilliantly persuasive but utterly secular writers who built up the toolkit for explaining away the apparent literal meaning of scripture, dismissing the agreed-upon readings of divine revelation that go back to Augustine and other Fathers of the Church. Neither Hobbes nor Machiavelli was interested in theology. They saw Christian ethics and metaphysics as a barrier to their anti-Christian political goals. They knew that most of their audience wouldn’t abandon the Bible outright. So they taught their readers how to get around the Word of God, in the name of “researching” its “real,” “scientific” meaning.

Hahn and Wiker show how every major leap “forward” toward modern secular readings of the Bible was driven by political hunger and encouraged, even funded, by monarchs who wanted to increase the power of the State at believers’ expense.

Hollowing out the Word of God to strengthen the World and weaken the Church is precisely what Fr. Soso Abascal was doing when he claimed that the lack of a tape recorder makes Jesus’ transcribed words unreliable. In the spirit of Machiavelli, Hobbes, and their heirs, he was cutting us loose from the golden thread of authority that links us to Jesus Himself.

Perhaps Fr. Sosa tells himself that he is helping to free Christians from unwarranted scruples and crippling guilt. But on some level he must realize that what he is really doing is radically different: He is tearing down the central bulwark that Christians use to resist the crushing pressure of a secular world to conform, to remake our faith as unbelievers tell us to, to suddenly “discover” that Jesus “really” said … precisely what the secular world of 2017 just happens to be screaming from the rooftops and imposing via the government. What a weird and wacky coincidence!

In fact, a solid faith in scripture and the Church’s traditional ways of reading it is a very powerful weapon of spiritual freedom, as Christians from the Abolitionists to Alexander Solzhenitsyn have known. It gives us an anchor that keeps us from drifting along with the crowd, from sliding along the conveyor built toward faithlessness and futility, in which the church becomes just another pressure group, and we Christians are indistinguishable from polite, well-groomed agnostics.

CNN and 586 BC: More Evidence of the Bible’s Historicity