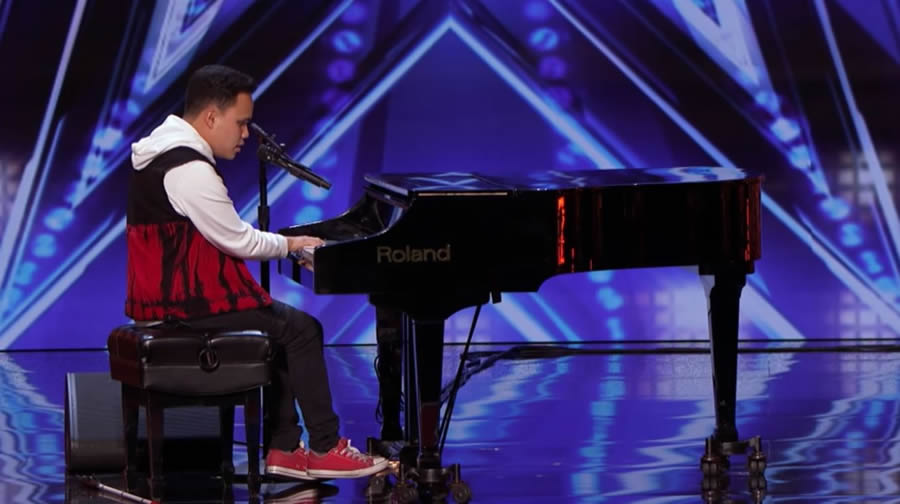 When we turn on our television or smart phones we are bombarded with news that brings us down. Where are all the good stories? They’re still there. Here are the top 10 inspirational stories of 2019 that we hope will bless you.

Joy Break: Man Sings Nothing but the Blood of Jesus at the US Capitol Rotunda in Viral Video.

When new recording artist Edward Byrd toured the U.S. Capitol last month, he didn’t expect to sing in the Rotunda. Now a video of him singing the hymn Nothing but the Blood of Jesus has gone viral.

Protesters in Hong Kong recently sang America’s national anthem while holding the American flag and demonstrating in the street.

In a moving pro-democracy demonstration, several protesters alluded to America’s freedoms when they held American flags and sang the Star-Spangled Banner. According to RedState, the video of the demonstration contrasts with the behaviors of American protesters. “Protesters in America burn the American flag in a sign of protest and athletes kneel during our National Anthem. However, in Hong Kong, where freedoms and independence truly are under threat of being stripped from the people, they’re waving our flags and singing our songs.”

Doctors said T. Scott Marr had a stroke. He was on life support and had little brain function. His brain was swelling. After doctors told Marr’s kids that he likely wouldn’t make it, they decided to pull him off life support and let him pass away. But that wasn’t the end of the story. After weeks of therapy, and a new diagnosis, Marr has returned home.

For Marr, he experienced a miraculous recovery. “I’m not an extremely religious person. I don’t go to church every Sunday,” Marr said. “But I do believe in God. I believe with all my heart. And now this is just proof for me that everything I’ve ever heard is true.

“That he loves me. That he’s right there for me,” he added. “It was pretty much a miracle.”

‘It Will Be a Fun Journey’: Widow and Widower Find Love and a Blended Family of 13

Erica and Spencer, devastated by the loss of their spouses, both joined an online support group. The same group. What are the chances? “We just connected there as friends. He came out [to Utah] for a conference [in May] and we met and just went on a couple dates as friends.” Their church holds a conference every year for widows and widowers to connect.

“It wasn’t long after I got home [from the conference] that I felt a strong prompting from Heavenly Father that I needed to move my family to Utah,” said Spencer. It was an opportunity to gain more support from his church and business opportunities. So he packed up and moved.

After Spencer moved, he and Erica got their kids together and spent time with one another. “We just continued being good friends,” said Erica. “One day it just kind of dawned on me. ‘We’re pretty much a perfect fit for one another.’” In November of last year, they started dating. “I saw how well we all meshed together. And the longer it went on, the more I knew I wanted him in my life.”

Erica and Spencer believe that God has an individual plan for each person. Although Erica’s not sure how God works that out, she knows that God provides opportunities for everyone to learn and grow. “Anything that happens, even though it’s hard, it’s for our benefit to take our faith and to learn from that and to keep pushing forward, because if you do, that’s when you can find happiness and joy and peace.” However, football isn’t the most important thing to the freshman phenom. “Football is important to me obviously,” said Trevor in a post-game interview. “But it’s not … the biggest thing in my life, I would say. My faith is.”

No matter the situation, Trevor says it won’t define who he is. “It’s putting my identity in what Christ says — who He thinks I am and who I know that He says I am.” At the end of the day, it doesn’t matter what people think of him, he explains.

"Just putting my identity in what Christ says and who He thinks I am and who I know that He says I am."
– Clemson QB Trevor Lawrence
pic.twitter.com/bVbP8CC2an

Brittni De La Mora was 16 years old the first time she stepped on stage in a strip club. “I felt like I had finally found the love and the attention and the acceptance that I’d been looking for my whole life,” says Brittni in an interview with The Stream. By the time she got to college, she was dancing in clubs regularly.

A few years and a heroin habit later, De La Mora wanted out. She found out that her grandfather was going to church and asked if she could join him. “I met Jesus at the altar that day and I was given a Bible,” she recalls. “I just started to devour every page that I could possibly read in one night.” She started with Genesis.

“It didn’t matter how much they praised me, how much they affirmed me,” she says. “It still was never enough because your source of confidence and your need for affirmation can never come from the people around you. If you want to feel truly confident and truly fulfilled, it can only come from Jesus.” First 4 Episodes of The Chosen TV Series About Jesus Available to Watch; Full First Season Out by End of Year

The first four episodes of The Chosen, the television series about the life of Jesus seen through those who encountered him, are now available to watch on VidAngel. Pre-production on the remaining episodes begins in July.

Dallas Jenkins, son of Left Behind author Jerry Jenkins, is the co-writer and executive director for the show. He told The Stream that the entire first season — eight episodes — will be available to watch before the end of the year. Jenkins anticipates that the show will extend to seven seasons.

The Chosen is about the life and ministry of Jesus from the perspective of those who knew Him best. That’s important for a couple of reasons, in Jenkins’ view. First, a series with Jesus as a main character, told from the perspective of others, hasn’t been done before. Second, audiences can get to know multiple characters over the course of time through a multi-season show.

Those who have seen the first four episodes have been overwhelmingly positive about it. “We’re hearing from many people who’ve seen all four episodes multiple times, others who are hosting watch parties at their homes. We’ve heard from so many people whose lives have been impacted. The most rewarding responses are the ones we were really hoping for: those people who are saying Scripture has come alive for them in unprecedented ways.”

“I don’t know how people can live through MS — severe MS — without God. He’s pivotal to [my] story. Absolutely central. It was He who made sense out of that which did not make sense.”

He was diagnosed with multiple sclerosis in 1984, Mark Pickup told The Stream. Over time, the husband and father of young children lost the use of his legs and his right arm. He began to lose the use of his left arm too. Just a few years ago, he was on the verge of quadriplegia.

But then the miracle occurred.

One night he woke up. There was a presence in the room. “It was Him [Jesus]. Although it wasn’t audible, the message was clear. ‘Touch your little finger with your thumb.’ I hadn’t been able to do that in eons. My right hand was useless. And sure enough, I did touch it. ‘Touch it again. Do it again.’” Mark didn’t mention it to his wife, LaRee. He wasn’t sure how long it would last. He heard God again in 2013. He said, “Get up and walk with the walker.”

He showed his doctor. As she watched him get out of his wheelchair, he heard her exclaim, “No, no way! No, that’s impossible, it can’t be.” She sent him to a neurologist. The neurologist asked Mark to what he attributed his improvement. “How would I know?” asked Mark. “You’re the doctor!” While an MRI of his brain showed the effects of the disease, there had been no new activity since the previous MRI.

Perhaps God allowed his disease to go into remission to remind that “we must not lose hope in even seemingly hopeless circumstances. That we must never give up on life because we do not know what’s around the corner. We do not know what tomorrow will bring, even supposed miracles, as rare as they may be.” A young woman with Down Syndrome will probably never forget that day in January at the PGA’s Phoenix Open. Amy not only met golf pros Gary Woodward and Matt Kuchar, but they took her on the course with them. Her reaction to playing with the guys — and waving to the large crowd — was priceless. “They love me!” she told her father. “I know, how about that?” he said as he tied her pink and white shoes.

Just before she took her first shot from the fairway of the 16th hole, her dad stood behind her and placed his hands on her shoulders. “You got this, kiddo,” he told her. “Yeah, I got this,” she repeated.

As she stood with golf club in hand before each shot, she kept telling herself, “I got this,” or “you can do this!” And boy, could she! A beautiful shot down the fairway. A great shot out of the bunker onto the green. And her putt? Buried it.

No one will play No. 16 at The Stadium Course better than Amy this week. 👏 👏 👏 pic.twitter.com/iyydmTKK8R

Kodi Lee shocked judges on America’s Got Talent in May when he performed a perfect cover of Donny Hathaway’s “A Song for You.” That’s because he wasn’t just any contestant. Kodi, 22, is blind and has autism.

Kodi’s mom, Tina, told the judges that when she found out he could sing she cried. “That’s when I realized ‘oh my gosh, he’s an entertainer.’” Kodi played the piano as well.

Ironically, Kodi’s performance aired the same day the Supreme Court refused to uphold an Indiana law that bans abortions based on sex, race or disability. Kodi is proof that all lives are valuable and those who suffer from disabilities can have a beautiful and productive life.