Releasing this week on DVD, a biopic on The Lord of the Rings author J.R.R. Tolkien has scarce allusions to his faith. It reminds viewers to reexamine the depth of his work. 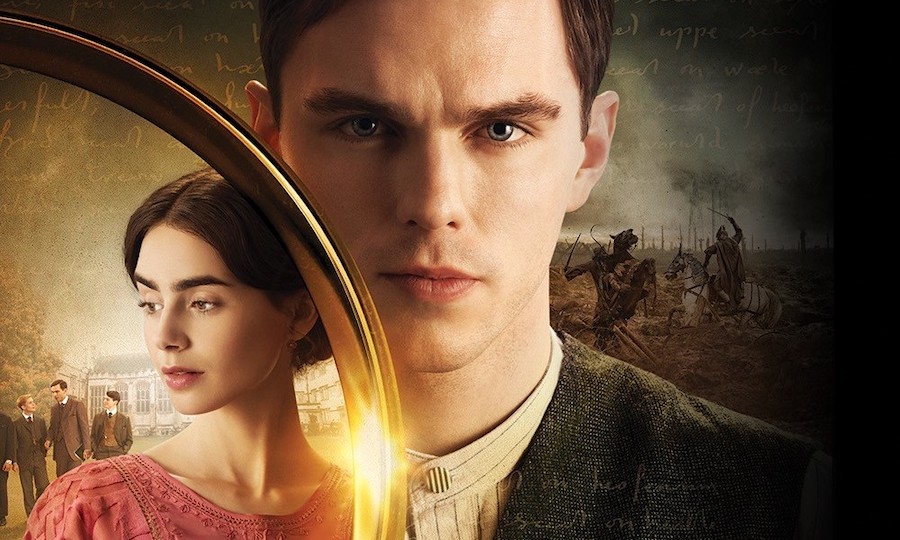 Tolkien, starring Nicholas Hoult as the British fantasy author and Lily Collins as his love interest, released this week on DVD and all home media formats.

Nearly a century before the Marvel Cinematic Universe, one ambitious man created a sprawling mythology that continues to inspire storytellers today. Now the biopic Tolkien tells of his own dramatic origins, fellowship with likeminded artists, and romance with the woman he loved.

Orphaned following the death of both parents, John Ronald Reuel Tolkien worked tirelessly to make his fascination with languages and ancient myths more than an academic pursuit. He earned a scholarship to the University of Oxford and ultimately taught there for decades.

Most significantly, J.R.R. Tolkien singlehandedly created a fantasy legendarium across what is now 20-plus volumes with 982 named characters. His novel The Lord of the Rings defines the high-fantasy genre, with authors such as George R.R. Martin (A Game of Thrones), Donita K. Paul (The DragonKeeper Chronicles), and Brian Jacques (Redwall) admitting their debt to Tolkien.

Works that look back on the British professor inevitably portray him sitting comfortably with a pipe, debating elves with The Inklings — a group of fellow creative scholars including C.S. Lewis and Charles Williams. Tolkien traces his life decades before, taking ample dramatic license.

“We had a version which was trying to follow more closely to the actual timelines,” says director Dome Karukoski in a phone interview from Los Angeles. “But the drama was not moving; it felt more like a Wikipedia page. Then we rewrote it so it better shows the emotions of the characters.”

The Finnish director and his team have staged a lavish period drama, even filming at Tolkien’s hallowed halls of Oxford. Despite their reverent treatment, the Tolkien Estate has disavowed the film. Several critics, who invariably find much to praise, have noted the deeper purpose and spiritual themes of his life may have been lost on the cutting room floor.

The film begins in the battle trenches of France during World War I, a window into the conflict that claimed some 37 million lives. College student “Tollers” Tolkien, as his friends call him, was only on the front lines for a few months. Here the war frames his formative decades.

Gradually, it flashes back to a British countryside years before. The death of his father Arthur Tolkien shatters the pastoral landscape. After pre-teen brothers John Ronald (Harry Kilby) and Hilary move to the industrial city of Birmingham, Tolkien’s mother also succumbs to illness. The orphans come under the care of Father Francis Morgan (Colm Meaney of Star Trek fame).

Karukoski, who grew up in Finland, drew on his own journey growing up without his father to portray their emotions. “I was an outcast and outsider,” he said. “Like Tolkien, I also spoke three languages at the age of four because of all the moving. Tolkien’s stories became an escape from that misery and lonelihood.”

The Tolkien brothers are enrolled at King Edward’s School in Birmingham, where young John Ronald quickly bonds with three other creative young men. Meeting at a nearby bookstore that serves tea, they take on the moniker T.C.B.S. (Tea Club, Barovian Society) for their group. It lasts many years, a forerunner of The Inklings to come much later.

The deeper purpose and spiritual themes of his life may have been lost on the cutting room floor.

Stories centered on resilient friendships during schooldays are often poignant, such as in Dead Poets Society and School Ties. Scenes here of teen boys caught boozing or taking their dates off-campus fill screen time, yet do little to develop characters.

The narrative slips into homage at times, as many biopics do, and does not fully wrestle with its own conflicts.

“Dramatically, we could’ve used a bit more conflict to enhance the film,” says Karukoski. “But I wanted to do a very lyrical, poetic film, which is true to Tolkien’s feeling and emotion. I didn’t want to it to have sharp edges, in that sense.”

Much That Once Was Is Lost

Fans will enjoy spotting visual hints of Tolkien’s myths, from the dragon Smaug to Black Riders, to an evening star referencing Eärendil. When Tolkien takes Edith to Richard Wagner’s Ring Cycle opera, he comments: “It shouldn’t take six hours to tell a story about a magic ring.”

Despite all the sly references, one overarching aspect of his lifelong work goes missing. Some observers have noted the absence of Tolkien’s Catholic faith.

“The film lacks the author’s spiritual commitments,” wrote scholar Professor Joseph Loconte of The King’s College. “Tolkien’s entire conceptual approach, anchored in a belief in the fall of man and in the hope of redemption, helps to account both for the extraordinary realism and imaginative power of his fiction.”

“Tolkien’s entire conceptual approach [is] anchored in a belief in the fall of man and in the hope of redemption…” – Prof. Joseph Loconte

Karukoski has a ready response to the backlash. “We didn’t intentionally downplay his religion,” he says. “One scene I personally liked had young Tolkien helping Father Francis give last rites, showing the spirituality of the Mass. When we screened it for people, it didn’t resonate so it had to come out. These are choices to make the best film.”

The romance of Tolkien and Edith Bratt progresses with sensitivity, a bright spot in the film. One scene of the two lightheartedly tossing sugar cubes into other patrons’ hats at a formal tea actually happened. Yet their wedding is never seen, a shame considering the pivotal role that the sacrament of marriage plays in his body of work.

Several scenes dealing with Tolkien’s zeal for crafting words make it worth seeing. Strong performances from Nicholas Hoult as Tolkien, Lily Collins as Bratt, Meaney as his priest and guardian, and Sir Derek Jacobi (Gladiator) as Professor Joseph Wright propel the story forward.

Certain flourishes in the film pay tribute to the author’s creative legacy. Generations of writers and artists have looked to his work for inspiration. Tolkien’s philosophy and theology of creativity, embodied in his essay “On Fairy-Stories,” have guided many in culture and the arts.

Certain flourishes in the film pay tribute to the author’s creative legacy.

When the story called for pre-Elvish words to be scripted, they enlisted the help of Oxford Professor Andy Orchard who holds the same position Tolkien once did in the English Department. “Tolkien hadn’t created the Elves yet, nor the Elven language,” says Karukoski. “So you have to create some sort of language of faeries that is on its way to being an Elven language.”

Tolkien devised at least ten languages for his elves, dwarves, hobbits, and other fantastic races, spending decades of his life authoring the legends. A scholar in the field of philology, the study of oral and written communication, he published relatively less academic material than his peers, in favor of creating millennia of imagined Middle-earth history.

Employed by the Oxford English Dictionary for two years after World War I, Tolkien would go on to invent or revive a dozen words into popular usage. The Lord of the Rings, regarded in surveys as the best book of the 20th century, has sold over 150 million copies worldwide.

Current fascination with his work shows no signs of letting up. Amazon Studios has committed to a five-season adaptation of early Middle-earth mythology, estimated to cost $1 billion in total (a release date is forthcoming). It reveals why interest in this Tolkien biopic may reach beyond fantasy fans.

“You deserve magic,” Tolkien says to Edith when attempting to win her back. In this two-hour drama, audiences encounter a degree of enchantment and emotion … yet some will walk away feeling they deserved more.

Rated PG-13 for sequences of war violence, some cursing and a brief artistic representation of nudity, Tolkien is currently available on all digital and home media formats. Explore The Stream’s complete films coverage, and sign up to receive top stories every week.