To Save Ourselves From COVID, We’re Sacrificing Children, Part 5: Monoclonal Antibodies Rely on Baby Parts, Too

Regeneron is infamous for relying on fetal tissue, though the company tries to deny it. 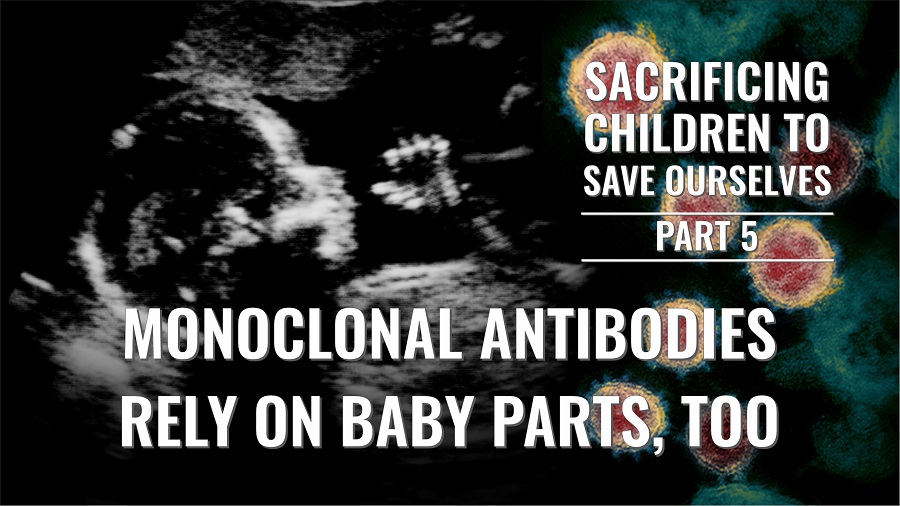 Columbia University Research offers humanized immune system mice models for research using HSC’s (human fetal hematopoietic stem cells and human fetal thymus but can substitute the fetal thymus with other alternatives to make the research eligible for federal funding. (This is no longer an issue since the Biden Administration ended the ban on federal funding of fetal research.)

A team of researchers from Weill Cornell Medicine and Mount Sinai Hospital developed two novel models of humanized mice using five human embryonic stem cell lines. The first, the hPSC-LO, has human lung organoids, and the second, the hPSC-CO has human colonic organoids. The purpose of the study, published 28 October 2020, (Han et al.) was to study the response of human lung and colonic tissue to SARS-COV2 infection and provide in vivo platforms to facilitate drug screening of COVID-19 therapeutics. The hSPC-derived progenitor lung and colonic cells were implanted in mice.

Another topic of great interest is the Regeneron monoclonal antibody cocktail, REGN-CoV2, which was developed with the use of the HEK293 stem cell line. An October 7, 2020 MIT Review article confirmed that Regeneron does use the HEK293 stem cell line, but the Regeneron spokeswoman Alexander Bowie said they do not consider it fetal tissue: “It’s how you want to parse it, but the 293T cell lines available today are not considered fetal tissue, and we did not otherwise use fetal tissue.” Regeneron’s claim here is false.

Even pro-life doctors are prescribing these monoclonal antibodies, not knowing they’re as tainted with innocent blood as any COVID vaccine. Please share this information with anyone you know who’s considering or promoting this treatment, which President Trump took for COVID. He was likely unaware of its evil origins too.

It is vital to point out that, despite the assurances of their spokeswoman, Regeneron Pharmaceuticals has a history of using aborted baby organs obtained from ABR to humanize their mice. In two Science Direct studies published in 2011 and 2017, Regeneron researchers, including the co-founder of Regeneron, George D. Yancopoulos, used human fetal liver obtained from the notorious Advanced Biosciences Resource to humanize their mice using their patented Velocigene© technology.

In a third study, published on 17 March 2021 (Sefik et. al.), conducted by Yale University researchers, in cooperation with Regeneron Pharmaceuticals, mice humanized with human fetal liver were infected with SARS-COV2. After successfully exhibiting symptoms of human COVID-19 pathology, the mice were treated with human monoclonal antibodies. Without these previous studies involving human fetal liver and thymus to genetically engineer their mice, it is doubtful Regeneron would have the technology to produce their COVID-19 monoclonal antibody cocktail.

There are many more examples, but these demonstrate how human embryonic stem cell lines and “fresh and never frozen” human fetal organs are the sine qua non without which the genesis of the SARS-CoV2 pathogen and the rapid deployment of a large array of humanized COVID-19 research models would be possible.

This data supports the spontaneous and visceral response of pro-life people who have intense moral objections to abortion-tainted vaccines and medicines. It is my hope that a new phase of the pro-life movement to protest and resist human fetal tissue-derived medicine and demand alternative untainted antidotes might be launched as Bishop Schneider has urgently called for:

This new pro-life movement cannot remain silent about that monstrous and global structure of sin that is crying out to God for vengeance: the routine use by pharmaceutical, cosmetics and food industries of human cell lines from aborted embryos and fetuses. The exploitation of human embryos and fetuses as a reservoir of biological material, is an abomination that every reasonable man and woman of good will should oppose by denouncing its perverse and diabolical nature.

To Save Ourselves From COVID, We’re Sacrificing Children, Part 4: Dodging Trump’s Ban by Moving to Canada

To Save Ourselves From COVID, We’re Sacrificing Children, Part 3: More Baby Parts Are Needed All the Time

To Save Ourselves From COVID, We’re Sacrificing Children, Part 2: “Humanized” Mice and the Birth of COVID