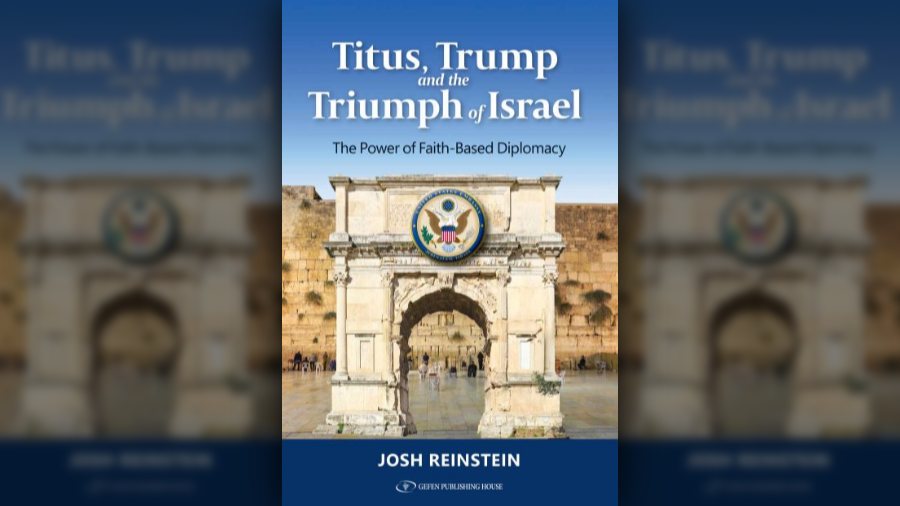 Reinstein is the director of Knesset Christian Allies Caucus and the president of Israeli Allies Foundation. Those organizations encourage and mobilize Jews and Christians to work together for the good of Israel. He also is the founder of Israel Now News, an online news show.

Reinstein told The Stream that, in order to really understand the news in Israel, people need to view it through a biblical lens. This is important because a biblical lens allows people to come up with biblical solutions rather than political solutions. “That’s what works in the Middle East.”

Titus, Trump and the Triumph of Israel outlines the historical aspects of Israel, biblical prophecy and the Trump administration. Much of the book is dedicated to historical events that led to the Jewish people being kicked out of Israel. However, Jews who lived during the time of Titus (when the second temple was destroyed) understood that it was a fulfillment of biblical prophecy, and they would eventually be back in the land of Israel.

What Trump Has Done for Israel

Reinstein also sees prophecies being fulfilled through President Trump’s foreign policies. The Trump administration has done more for Israel than any other president. “What’s impressive about Donald Trump is that when he makes a deal, he keeps it. And he made a deal with the Bible-believing Christians who voted for him. He was going to do certain things vis à vis Israel. And so, he followed through on those things when no one else would.” He continued:

Now, everyone along the way told him he shouldn’t do it. He’s making a mistake. It’s going to lead to war. It’s going to lead to death and destruction, third intifada, but he did it anyway. And what everyone was surprised to find out, is that it actually, it didn’t lead to war … it led to peace. In fact, he was just nominated for a peace prize because of what he’s been able to do, because in Israel it’s better to be biblically correct than politically correct. That’s what brings the results here. I think Donald Trump’s administration understood that. And because of that, they’ve seen incredible success in the Middle East where everyone else has failed.

Most people don’t know what President Trump has done for Israel, in part because the mainstream news media won’t report it. In addition to moving the U.S. Embassy to Jerusalem in 2018 and brokering two historic peace deals in the Middle East, Donald Trump has signed the Taylor Force Act, which prohibited Palestine to fund terrorists with American tax dollars.

“It’s fascinating. … In 2015, [the Israel Allies Foundation] made a list of the top 10 things that America could do for Israel in our wildest dreams. And our goal as an organization was to get one of them done in the next five years.” But in the last three and a half years, Trump has done nine of them. He scrapped the Iran Deal that allowed Iran to get nuclear weapons. He recognized the sovereignty in the Golan Heights area. “That’s a battle that’s been going on since 1967. We’ve been fighting for that. And once and for all [it] makes our border with Syria secure.”

An Incredible Sense of Peace

Reinstein asks for prayers for Israel. He believes that God wants prayers for Jerusalem because He wants the focus on Jerusalem, “because that’s where He’s unfolding His prophecy. That’s where the real story is happening.”

In addition to prayer, people can take action. “I just encourage people to get out and make their opinions heard. Go out and vote. Go out and … do something that puts action behind their belief system.”

When Christians take action, incredible things happen. “It wasn’t until Christians got involved and said, ‘I want the U.S. embassy in Jerusalem’ did that actually happen. And so, we see the incredible success of faith-based diplomacy.”

Reinstein hopes that his book will inspire people. “I hope people read this book and say, ‘Okay, what can I do? How can I be involved? What is my role to play in the fulfillment of biblical prophesy?’ I hope that this inspires people to take a stand for Israel and do something, do a concrete action on behalf of Israel.”

Note: Israel and United Arab Emirates will meet at the White House Tuesday, September 15 to sign their historic peace agreement.

Israel and Bahrain will also meet this week at the White House to sign their historic agreement.