Celebrated Christian athlete is silencing the scoffers with his pro baseball success. 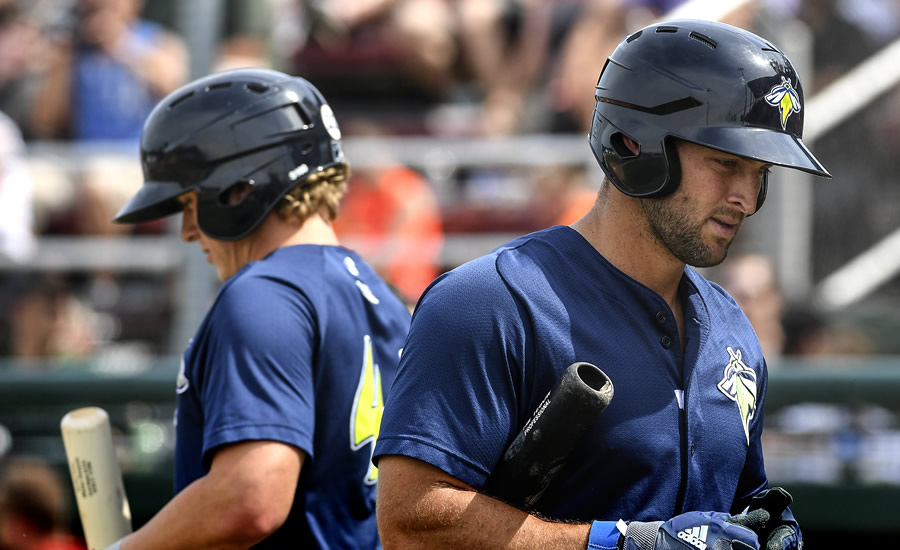 Tim Tebow hit another home run Sunday for the St. Lucie Mets. For those keeping track, that’s Tebow’s fourth home run since being promoted to the Mets Class A team. In fact, the former NFL player is batting .313 since coming to St. Lucie, nearly 100 points better than his average had been with the Columbia Fireflies.

Considering Tebow had not played organized baseball since being a junior in high school — and the mocking and scoffing that greeted him when he said he wanted to give baseball a go — his success might well be called a miracle.

While all the glory goes to God, Tebow credits his on-the-field success with playing regularly again. He told TCPalm in an exclusive interview Thursday, “I feel more comfortable with my swing, feel more comfortable with my game plan I’m having against pitchers and then just playing more baseball helps, too.” He also credits hitting coach Luis Nutera and manager Chad Kreuter.

Listen to advice and accept discipline, and at the end you will be counted among the wise. Proverbs 19:20

Tim Tebow to the Big Apple?

So what about the majors? Will Mets fans see any Tebowing at Citi Field this season? That’s not likely, even with the Mets losing record of 45-51, Tebow batting over .300 and the guarantee he’d boost ticket and jersey sales. Mets General Manager Sandy Alderson said last week he didn’t “foresee” Tebow being brought up to the big leagues in the fall.

Tebow himself believes such speculation is a “dangerous place to be as an athlete.”

Tebow’s weekend wasn’t all about bats and balls. His Tim Tebow Foundation hosted its second annual Team Tebow Service Day. It’s a day where Team Tebow members “members unite to serve their local communities in causes that they are most passionate about.” There are some 22,000 Team Tebow members around the world.

For even the Son of Man did not come to be served, but to serve, and to give his life as a ransom for many.
Mark 10:45

As NFL training camps get underway, it’s interesting to note that Tebow could still be enjoying the bright lights of pro football, rather than enduring the rough and tumble road of a minor leaguer. Former Tampa Bay Buccaneers General Manager Mark Dominik said last year he “begged and begged” Tebow’s agent to convince Tebow to come play H-back for the team. But Tebow only was interested in playing quarterback. NBC Sports writer Michael David Smith said that while Tebow “always struggled” as a quarterback, he probably could have played H-back, running back, tight end or maybe even linebacker had he wanted to play in the NFL. Instead he made the “odd” choice to play baseball.

Today, the path the Lord has Tebow on doesn’t look so odd.

May the God of hope fill you w/ joy & peace as you trust in him, so you may overflow w/ hope by the power of the Holy Spirit. Romans 15:13