On the red carpet for Run the Race, star athlete Tim Tebow gives the scoop on how he met his fiancée, his upcoming movie... and the global impact of his life-affirming A Night to Shine. 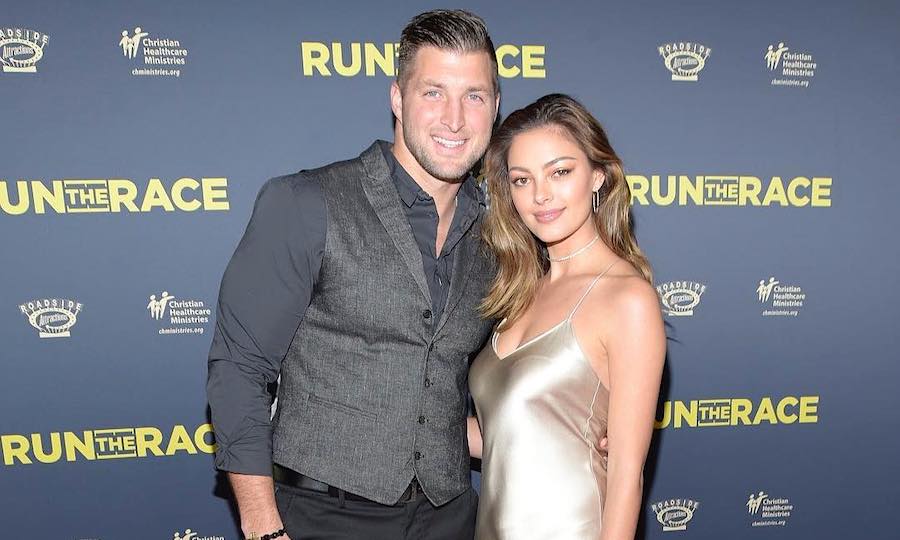 On February 11, 2019, Tim Tebow escorts his fiancée Demi-Leigh Nel-Peters, Miss Universe 2017, down the red carpet at the premiere of Run the Race. Tebow serves as executive producer of the sports drama, in theaters on February 22.

For Heisman Trophy winner and former NFL quarterback Tim Tebow, 2019 is shaping up to be a momentous year. On January 9, he proposed to beauty queen Demi-Leigh Nel-Peters — crowned Miss Universe in 2017.

Through it all, Tebow continues to publicly share his Christian beliefs. “We all go through our own faith journeys,” said Tebow at a media roundtable in Los Angeles. “One of the biggest themes in the movie is understanding that, in your lows, God loves you and He is chasing you. He gave His best for you. You can know that in the lows just as much as the highs — maybe even more so.”

Tebow also spoke to The Stream on the red carpet during the Hollywood premiere of Run the Race at the Egyptian Theatre. Questions from both interviews have been integrated and lightly edited for clarity.

Star Athlete Shines Spotlight on Others

I noticed the pin on your lapel. What does it mean? Tim Tebow: It’s actually for our foundation. It stands for faith, hope and love, which is our mission statement.

I want my life to be one of making others better, because I was in their lives. Whether the platform is football, baseball, movies or my foundation, I hope that I’ve made lives better along the way. If that’s by sharing my faith, smiling, encouraging kids, Night to Shine or whatever it is, hopefully my life is able to encourage people.

Life is not easy. It’s tough for a lot of people. People need to realize they are loved and special even when things are not going good.

Your foundation organized the fifth annual Night to Shine this past weekend. Could you tell us about what happened?

Tebow: It was so incredible. The Night to Shine is a worldwide prom for people with special needs. We had 655 locations around the world in 24 countries and all 50 states. We crowned over 100,000 kings and queens, and had over 200,000 volunteers. It’s not only my favorite thing we do at the Foundation. Really, it’s my favorite night of the year.

Today, when we weren’t talking to the media, I was looking at all the photos and stuff coming in from all over the world — videos from Africa, Europe, here in North America. It’s hard to even put into words how special it was.

You recently announced your engagement to former Miss Universe, Demi-Leigh Nel-Peters. How did you two meet?

Tebow: We’ve had a Night to Shine in South Africa over the last few years. Her sister has special needs, and she got invited to that. Through that, we connected.

We emailed back and forth. Then there were texts, and then calls. All of a sudden, we didn’t stop speaking! And now we’re engaged.

She’s incredibly special. I definitely feel like I’m marrying up. We both kind of knew the first or second time we hung out. It’s hard to explain — you just kind of know.

“I definitely feel like I’m marrying up. We both kind of knew the first or second time we hung out. It’s hard to explain — you just kind of know.”

Abstaining [from sex before marriage] was a choice that we made mutually. We’ve both wanted to do that together, and make it as special as possible. As to our wedding plans, she’s working on that — so you’d have to ask her!

With all the turns your life has taken, what lessons do you take from the journey?

Tebow: If you asked me when I was graduating college, What do you think is going to happen? Back then, I would’ve thought I’d have won a couple Super Bowls by now. But God had a different plan. A door closed, and other ones opened.

Is it the plan I would’ve drawn out for myself? No, but going through that I’ve learned so much. The last few books I wrote were because of those moments. The stories I’ve been able to encourage people with are mostly because of the lows.

Most people can’t relate to winning the Heisman or being a first-round draft pick. But most everyone can relate to when the world says: You suck. Or: You’re not good enough, you can’t do this. It’s trusting Him in the midst of all that.

When you’re following Jesus and God’s plan for your life, is it going to be easy? No. But I believe it’s going to be worth it.

The Heart of Tebow’s New Film

Regarding the film, why do you resonate with this narrative of grappling with faith in the context of sports?

Tebow: The [sports] aspect was personal for me and my brother Robby. We had five kids in our family. Me and Robby are very close — he’s my biggest fan, and I’m his.

We push each other to be better. If Robby was running, I was running. That helped me in sports, because he was six years older. When he became a college football and baseball player, he sent back his college workout and I did it as a 12-year-old.

It’s why I was able to do decent in sports. Running stride for stride with your brother really resonated in my life. Sports is something a lot of people relate to, but it’s just a vehicle for the story.

Rated PG for some thematic content, Run the Race opens in theaters nationwide on February 22. Explore The Stream’s complete Films coverage, and sign up to receive top stories every week.