Tim Kaine, ‘Devout’ Catholic — Not When He Doesn’t Want to Be 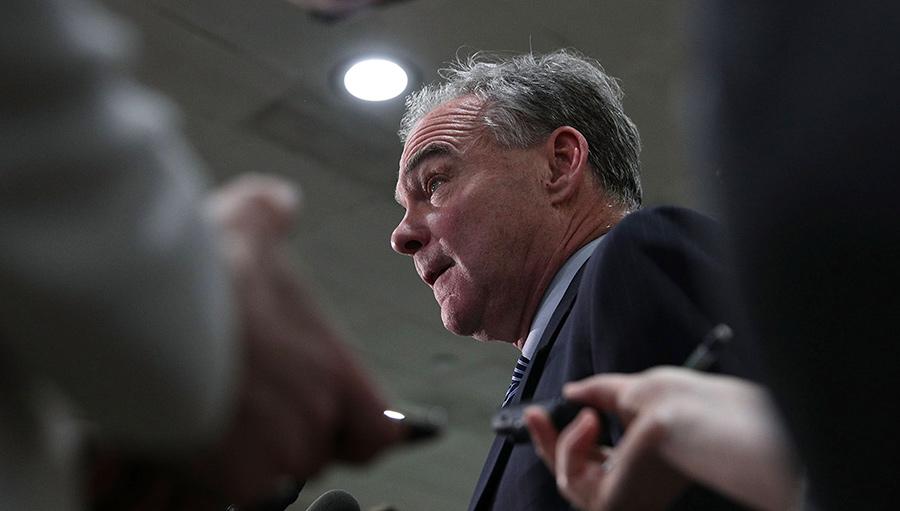 My senator, Virginia senator Tim Kaine, is running for reelection. Most people in the rest of the country know him as Hillary Clinton’s running mate. He’s a self-professing Catholic. “I try to practice my religion in a very devout way and follow the teachings of my church in my own personal life,” he says.

Explaining how his faith directs his politics, he’s said: “We’re supposed to be Good Samaritan people, not the ones who pass by problems on the side of the road, but when somebody is in need, we’re supposed to roll up our sleeves and try to help out.” One political observer said he’s “the real deal.” His faith “is very much a part of who he is, what he believes and what he brings to public office.”

It sounds great. Except for one very big problem. Kaine denies the fundamental right to life of children in the womb. He promotes a horrible act his church explicitly condemns. He also rejects the Church’s teaching on marriage. On the two major social issues of the day, this “devout” Catholic gets the answer utterly wrong.

He Knows the Teaching He Rejects

On January 29th, he voted against the Pain Capable Unborn Child Protection Act. Remember what this law would have done. It would have saved the lives of unborn children who can feel pain when they’re being aborted. These children are human beings being tortured to death. And “devout” Catholic Tim Kaine approves.

Tim Kaine knows the teaching of His Church. For my readers, let me offer the words of the now canonized saint and late Pope, John Paul II. These are from his The Gospel of Life. Speaking with his authority as pope, he says:

I declare that direct abortion, that is, abortion willed as an end or as a means, always constitutes a grave moral disorder, since it is the deliberate killing of an innocent human being. This doctrine is based upon the natural law and upon the written Word of God, is transmitted by the Church’s Tradition and taught by the ordinary and universal Magisterium.

The late pope continued: “No circumstance, no purpose, no law whatsoever can ever make licit an act which is intrinsically illicit, since it is contrary to the Law of God which is written in every human heart, knowable by reason itself, and proclaimed by the Church.”

The Congregation for the Doctrine of the Faith is the chief watchdog of the Vatican. In 2002 it issued an instruction entitled a Doctrinal Note on some questions regarding the Participation of Catholics in Political Life. They stated that politics “is a question of the lay Catholic’s duty to be morally coherent, found within one’s conscience, which is one and indivisible.”

Then, quoting the Second Vatican Council, they continued, “There cannot be two parallel lives in their existence: on the one hand, the so-called ‘spiritual life’, with its values and demands; and on the other, the so-called ‘secular’ life, that is, life in a family, at work, in social responsibilities, in the responsibilities of public life and in culture. The branch, engrafted to the vine which is Christ, bears its fruit in every sphere of existence and activity.”

Like so many Catholic politicians, Kaine says he “personally” opposes abortion but that his faith lets him support it as public policy and law. He knows better. Catholic teaching insists there are truths we know through the exercise of reason. These are revealed in the Natural Law. That law, says the Catechism of the Catholic Church, is “present in the heart of each man and established by reason. This law is universal in its precepts and its authority extends to all men”

How do we know what it says? The Compendium of the Social Doctrine of the Church explains: The natural law “is nothing other than the light of intellect infused within us by God. Thanks to this, we know what must be done and what must be avoided.”

I Agree With Tim Kaine

The unborn child’s right to life is one of those precepts, those truths the light of intellect shows us. Tim Kaine’s church teaches this loudly and clearly. He knows what’s right. He can’t not know that. His church tells him and his conscience tells us.

But I agree with Tim Kaine. We are called to be Good Samaritans. Not the ones who pass by problems on the side of the road. God tells us to be the people who roll up our sleeves and help out when somebody is in need. Yes. But my senator refuses to see that the unborn child facing a horrible death is somebody in need of his help. On January 29th, on the floor of the Senate, Tim Kaine showed himself to be the Pharisee who walks by the person in need.

Democrats Outraged Against Gov. Northam — For Only Half the Right Reasons