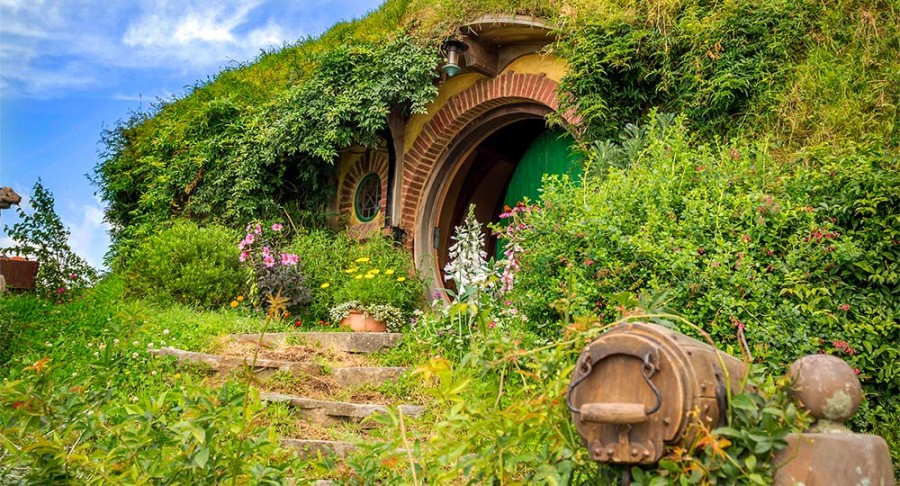 Furnish has published quite a few highly readable books with scholarly heft on the Muslim world. He specializes in apocalyptic movements that fuel jihadi violence in both the Shi’ite and Sunni movements.

His latest book is different though. Very different. And a whole lot of fun. So I decided to ask him about it for The Stream.

The Stream: High Towers and Strong Places: A Political History of Middle Earth is a very unusual book. You applied your scholarly skills not to the world-ending fantasies of jihadis, but the world-building fantasy of J.R.R. Tolkien. Why? What does Tolkien’s work represent to us, that merits examining it as if it were real history?

Short answer: because I’m a geek. Longer answer: because I’ve so loved Tolkien’s world since 1977. That’s when I first read The Hobbit and The Lord of the Rings. I wanted to live in that world. After Peter Jackson’s movies came out, and after I’d taught some military history classes, I became fascinated with the military aspects of Middle-earth.

So I started researching and writing on the great battles and wars of that Secondary World. But in doing so I did so much study of the political actors (Gondor, Mordor, etc.) that my then-publisher recommended making the political history a stand-alone volume. That came out in 2016. My wife and I just republished the book on Amazon.

Think of the huge appeal of Tolkien’s fiction — both in the original books and in the Jackson adaptations. Middle Earth is more than just an escapist fantasy. The books sold in the 100 million plus range. The trilogy was voted the best book of the 20th century in a BBC poll a few years ago. And we all know how successful the movies were.

Tolkien pulls together much that is best in humanity, especially in the subset of Western civilization — courage, hope, loyalty, friendship, self-sacrifice —and does so while appealing to sehnsucht, our “longing” for the “ideal alternative experience.” (As C.S. Lewis, Tolkien’s close friend, wrote about.) Many folks read Tolkien and want to hang out in the Shire and smoke pipeweed. But I always would have preferred to be a Gondorean military strategist living in Minas Tirith. And I thus wrote accordingly.

You go out on an interesting limb. You treat the writings of J.R.R. Tolkien exactly the way you might the real history of Iraq or the Byzantine Empire. Is that because Tolkien himself intended us to read his works as the pre-history of this present earth? So we’re meant to imagine that Frodo and Gandalf, Sauron and Galadriel, all walked on our own soil. Long ages before ancient Sumer or Egypt. We are living now in the Fourth Age, the domain of men. How does that transform our experience of the books and films?

Partly. The first chapter of my book explains this at some length. Tolkien clearly states in many places (most notably his Letters) that Middle-earth is a fictional time, but not a fictional place. It’s ancient (alternative?) history. He also says that we’re probably now in the Sixth or Seventh Age.

The War of the Ring took place in the Third Age. Then Aragorn became King Elessar and ushered in the Fourth Age. That’s the beginning of the Dominion of Men and the fading away of the Elves and Dwarves and Hobbits. Tolkien in fact says explicitly that the gap between the fall of Barad-dûr [Sauron’s fortress] and our own time is about 6000 years. That means the Ring was destroyed in about 4000 BC. I think all of this is very exciting and makes Middle Earth all the more realistic, if not actually real. 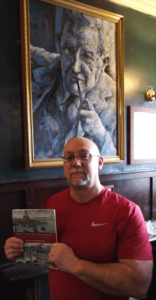 In one of his posthumous works, The Fall of Gondolin (about a famous First Age Elf kingdom), Tolkien make this clear. He puts Gondolin in a list of renowned sacked cites: “Bablon,” “Ninwi,” (Nineveh) “Trui,” (Troy) Rum (Rome).” That is striking. Gondolin is of a kind with Babylon, Nineveh, Troy and Constantinople. (“Rum” was what the inhabitants of the Byzantine Empire called themselves: Romans.) The creator of Middle Earth made it clear that he wanted us to treat his Secondary World historically.

Sub-Creation and the Creator

Most books on Tolkien (to the point of being repetitive) look at his works as mythic literature. How did treating them like history change the way you appreciate them?

It made them, and their world, even more real for me. It got me examining the political systems of the Shire or the Dwarf kingdoms, how Sauron controlled the Orcs, the extent of Second Age Numenorean imperialism. All of these just brought to mind historical analogs (which I write about), and as I said made Middle-earth all the more real.

Many folks read Tolkien and want to hang out in the Shire and smoke pipeweed. But I always would have preferred to be a Gondorean military strategist living in Minas Tirith.

Tolkien spoke in great theological depth (he was a devout Catholic) about “sub-creation.” That is, the effort to put Christian love into the careful creation of fiction, respecting its inner consistency and honoring God’s Creation that way. Did researching this book give you new respect for how seriously Tolkien took that?

Very much so. Tolkien created a Secondary World almost as real(istic) as our Primary one. He gave it its own history, languages, kingdoms and warfare. But more than that, he gave it a morality that is, if not Christian, certainly previewing Christianity. There is one god, Eru. He created the universe and the world(s), of which Arda — Earth — is but one. Arda is overseen, at least till the end of the Third Age, by the archangelic Valar. All under Eru’s overall direction. The Elves are really subservient to the Valar. But Men lived more directly linked to the one God. In fact, the Men of Numenor appear as true, pre-Judaic (if you will) monotheists. They keep a temple to Eru — that is, until Sauron corrupts them. 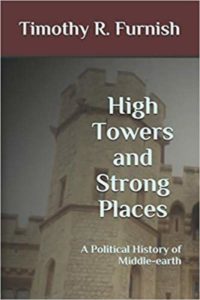 There’s even a hope of Eru coming into Middle Earth and redeeming it from the evil done by Morgoth, the Lucifer figure . My study of this wound up in a stand-alone article, by the way.

The Fading Elves and the Dying, Secular West

One issue you discussed I found fascinating. It’s something I’d wondered about. You ponder the fact that the elves are naturally immortal (except for deaths by violence). You ask whether that, over time, affected their willingness to risk their lives in battle or adventure. (Since they had thousands, not dozens, of potential years of life to risk.) I wonder if that applies to some degree to those of us in First World, extremely comfortable and secular societies. Has it made us so risk-averse that we can’t fathom or properly resist the threats we face? Such as … jihadis, who believe that if they die while killing us they go straight to Paradise? Can we learn something from the “fading” of the elves?

That’s an excellent point that I’d never thought of before. Yes, there’s an analogy. Think of the near-immortal Elves and their (speculative) reluctance to give up their incredibly rich, millennia-long lives. Compare them to modern secular Westerners fearing death. But the reasons differ.

Each of Tolkien’s Elves always know that if he is killed or dies in Middle Earth, his spirit goes to Valinor. (That’s where Valar dwell on Arda.) Then he will be reunited with a body. So any Elven hesitancy to die in battle would be predicated on a wish to remain in Middle-earth. Not a fear of death per se.

Those Who Seek Power Shouldn’t Get It

You note that most of the benevolent governments in the novels are monarchies. Can you talk a bit about Tolkien’s attitude toward politics? Especially his dictum that those who seek power are the least safe to wield it? Can we apply that maxim to former businessman Donald Trump?

See Tolkien’s Letters. He says “my own political opinions lean more and more to Anarchy (philosophically understood, meaning abolition of control not whiskered men with bombs) — or to ‘unconstitutional Monarchy.’” He adds that “the most improper job of any man, even saints … is bossing other men. Not one in a million is fit for it, and least of all those who seek the opportunity.”

By “unconstitutional monarchy” I think Tolkien meant the ancient kind (fittingly enough) — what we would call absolute monarchy. This squares with his conviction that anyone seeking power probably should not have it. But someone born and groomed to be a ruler doesn’t seek that position. He sees it as heavy burden thrust upon him.

Recall that democracies or republics are few and far between in our Primary’s World’s history. The vast majority of political systems across space and time? They have been monarchies. Whether the ruler was called pharaoh, emperor, king or caliph. So they must have some utility, to be so prevalent throughout history. Tolkien takes this into account in Middle Earth.

Monarchies remain out of favor here in the Sixth (or Seventh) Age. So we are left with only the second of Tolkien’s political preferences. That is, putting in power persons who don’t really want it. And yes, to some extent President Trump fits this bill. He clearly didn’t need to run for office. He was wealthy and had nothing to prove to anyone. But he decided to do so because his country was going in the wrong direction. And seemed likely to elect someone (Hillary Clinton) who had spent her whole life seeking power and, indeed, control over others.

Glowing Swords and Bows of Steel

You have a second book in mind, on the military technology and tactics depicted in Tolkien’s chronicles. Please tell us a bit about that.

My title’s Bright Swords and Glorious Warriors: A Military History of Middle Earth. Eru willing, I will finish it this summer. Bright Swords will examine some two dozen major battles from the First, Second and Third Ages of Middle-earth. I’ll proceed just as I do ones in the ancient and medieval military class which I teach in college. I will look at weapons, fighting styles, tactics, strategy and even logistics of armies of Elves, Dwarves, Men and Orcs. Here are some topics I’ll cover, as well:

I may even be forced to consider whether Orcs had latrines. It will be a fun, and informative book. Now — I need to get back to work!