Some of the best advice for dealing with the media can be found in He Leadeth Me, a 1973 book by American Jesuit Father Walter J. Ciszek. Father Ciszek was captured by the Russian army during World War II. They accused and convicted him of being a Vatican spy. He would spend 23 years in Soviet prisons and the labor camps of Siberia.

In one key passage, Ciszek describes how his dismissive contempt for his captors and the absurdity of the charge against him vanished. In a moment, they turned to cold realism when he realized what he was dealing with. The Russians were not about to stop asking him the same questions over and over again for days on end. They were not going to listen to facts or reason. “They were relentless, and they were thorough, and they were good at their trade,” Ciszek notes. 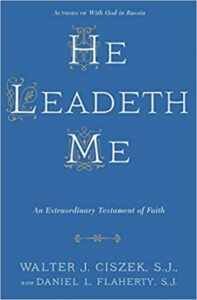 This kind of appreciation for the skill of your enemy is essential to dealing with atheist materialists, whether in the old Soviet Union or in the modern media. Sure, the press is filled with people who are incompetent and make unbelievable mistakes. You and I might consider the MSM something of a joke. But don’t be fooled. In the midst of the mediocrities, you’ll also find experts and fanatics. You’ll meet people schooled in opposition research, psychological warfare and emotional manipulation.

You don’t have to like these facts. (In fact, you shouldn’t.) But you must respect reality. The reporter who has just called you with a list of personal questions might be a goofball — or a trained and skilled interrogator. Assume, to be on the safe side, that he is very likely a deeply damaged, ideologically obsessed and angry human being. One who cares nothing about you, fairness, or even your life. Just like the Russians who tortured Fr. Ciszek.

The Story Was Written Before They Even Contacted You

Every person who comes into the media’s crosshairs should understand this. Nothing you say or do is going to change the story they are going to write. Indeed, the story was written before they even contacted you. They will falsify quotes and leave out facts. They often have reams of opposition research (ugly tales about you) at the ready. If so, they will slowly dole it out to set up and trick a naïve subject.

To echo Fr. Ciszek: They are relentless, they are thorough, and they are good at their trade. Acknowledging this and not expecting fair or decent treatment will leave you more prepared than most. To become hysterical, or to even talk to them, is to play into their hands. Treat them the way surfers treat sharks — as a deadly adversary that should never be underestimated.

When Ronan Farrow Calls You, Hang Up!

On September 14, 2018, I was at home when I got a call from Ronan Farrow of The New Yorker. My high school friend Brett Kavanaugh had been nominated for the Supreme Court on July 9. Now, two months later, Farrow was calling me to tell me that Brett and I had been named in a letter claiming “sexual misconduct in the 1980s.” At the time of Farrow’s call the accuser had not been named. She turned out to be Christine Blasey Ford, a college professor in California. Ford’s charge would upend the Kavanaugh nomination and roil the nation.

I told Farrow I had no idea what he was talking about — and asked him if he could be more specific than “sexual misconduct in the 1980s.” He couldn’t. The only accurate description of what happened that night was by Allahpundit, a popular blogger at the site Hot Air:

Judge apparently found out he was named in the letter when Ronan Farrow called to ask about it. Farrow offered no details about when the incident supposedly happened or where, or even the name of the woman. Judge has been accused of participating in an attempted rape with a would-be Supreme Court justice, in other words, and can’t even get the basic facts of the allegation provided to him. It’s Kafkaesque. And it raises another question. If Democrats knew all along that Judge was the second man and they’re taking this seriously, why is he only hearing about it now, from Farrow? Why not in July from Feinstein’s office or Rep. Anna Eshoo’s office? She was the first person contacted about the charge, remember.

I have been a reporter for some many years myself, and I have done a lot of reading on communism from The Gulag Archipelago to China’s Cultural Revolution. So after I hung up with Farrow, I knew exactly what was happening. I had been set up, and it had been a long time in the making. I could, in sports vernacular, see the entire field. Media critic Ben Smith described Farrow as a writer who “delivers narratives that are irresistibly cinematic … and often omits the complicating facts and inconvenient details that may make them less dramatic.” Farrow also “suggests conspiracies that are tantalizing but he cannot prove.”

I Wouldn’t Play Along

Because I know that most reporters are no different from the old Soviets at Pravda, I knew that they were working from a large file of oppo research. It had been worked on for weeks, if not months or even years. There would be more stories that were all already written. Still, even I couldn’t believe it when the media and the members of the United States Senate began trying to decipher jargon from my high school yearbook. Their goal? To prove that Brett and I had, I don’t know, drunk some beers when we were teenagers. If I contradicted the media narrative, the press would simply edit whatever I said to fit the narrative.

There was only one problem: I wouldn’t play along. I gave one interview to The New York Times, lengthily pointing out that I simply had no recollection of what Ford was talking about. I told them that the Brett Kavanaugh I knew in high school was a good friend and decent guy. He was interested in sports. Even that one interview may not have been advisable, I know.

At one point during the most chaotic point of the Kavanaugh episode, I decamped from Washington. I spent a couple days at a friend’s beach house on the Eastern Shore to try and regain a little sanity. One night at about 3 a.m., there was a loud knock on the door. Here it was, the moment you always hear about in novels like Darkness At Noon, or memoirs like Ciszek’s. The totalitarians were pounding on my door in the middle of the night.

I didn’t answer, of course. Respecting that awesome power and diabolical ability of those lined up against me meant facing reality with a clarity that would help me survive. Like Fr. Ciszek, I understood that I was dealing with highly skilled sociopaths, men unencumbered by consciences.