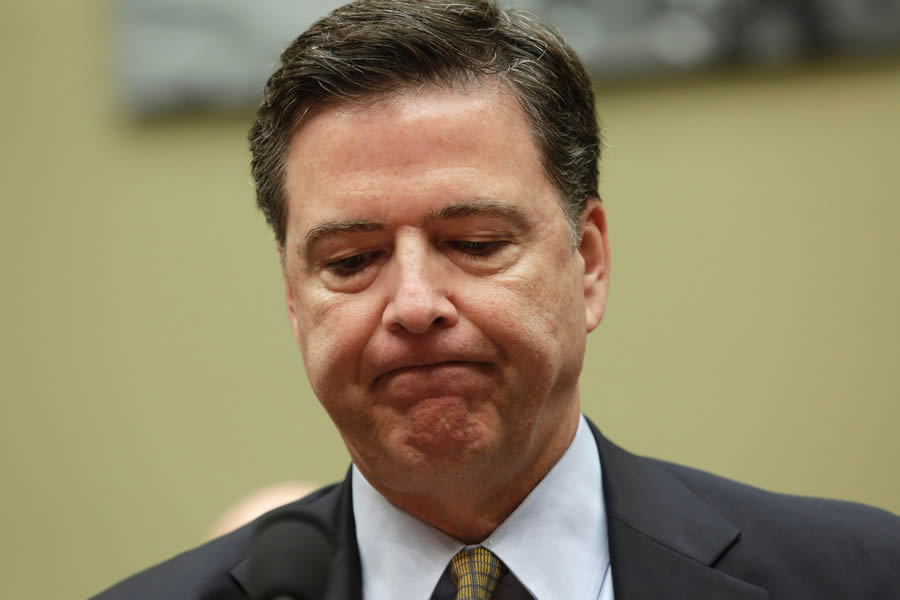 The seditious infection inflicted on the Trump campaign and administration by Comey’s FBI and the Obama legions has been further exposed. Though lost in the 110-decibel coverage of the coronavirus pandemic, two words from Friday will ultimately echo louder: “They knew.”

The FBI — James Comey and Andrew McCabe’s FBI — knew Russia had fed false propaganda to Christopher Steele. Propaganda the FBI was using to justify spying on the Trump campaign.

This shocking information was discovered in a footnote de-classified Friday from the DOG Inspector General’s report on the FBI’s FISA abuse.

At some point in 2017, an FBI unit discovered Russia had spoon-fed disinformation to Steele, hoping to interfere with the election. The unit was also suspicious of Christopher Steele’s ties to a Russian oligarch. (The Daily Caller’s Chuck Ross has the details. As does John Solomon.)

Understand how vile this is. It had been proven by the time Trump was inaugurated that the FBI had found zero evidence Trump had colluded with Russia. (In just one specific case, they knew Lt. Gen. Flynn had done nothing, nada, zilch, zero wrong in talking to the Russian ambassador. Yet Comey and McCabe still sent Peter Strzok to the White House to entrap Flynn.)

What the newly unveiled evidence shows is the FBI knew Trump was not acting with Russia. Instead, Russia had been feeding disinformation to Steele, who was working for Hillary Clinton. This was disinformation designed to undermine Trump to Hillary’s benefit. And yet Trump and his associates, family and friends were the ones hounded for another three years.

Even sicker, James Comey was still insinuating in May of 2019 that the lurid lies the Russians told Steele about Trump might be true. Even when he knew the allegations were false.

And oh, how he and former CIA director John Brennan pretended the point was to investigate Russian interference in the 2016 election. And oh, how their friends (and in many cases current co-workers) in the media, labeled Trump a Putin puppet, a traitor, a danger. Meanwhile poor Hillary Clinton was a “victim.”

Attorney General Barr is Onto Them

This latest bombshell comes only days after the release of a transcript of an undercover operative’s conversation with Trump campaign aide George Papadopoulos. This unnamed FBI informant kept pushing young George to say the Trump campaign had teamed with Russia to hack the DNC. And repeatedly, Papadopoulos pushed back, saying it was not true, that it would have been illegal.

And yet, somehow his denials did not make it into the FISA request to spy on the Trump campaign. Just one of the numerous “major mistakes” DOJ Inspector General Michael Horowitz found with the FISA applications. All of which have now been ruled unjustified.

Attorney General William Barr does not believe they were innocent mistakes. In some of his strongest language yet, Barr told Laura Ingraham, “My own view is the evidence shows that we’re not dealing with just mistakes or sloppiness. There was something far more troubling here. … If people broke the law and we can establish that with the evidence, they will be prosecuted.”

Barr also said something else that should soil the shorts of James Comey, John Brennan and all the others who conspired to take down the Trump presidency. He’s onto you. “What happened to [Trump] was one of the greatest travesties in American history — without any basis,” Barr said. “They started this investigation of his campaign. And even more concerning, actually, is what happened after the campaign. A whole pattern of events while he was president … to sabotage the presidency … or at least have the effect of sabotaging the presidency.”

So When Will We See Some Perp Walks?

The obvious question is, “When are we going to see some justice brought to those who worked to sabotage the duly elected government of the United States? ” Barr reminded Ingraham that cases like this take time to build. Rep. Jim Jordan said last month he expected U.S. Attorney John Durham to finish his criminal investigations this summer. The coronavirus epidemic could slow things down, however.

Plus, we must keep in mind the scale of the investigation. Durham is not just investigating the dubious and likely criminal activity of the FBI and DOJ. His investigation spans several other agencies. In particular, he’s reportedly focused on former CIA director John Brennan.

The Durham investigation also spans continents, with Durham traveling to Italy, England and Australia to determine the role those nations had in helping the Obama Administration with their anti-Trump efforts.

There’s the highly suspicious and sleazy decision by Comey and Obama’s Director of National Intelligence James Clapper not to tell President-elect Trump that the “Steele Dossier” CNN was itching to publish was paid for by Hillary Clinton. Speaking of Comey’s meeting with Trump, who leaked news of the meeting to CNN, giving them the “hook” they needed to report on the dossier and begin the Trump-Russia Collusion Frenzy? Trump was set up by the FBI Director and DNI.

A particular question of mine: Who ordered CIA agents to insist to the musician Moby that the dossier was legit? Who pressured him to use his social media clout to spread that message in January 2017? Remember, this was after the FBI/DOJ and CIA knew there was no collusion and nothing in the dossier had been verified. This was a CIA black-op against the newly elected U.S. commander-in-chief. This is the very definition of sedition.

Why Isn’t Obama Upset At What Happened on His Watch?

Further, did Obama know what his intelligence chiefs were up to? (After all, the decision not to tell the truth to President-elect Trump took place minutes after an Oval Office meeting memorialized by Susan Rice in her bizarre “cover-your-tush” letter to herself Inauguration Day.)

How much did he know about the entire Trump-Russia Collusion Conspiracy? Certainly Durham wants the answer. After all, Lisa Page said Obama “wants to know everything we are doing.” For Obama not to be involved in the efforts against Trump, you have to believe his Attorney General, Deputy Attorney General, FBI Director, Deputy FBI Director, CIA Director, Director of National Intelligence, UN Ambassador, National Security Adviser and Secretary of State were involved without him knowing about it. Everybody in the room had a hand, but the boss was in the dark? If so, why isn’t he screaming bloody murder? Why isn’t his Vice President, Joe Biden?

… And Then After Trump Took Office?

As Barr says, Durham is also looking at actions taken against Trump after he was president. Does this include former Deputy Attorney General Rod Rosenstein wanting to wear a wire to bug Trump in the Oval Office? Efforts to evoke the 25th Amendment as punishment for firing James Comey? Sabotaging efforts by Brennan and Obama loyalists, like the so-called “whistleblower”? Remember, he was caught leaking a false story about Putin and Trump long before he invented problems with Trump’s call with the Ukrainian president.

When so much effort was put into torpedoing Trump’s campaign and sabotaging his presidency, so many people with dirty hands, so many signs pointing to the former President and his top officials, it’s no wonder Durham’s taking his time to get it right.