The Virtue of Plagues: How Epidemics Can Change the Course of History 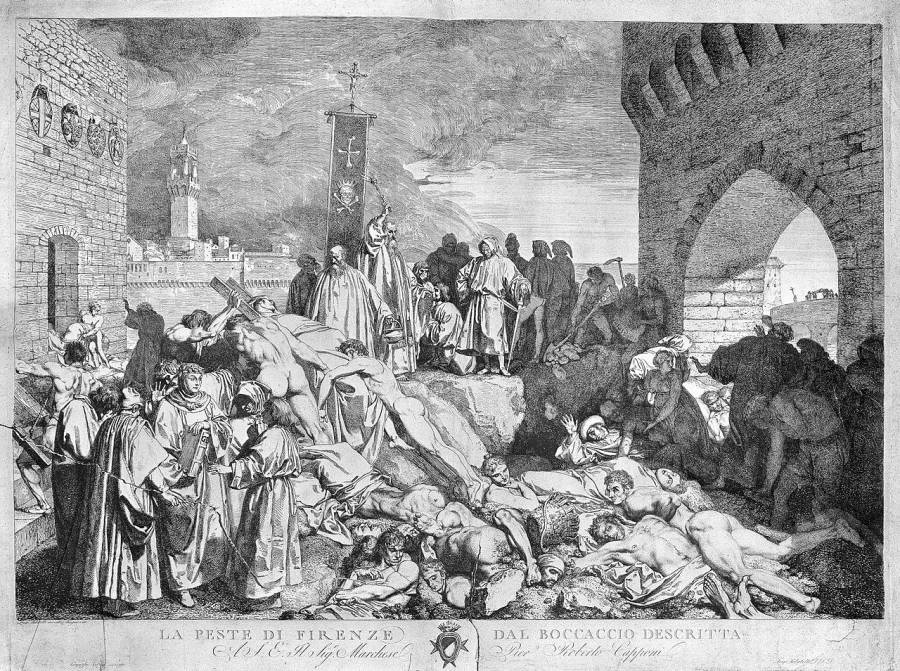 In the early 1990s, as part of my doctoral program in history at Ohio State, I took a seminar on how epidemics affected history. Our main text was the seminal Plagues and Peoples by William H. McNeill. That book taught me a healthy respect for — if not fear of — viruses and microbes. (Hence my Prepper Lite basement hoarding of freeze-dried food, ammo and, yes, toilet paper, which long preceded COVID-19.)

As R.S. Bray wrote in his excellent Armies of Pestilence: The Impact of Disease on History: since “a brand new infectious agent may engulf us, transmitted quickly and efficiently” we should ensure that “the great pandemics of the past and their effects upon man and his organisations were not forgotten.”

Coronavirus is indeed a global pandemic afflicting, as of this writing, nearly 700,000 people. The overall mortality rate is around 4.6%. In this country we have over 125,000 confirmed cases. Some 2200, or about 1.8%, of those have died. Many comparisons of this disease to the seasonal flu have been done, such as this one. I won’t repeat that exercise, Instead, I will try to put coronavirus into historical perspective.

Classical Athens was hit with a horrible epidemic, which Thucydides narrated in The History of the Peloponnesian War. This was probably typhoid. (See “Pandemics That Changed History” for info as to what specific disease typified each plague discussed.) This disease has a mortality rate between 12% and 30%. Considering how horrible it was, according to the famous Greek historian, probably the latter.

He describes in detail the symptoms, which killed usually within a week of onset. Medicines that helped some seem to harm others. “But the greatest misery of all was the dejection of mind in such as found themselves beginning to be sick.” Many died alone, with no one to care for them. Prayers to the Greek gods “proved all unprofitable.” In fact, their temples were full of those who had gone there for help — and died.

On the positive side, those who survived it gained not only immunity but “much compassion both on them that died and on them that lay sick.” And of course the major result of this plague was that it helped Sparta win the war.

In 541 AD the eastern Roman, or Byzantine, Empire suffered the first major recorded bubonic plague epidemic. This disease, which can kill up to two-thirds of those who contract it, probably did for some 40% of Byzantines. Certainly in the capital, Constantinople. A Monophysite bishop, John of Ephesus, survived it, as did Michael the Syrian. Both wrote about it.

“It would be right for us to call it not only a sign of threat and of wrath but also a sign of grace and a call to repentance.” John of Ephesus

The grotesque symptoms are the same as those of the Black Death, some 800 years later. Michael said “the mercy of God showed itself everywhere towards the poor, for they died first.” “Every man lost hope of living, and was afraid to go out.” John goes into much more, and depressing, detail. According to him, 300,000 died in Constantinople alone. Corpses rotted in the street, unburied. Highways were deserted. Entire villages were depopulated. “If it was evening we thought that death would come upon us in the night, and again if morning had broken, our face was turned the whole day toward the tomb.”

The Persian (Sassanian) Empire tried to take advantage and attack the Byzantines. But they too were afflicted. Animals, both domesticated and wild, died too. “Buying and selling ceased and the shops with all their worldly riches…closed.” The Christian (albeit heterodox) John, however, had a different take than Thucydides. “It would be right for us to call it not only a sign of threat and of wrath but also a sign of grace and a call to repentance.” And his account ends thus: “We have left these matters for the remembrance of others who will come after us” so that “they may repent and ask mercy continually, lest this chastisement be thrown upon them.”

The most devastating historical effect of “Justinian’s Plague” may well have been that it so weakened the Empire that it was unable to stave off the Muslim invasions in the next century. These ultimately deprived Constantinople of about half its territory. And centuries later, they would bring down what was left of the Christian Roman state.

The most famous, and deadliest, plague in history was the Black Death which hit Europe in 1347 and resurfaced, periodically, for centuries. The following year an English monk, Henry Knighton, recorded an account of its effects there. Those infected who died did so within two or three days. As in the earlier Byzantine epidemic, entire villages died out. Buildings fell into ruin. Sheep died in droves. Much like with the Persians vis-à-vis the Byzantines, the Scots “believing that the wrath of God had befallen the English … assembled in Selkirk forest with the intention of invading the kingdom” only to be plague-stricken themselves.

The Bishop of London initially allowed remission of all sins, except debt. But eventually things got so bad that “the Pope [Clement VI, in exile in Avignon] granted full remission of all sins to anyone receiving absolution when in danger of death.” Overall as much as half the European population died.

The Plague returned to Europe every few years — although decreasingly lethal — until 1720. It killed Shakespeare’s son Hamnet, and well as tens of thousands more, during one of its regular outbreaks in the Bard’s lifetime. (Probably why his plays mention “plague” 105 times. Falstaff, in particular, wields the term as an insult.) The disease killed millions in China and India in the 19th century. It even hit San Francisco — specifically, Chinatown at the turn of the 20th century. Just three years ago bubonic plague killed almost 200 in Madagascar.

What Can We Learn from the History?

What can those of us living in the time of coronavirus learn from all this?

First, and most obviously, pandemics have been a staple of human history.

Second, they were far worse for our ancestors than for us. Bubonic plague can almost always be stopped by modern antibiotics such as streptomycin. Ditto for typhoid, although there are worrying signs that that disease is developing antibiotic resistance. We also have vaccines and anti-viral medications for viruses. But that doesn’t mean diseases can’t mutate, or new ones emerge — such as we’re experiencing.

Third, epidemics can change the course of history. Sparta won the war with Athens in no small measure due to the latter’s affliction. This set the stage for a coalition (led by Thebes) to in turn take on and weaken Sparta. And who benefited from that? Philip of Macedon, and his son Alexander. A potent 6th century Byzantine Empire, especially with armies commanded by Belisarius, might well have kept Islam bottled up in Arabia. Instead of being the world’s second-largest religion, the followers of Muhammad could have found themselves a small, regional cult.

Counter-factuals are harder to come by for 14th century Europe. But we do know the first phase of the Black Death resulted in demand for labor, thereby killing off any possibility of large-scale slavery on that continent. The Catholic Church also came into question, due to its perceived inability to keep God happy. This led to skepticism and, indirectly, to the rise of Hus, Tyndale — and, eventually, Luther.

Each of us should take this epidemic, especially during Lent, as a God-given opportunity to get right with Him.

Will coronavirus so weaken the United States economically that China becomes the world’s dominant power again (as it was 500 years ago)? On the other hand, might Communist China be so discredited that it undergoes regime change—allowing its growing Christian population some say in policy? Could Iran’s Shi`i theocracy, the world’s foremost sponsor of terrorism, finally fall? And if so, would it be replaced by a more moderate government, or by a harsher Iranian nationalist IRGC-driven leadership?

Most importantly, will our society be able to lessen and ultimately control the coronavirus, such that the death toll remains relatively modest? Or will the disease ravage our population?

Probably the most important thing that Westerners, particularly Christians, can learn from these earlier plagues is found in the writings of Bishop John of Ephesus. To “repent and ask mercy continually, lest this chastisement be thrown upon” us.

Mocking those of us who pray in times like these is now second-nature to our secular intelligentsia. But we know that God works in history, and not always kindly. Job had everything taken from him. God chastised the Israelites via the Babylonians and the Assyrians. His own Son was crucified, and all the Apostles save one died a violent death at the hands of persecutors. In Luke 13:1-5, Jesus is asked about some Galileans killed by the Romans. He rejects the idea that they — or others killed in a tower collapse — were “worse sinners” who deserved their fate. Christ concludes “Unless you repent, you too will all perish.”

We will all die. Perhaps not by coronavirus, and no longer by the sword. But certainly by another disease, accident, or the slow decay of time. Let us hope and pray that our secular leaders and medical personnel do their best for our collective good. But in addition each of us should take this epidemic, especially during Lent, as a God-given opportunity to get right with Him. That could be the major virtue of a plague such as this.