The Tragedy of Pope Benedict: Ten Years Ago, Papa Went Out for Cigarettes, and Never Came Back 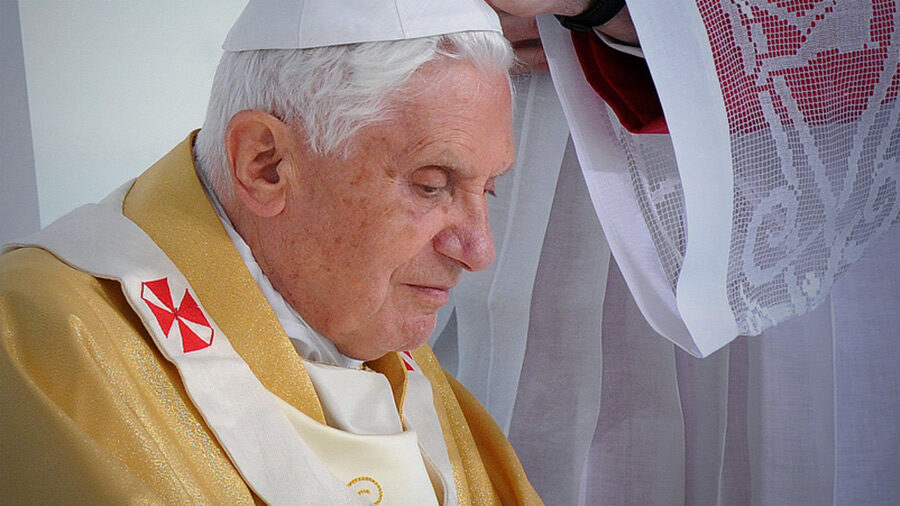 This week I’m going to try to do the impossible: to put my thoughts about Pope Benedict XVI into short columns. The task requires a book. But for now, I’ll have to settle for a two-part series which I hope can make some kind of sense, though I doubt I will reach a conclusion.

My whole life since age 14 has been consumed with supporting the restoration of traditional, orthodox faith and worship inside my Church. My crusade began when the religion teachers at the high school my dad had helped to build systematically denied the most basic doctrines of Christianity, to a classroom of gullible blue collar kids whose hard-working parents had trusted the school with their souls. Ex-seminarians in tweed jackets and bitter nuns in pants suits used sarcasm, cynicism, crass logical fallacies and their (mediocre) academic credentials to tell the sons and daughters of cops, mailmen, and sanitation workers:

Not What Our Parents Were Paying For

And so on. They also denied specifically Catholic doctrines that might not offend my readers here, concerning the pope’s authority, the Eucharist, and the other sacraments. But these heretical teachings would have offended the children’s parents, if they had known about them. They hadn’t signed up to pay for “Mater Christi Burned-Out Liberal Post-Protestant High School.”

I won’t rehearse the whole story here. At first I embraced the lax, loosey-goosey and guilt-free view of the world I was learning about. But then, thinking all of it over, I had an epiphany about my teachers:

What if they were just … evil?

I started doing my own research, in the 1907 edition of The Catholic Encyclopedia. And talking to older priests. I found one solid teacher (of history, not religion) who shared my concerns. She let me tag along with her to audit M.A. classes in theology taught by the saintly Fr. John Hardon, S.J.

40 Years of Banging My Head Against the Wall

And I set out to expose the corruption:

I spent the next three years or so debating with [these teachers] ; I reported them to my parents and the principal, and then to bishop and papal nuncio, in a carefully detailed document that nearly got me expelled. When consequences came — when angry fellow-students confronted me, when a radical sister stood me before the class alone to defend Humanae Vitae “in the face of a starving world,” when I went in alone to face the teachers, and chaplain, and principal, who demanded to know what I was doing and why — I simply thought of Frodo, carrying the ring to the brink of Doom. And I wasn’t afraid.

The principal didn’t fix things. He asked me “If you’re so unhappy with what we’re teaching why don’t you find another school?”

I answered “If you’re so unhappy with the teachings of the Church, why don’t you find another job? And if that’s a threat, please speak with my attorney — here’s his card.” (Yes, I had an attorney. I wasn’t a normal high school student.)

The bishop didn’t fix things. My letter to him (which our Catholic attorney drew up pro bono) was ignored. Bishop Francis Mugavero was too busy annulling 100 percent of the marriages that came to his tribunal, and running a massive illegal gambling operation through dozens of church “Las Vegas Nights.”

And covering up the sexual abuse of kids, which included our high school chaplain, later defrocked for molesting teen boys. That same priest blabbed the contents of my confession to my teachers, which I reported to the bishop, and was again ignored — even though the priest by violating the seal of the confessional had excommunicated himself.

The Vatican did nothing about our school. My letter to the papal nuncio (ambassador) to the U.S. was met with silence.

I’m Just One of Millions of Quixotic Failures

I’m not repeating all this to boast, or even to whine. Though I started young, in most ways I am utterly typical of orthodox Catholics worldwide. We embraced the difficult, complex teachings of the Gospel as our Church historically taught them. We tried our best to live them, for all our weaknesses and failures. But we also faced a constant, incessant, caustic and mocking chorus of shame and derision from within the Church itself. From nuns, teachers, priests, and even bishops.

These people had embraced the libertine spirit of the age. They’d accepted the most outrageous, destructive claims of liberal scripture scholarship, and secular psychology. And now we know that a fair percentage of them were practicing homosexuals, with a shockingly high number practicing on underage boys.

These people took over the parishes our parents had built, and gutted their beauty. They hijacked the liturgies our ancestors had prayed, and dumbed them down with politics. They took our kids and taught them filthy lies, a “new gospel” of the kind St. Paul once warned against.

Our Shepherds Coddled the Wolves

And we looked to men like John Paul II and Benedict XVI to protect us. We knew we were part of a hierarchical Church, which demanded strict obedience of one’s legitimate superiors. So we could do almost nothing to priests or bishops who stood above us — except to appeal to authorities who stood over them. To plead like patients in a hospital for the Chief of Surgery to save us from the witch-doctors and quacks who had taken over our ward, and were plying us with poison, even infecting our children.

We got our hopes up when John Paul II became the pope. But virtually nothing happened. He treated the bishops promoting heresy like well-meaning, errant colleagues. Then he left them all in place. He wagged his finger at Marxist-tainted, increasingly gay orders like the Jesuits. But he never suppressed them. He agonized at the sex abuse crisis, insofar as he could be persuaded it was even real. But he didn’t clean it up.

We chalked all this up to naivete on his part, to his background in Eastern Europe, to one excuse or another. But we all knew that we hadn’t been protected from massive abuse by the one man who had the power to.

Surely Ratzinger Will Do Something

Then we got our hopes up again when Pope Benedict took the throne. This man, a Western European genius who’d fought in the trenches of leftist academia … surely he would see the profound corruption and theological evil that was afflicting a billion Catholics. Surely he at least would wield his (theoretically absolute) power to purge the Church of our abusers, of Christ’s enemies within.

Instead, he made some feeble efforts, wrote some exquisite books … and resigned for murky reasons, the truth of which we might never learn. And when he left, the Pedophile Faction of cardinals elected a Machiavellian schemer to take his place. Now the whole System is against us, from bottom to top. And we’re expected to bow and scrape and pretend to respect an enemy of the Faith, preening in the costume of the Vicar of Christ. To look away when he embraces abortionists, flatters Communist China, and denies historic doctrines of our Faith.

Pope Francis knows how to use the power of the papacy. He knows how to suppress his enemies, to silence his critics, to demoralize and defeat those whose doctrines he disapproves of. He’s doing for the doctrine of Antichrist what real Catholics have waited a lifetime for some pope to do on behalf of Christ’s.

In my next column, I will try to understand why John Paul II and Benedict XVI failed, why their legacy is vanishing as if … they’d never been popes at all.