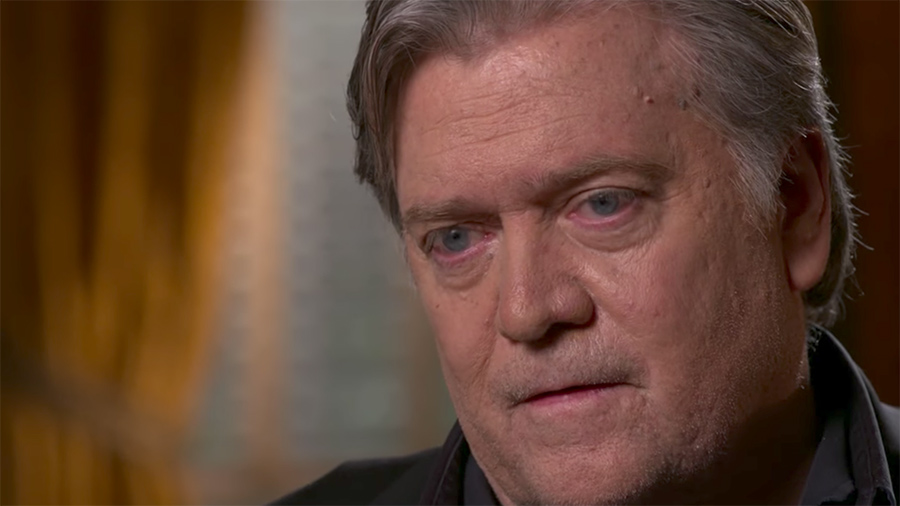 Steve Bannon: Leader of the Opposition

Remember how weird it was when Fox News joined the rest of the Mainstream Media in rushing to call ultra-close swing states for Joe Biden in the 2020 election? In ridiculing plausible claims of fraud, and mindlessly accepting transparent, obvious lies? Then painting the 99.99% peaceful protestors of January 6 as terrorists and insurrectionists? I felt like I’d fallen asleep and woken up in Soviet-dominated Poland, circa 1978. If even Fox was in on “the fix,” and National Review was playing echo-chamber to MSNBC, where could we turn? Steve Bannon created, with shoestring resources at first, the alternative we needed.

His Internet-based program War Room was willing to talk to whistleblowers from fraught states such as Pennsylvania and Arizona. He was willing to agree with our gut feeling: It was mighty strange that so many swing states where Trump was ahead suddenly stopped counting, then kicked back in with equally sudden new waves of votes for Biden. Bannon has never dropped the issue of election fraud. He regularly warns viewers that no depth of failure by the Democrats will matter if they still have the wherewithal to hijack the vote totals. “Elections have consequences. Stolen elections have catastrophic consequences,” as Bannon daily repeats.

Bannon also speaks to genuine conservative resistance figures whom most editors at Fox (except for Tucker Carlson) wouldn’t touch through a hazmat suit. He has highlighted the brave reporting of Julie Kelly at American Greatness, on the cruel and un-American treatment of the January 6 political prisoners at GITMO on the Potomac. Bannon features Darren Beattie of Revolver News, whose deep digging helped expose how the majority of participants — and all the leaders — of the supposed conspiracy to kidnap Gov. Gretchen Whitmer were FBI plants. Beattie then turned to offer similar evidence about those who broke the law on January 6.

Catch other piercing analysis on Bannon’s show from culture critic Raheem Kassam, politics reporter Jack Pobosiec, and occasionally even from me.

Bannon keeps stirring up resistance to un-Constitutional and invasive vaccine mandates, featuring long-time feminist firebrand Naomi Wolf, who has become one of the most eloquent defenders of medical freedom.

No surprise that the Stalinist kangaroo court in Congress, the viciously partisan January 6 committee, wants to see Bannon in prison. He courageously laughed off their subpoena, and is ready to go to criminal court to face the consequences. We need hundreds more fighters like him if our movement’s to have a chance.

If you’re not watching Bannon, either online or via Real America’s Voice, you don’t know what’s coming next. Because by his entrepreneurial media effort, Bannon has captured the leadership of grassroots conservatism in America. And he’s watering it with facts, top-notch analysis, and courage. We owe him, big-time.

Mike Lindell: A Tough Man with a Soft Pillow

Did you ever see Mr. Smith Goes to Washington? On the surface a scathing look at political corruption in our nation’s capitol, it really was a paean to the fundamental decency of Americans and our system. Mike Lindell is one of those Americans who still believes all that is true. After battling drug addiction and finding Christian faith, Lindell built a large and thriving company, My Pillow, creating jobs for thousands of Americans. He could have left it at that.

But Lindell has poured his dedication and treasure into righteous causes. Remember the movie Unplanned? Lindell’s pro-life commitment made him a major investor in that film, and he cashed in that chip by insisting that he himself play the bulldozer guy who demolished the Planned Parenthood clinic at the end. You’ve got to love this man.

Since then, Lindell has poured millions into seeking the truth about the 2020 election, even creating his own media venue, Frankspeech. Perhaps more importantly, he’s a major sponsor of the most important voices for election integrity, medical privacy, and our Constitutional order. That’s why you’ll see My Pillow ads on the podcasts and shows of people like Eric Metaxas, Jason Jones, Steve Bannon, Dinesh D’Souza, Tucker Carlson, and other political heroes.

But you won’t find My Pillow on the shelves of many major stores, which acted in a coordinated effort of political cancellation to try to destroy his company. I take pleasure in ordering more quality, high-end household products than I really need, so I can support Lindell, as he has supported us.

This pioneering medical researcher invented the key technology that makes possible mRNA therapies, such as the current COVID vaccines. Displaying more integrity than most in the Big Pharma world, Malone was appalled when he saw his invention being abused. (I’m reminded of Dr. Jerome Lejeune, a pro-life hero whose love for Down Syndrome patients led him to discover its genetic basis. He was later heartbroken to see his own research used to create prenatal tests that led millions of Down Syndrome babies to get aborted.)

Malone went public with his dissent, warning that the COVID vaccines were being radically overused, and in fact ought to be reserved for the small segment of the public at highest risk for death from COVID — such as the elderly, and those with co-morbidities such as diabetes. He has especially warned that the vaccine should not be given promiscuously to children and healthy young adults.

For his trouble, Malone has been demonized, dismissed, erased, and banned. His key contributions to mRNA technology were “disappeared” from his own Wikipedia page, and bureaucrats like Dr. Anthony Fauci (who never invented anything, or even treated a patient) have tried to paint him as some crank who opposes all vaccines.

Last week, Malone was summarily banned from Twitter, losing 500,000 followers, for unstated violations of “terms of use.” Follow Dr. Malone instead at Gab, Gettr, or Substack, and be grateful we still have doctors who take the Hippocratic Oath seriously.

Eric Metaxas: A Voice of Conscience

Okay, I’m biased here, because Eric is a friend. But we only became friends in the course of him plying his public ministry for countless important causes. While we were both at Yale at the same time, we never met until a decade later, at a pro-life event he was keynoting in New York City. There he informed me that after graduation, he had found Jesus Christ.

An author of a dozen distinguished, delightful books, Metaxas had his chance to “make it” as a public intellectual, of the kind our elites like to designate. His award-winning biography, Bonhoeffer, made all the best-seller lists and got him an invite from the Obama White House to speak at the National Prayer Breakfast. Had Eric played his cards right, he could have gone the rest of his life getting feted inside the Beltway and featured on NPR, reviewed in The New Yorker and consulted by government panels.

Instead, Eric came out boldly in support of Donald Trump’s presidential run. He burned countless bridges to elite circles even in the evangelical world by supporting Trump in office, and speaking his mind about the dubious 2020 election. Occasionally he did so in song:

The last straw was when Eric abandoned the uttermost outposts of respectable opinion by opposing the COVID vaccine, with its links to abortion. So his delightful autobiography, Fish Out of Water, won’t get its respectful mention in the New York Times Book Review. He won’t be invited to speak about the profound new book Is Atheism Dead? at schools like Baylor or Notre Dame. Instead, he’s hawking My Pillow products on his Salem radio show.

Eric learned that for a decent man, the price of writing books about figures like William Wilberforce and Dietrich Bonhoeffer is that you sometimes get called to act like them. Eric does. Subscribe to his updates and find his books here.

I’m glad that I could include at least one Member of Congress in my Freedom Fighter list. The truth is, pickings were slim. How many Republicans as candidates were eager to pick up Donald Trump’s endorsement when they needed it, who turned out on January 7, 2021 to have spines of jelly and nerves of glass?

Rep. Taylor Greene is an exception. She has made it clear that she will not assimilate herself to the Borg of a dysfunctional, hapless Congress at the price of her campaign commitments — and the views of her constituents. Democrats actually tried to expel her from the House for some sloppy rhetorical excesses on her part many years ago — the same Democrats who raised bail money for Antifa arsonists and terrorists last year.

Rep. Taylor Greene has been holding Republicans to their own words on immigration, gun rights, medical privacy, and countless other issues. She has also shown fantastic courage in questioning the Deep State narratives about the 2020 election and the January 6 defendants. She led an official probe into the horrid conditions to which non-violent American protestors have been subject in D.C. jails. She regularly obstructs the rubber-stamp approval of reckless spending efforts by Rep. Nancy Pelosi. In other words, she acts the way we should expect every single Republican to act in office. And for that she deserves our admiration and gratitude.

It also likely explains why she was just permanently banned from Twitter.