If you read 1984, you’ll remember that it contains a book-within-the-book. The beaten-down hero, Winston Smith, receives the samizdat manuscript from a member of the possibly fictional group, The Brotherhood. It claims to represent an underground resistance movement against the perfected totalitarian state led by the Ingsoc (English Socialism) Party.

As readers, we never find out if The Brotherhood really exists. It might be just a glue-trap for catching potential dissidents. Likewise, we never learn if there is really such a person as Immanuel Goldstein. He is the reviled scapegoat dissident on whose followers acts of terrorism and sabotage get blamed (as Stalin once blamed Trotsky’s). Perhaps the ruling elite of the Ingsoc Inner Party merely invented him, as a devil to play off against its equally nebulous substitute god, Big Brother. 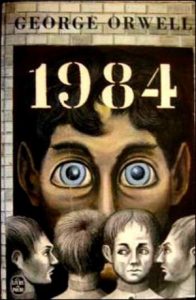 A Book Within a Book

Whether or not Goldstein ever existed, he’s listed as the author of this book-within-a-book. Entitled The Theory and Practice of Oligarchical Collectivism, it explains the Machiavellian logic behind the otherwise puzzling practices of the Party. In it, we learn about Doublethink, the practice of self-brainwashing to believe whatever the Party teaches, however self-contradictory. We also learn the origins and inner logic of a nightmarish ideology and regime.

For George Orwell’s purposes, this manuscript served to offer his quite serious diagnosis of how socialist parties (national in Germany, international in Russia) betrayed the egalitarian ideals in which that movement was rooted. As someone struggling to hold onto his own faith in liberal, democratic socialism, Orwell hoped that 1984 could rescue that movement from totalitarian temptations.

Here is a chillingly contemporary selection from Orwell’s (and “Goldstein’s”) original text in 1984.

The new aristocracy was made up for the most part of bureaucrats, scientists, technicians, trade-union organizers, publicity experts, sociologists, teachers, journalists, and professional politicians. These people, whose origins lay in the salaried middle class and the upper grades of the working class, had been shaped and brought together by the barren world of monopoly industry and centralized government. As compared with their opposite numbers in past ages, they were less avaricious, less tempted by luxury, hungrier for pure power, and, above all, more conscious of what they were doing and more intent on crushing opposition. This last difference was cardinal. By comparison with that existing today, all the tyrannies of the past were half-hearted and inefficient.

Part of the reason for this was that in the past no government had the power to keep its citizens under constant surveillance. The invention of print, however, made it easier to manipulate public opinion, and the film and the radio carried the process further. With the development of television, and the technical advance which made it possible to receive and transmit simultaneously on the same instrument, private life came to an end. Every citizen, or at least every citizen important enough to be worth watching, could be kept for twenty-four hours a day under the eyes of the police and in the sound of official propaganda, with all other channels of communication closed. The possibility of enforcing not only complete obedience to the will of the State, but complete uniformity of opinion on all subjects, now existed for the first time.

A Fragment from the Novel 2048

Below is a fragment from my unwritten novel 2048. It looks back at how freedom was lost in the U.S. and throughout the West. Like Goldstein’s work, it dissects the totalitarian movement we see at work today. But it does so from the viewpoint of almost 30 years later, when it has triumphed almost completely.

To describe how our current zealots think and act, I’ve borrowed the term Anarcho-Tyranny. It best describes the current theory and practice of today’s Woke left.

At first blush, the name of this political system suggests self-contradictory nonsense. Anarchists oppose the very existence of government itself. Tyrants are rulers who expand their power relentlessly, in defiance of national customs and natural law. What would it even mean to say that someone favors at once both Anarchy and Tyranny? However, practical politics frequently force us to work beyond the boundaries of merely logical thought. What someone in power wants to do may very well contradict the stated ideals he claims to work toward, and the ethics he proclaims.

The Anarcho-Tyrant sees that the very existence of churches and families stands in the way of his own exercise of power. They are barriers against his complete domination.

Crude examples of this from the past would include corrupt popes who used their office to enrich their family members. Or evangelical Christians who cited the Bible in defense of enslaving black people. Or liberal Democrats who found it advantageous to keep millions of poor people dependent on massive government programs, for multiple generations.

What we see in the new generation of Anarcho-Tyrants is something more sophisticated and so more perverse. The Anarcho-Tyrant wishes to take the most viscerally appealing and politically useful elements from each of two contrary tendencies. He then can combine them. He may cherry pick from the weapons offered by Anarchy and Tyranny, as he finds useful. The goal, of course, is always perfectly consistent: to gain and hold more money, status, and power.

Look at the question of “liberating” people from certain legal, ethical, and social restrictions. For instance, traditional sexual mores and morals. The liberal, in past decades, might conclude that religious strictures cut off certain avenues of human happiness. For instance, the Biblical ban on homosexual behavior, or on abortion for sexual convenience. So he would agitate to see the relevant laws change, so the State would stop interfering with private conduct.

The Anarcho-Tyrant sees further. He realizes that the very existence of churches and families stands in the way of his own exercise of power. They are barriers against the complete domination of the State, the Media, and the educational establishment. And these are his chosen instruments of social control.

So he argues that even the existence and free expression of such religious beliefs or family values somehow oppress groups he designates as “victims.” (For instance, pornographers, professional abortionists — and their customers.) These traditional beliefs retard the absolute “equality” of dissenters with people who honor those beliefs. They result in “exclusion.”

That’s a phenomenon old-fashioned liberals would have accepted as part of the quaint practice of “free association.” But the Anarcho-Tyrant has progressed far beyond such 18th century scruples. He will use the power of the State to repress the speech and actions of millions of private citizens. But in doing so he’ll claim to be “liberating” disgruntled minorities.

Of course what he’ll actually be doing is liquidating rivals for cultural power. That much becomes clear once a tipping point is passed. Once the “oppressed” groups, such as the LGBT movement, become more powerful than their “oppressors,” logically the liberation movement should be over.

But the Anarcho-Tyrant knows better than to dismiss his most fervent soldiers till the war is completely over. He wants, and will demand, unconditional surrender from these conservative forces. He will not be satisfied until every church preaches, and every local school teaches, the same “liberating” creed. That is, until they are effectively annexed by the State, like the “Patriotic” Catholic Church in China.

From 2010 on or so, the wealthiest, largest churches proved so eager to remain “respectable” that they quickly complied. This sped the process of homogenizing and rendering harmless Christian resistance. So did Pope Francis’ alliance with Communist China, which signaled his acceptance of the Chinese model of church-state relations worldwide.

Again, from my unwritten novel 2048, the most dramatic expression of Anarcho-Tyranny, of course, emerged in the rise of the powerful movements Black Lives Matter and Antifa. These began as street protest groups in the early 2020s. By 2035 they had become quasi-official political police, though not bound by the same written laws or judicial review. The model here (perhaps unconscious) seems to have been the German National Socialist SS. It began as a party militia, but after the Nazi rise to power became a part, and the dominant part, of that country’s official police force.

Beginning in 2020, but escalating quickly after the contested election of Joseph Biden and the Democratic takeover of the U.S. Senate, these two movements became crucial. They served as political enforcers for one political party against all others. They also served the most radical wing within that party, terrorizing and silencing one-time moderates.

the Anarcho-Tyrant will use the power of the State to repress the speech and actions of millions of private citizens. But in doing so he’ll claim to be “liberating” disgruntled minorities.

The street riots of 2020 nominally started as “peaceful protests” over a few alleged incidents of police brutality. They soon turned into dangerous, destructive attacks on entire neighborhoods. The opportunity for looting and violence rewarded the most aggressive “street soldiers” of the left, and terrorized opponents. Meanwhile, with almost no exceptions, local officials who were Democrats refused to impose law and order.

So far, this sounds like simple Anarchy. But a closer look reveals the paradoxical power of Anarcho-Tyrannical practice. Long before these riots occurred, most local governments where they occurred had disarmed private citizens. They had stripped them, in defiance of the U.S. Constitution, of their right of self-defense. Hence the people were utterly dependent on the police force’s “monopoly of violence.” But mayors and governors who stood down those police left citizens helpless, and handed the monopoly of violence instead to political gangs.

In some places where laws permitting private firearms still existed, citizens offered resistance to these attacks on their property and safety. At this point, the Democratic officials pivoted quickly from the Anarchic pole to the Tyrannical, sending well-armed officers to arrest those “guilty” of self-defense.

Most were accused of grossly inflated crimes, and served long prison sentences. Making examples of people like Kyle Rittenhouse, Jake Gardner, and Mark and Patricia McCloskey served its purpose. When the new, 19-member U.S. Supreme Court effectively nullified the Second Amendment to the U.S. Constitution, expected popular resistance hardly materialized. Few wanted to be the last person imprisoned in defense of “outdated” freedoms inscribed by “slaveowners.”

Once the citizenry of the United States had been completely disarmed, the last backstop that country’s founders had trusted against tyranny was gone.

And the rest, as they say, is history.