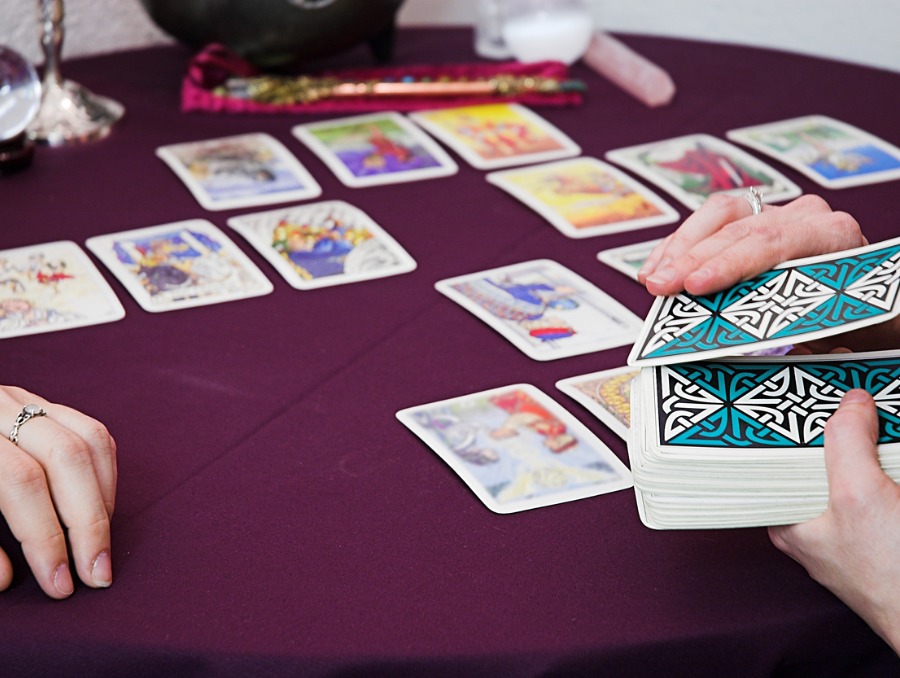 An endcap at Whole Foods in Arlington, Texas, is not where I expected to spot a fancy tarot card deck in gift-wrap packaging. Arlington ain’t Sedona. “Uh-oh,” I told myself, “Are tarot cards coming back into fashion?” A few days later, my wife and I were at a fundraiser for a local arts center in Bedford. Bedford ain’t Berkeley. Yet set up in a booth was a young woman offering tarot card readings. The chair in front of her was never empty.

A quick Google search confirmed my suspicions. We’re experiencing a burst in popularity of tarot cards. The New York Times in 2017 celebrated “Tarot is Trending.” The Guardian promoted it as a form of therapy in 2018. One writer said she counted 550 tarot apps in the Apple Store before giving up. An Amazon search of “tarot cards” renders 10,000 results. Tarot cards and tarot card readings are a rage. (Similarly, The New Yorker just posted a piece on the resurgence of astrology, which our Tom Gilson picked apart Friday.)

I get it. Believe me, I get it. As it happens, this Halloween marks the 20th anniversary of what was the defining moment of my Christian walk. I tell the full story here. Before giving my life fully to Christ, I was a tarot card fanboy.

I loved having readings. I bought about half a dozen different decks. I had a shelf full of books. I studied tarot cards harder than I’d studied any subject in school. I’d watch tarot card readings whenever I could, from Venice Beach to New Orleans. Loved the stories I’d see emerge from the images. I’d do readings for people for fun. Heck, I actually taught some people who were already getting paid to do “psychic readings.”

Let me put it to you very simply. “Any card at any time can mean any thing.” And if something can mean anything it means nothing.

I put the tarot cards aside after meeting my wife and having to figure out what I really truly believed. Then came the Halloween party at work were I was asked to do tarot card readings. I ultimately agreed, but only if I could make a complete utter joke of it. Well, the joke was on yours truly. The line of people wanted the real deal. And I delivered. And the Holy Spirit started speaking to me: “This is not yours to do. You are on the wrong side.”

Party was long over, tables put away and still people were lined up. “This is not mine to do. I’m on the wrong side!” The spiritual world was real. And there was a right side and a wrong side. I knew that I knew. I finally staggered down the hall, ashen. Spent. A few steps from my office I found myself collapsing against the wall. And Jesus caught me.

So if anyone knows the lure of the tarot cards … and the dangers … it’s yours truly. We shouldn’t be shocked. If there wasn’t a lure, why would the Bible be so clear in its warnings about divination and soothsayers?

And the attraction in today’s tense, conflicted post-Christian culture makes perfect sense. A writer at Medium put it well: “So much has been torn down, and inevitably, people still need something to believe in. People need some kind of spiritual construct. I think a lot of people are finding with the tarot something they can grab onto and use as a beacon to find that spirituality.”

But that beacon leads those who follow it astray.

The spiritual deception is grave.

Millennials, particularly young women, are being attracted to tarot cards. They’re told it will empower them. Help them find “their truth.” So let me address Millennials. First off, understand there are readers who are flat out conning you. And there are tarot card readers who are conning themselves. And that gets us to tarot’s dirty little secret.

As I said, I’ve read all the books. I’ve studied the cards. I’ve practiced the trade. First, you learn the basic meaning of each card. Then you learn each card’s alternative meanings. Then you learn that the meaning, positive or negative, depends on whether the card is right side up or upside down. And then you learn that the meaning also depends on its relative position to the cards next to it. In other words, a “negative” card in the past can actually be “good” if the card next to it indicates a change for the better. And vice versa.

Wait, there’s more. Then you learn that an isolated part of imagery itself might contain a meaning tucked within it. The symbol could also jump out as “pacifier.” Pacifier, plus chariot? Congrats. You or someone close to you is going to deliver twins.

Is your own head spinning yet? We’re just getting going.

The star on the dude’s head? A bright idea. The ruffles on the dude’s sleeves? You’re in the driver’s seat but easy ruffled. The wings on the front of the chariot? Rapid movement. The buildings behind the chariot? You’re leaving something behind. The number 7? Seven has assorted meanings. It can mean seven days. Seven o’clock. Don’t drive your car after drinking 7-and-7. Oh thank heaven for 7-11.

Before you go give these tarot cards any power over your life, and put cash in the pocket of tarot card readers, understand a bit of history. Tarot cards derive from the same source as your standard deck of cards. Do you really think there are deep truths hidden in the same cards you use to play Go Fish? Believe that and you’re not playing with a full deck.

Remember the “joke” I was going to have at that Halloween party? I was set to give card readings using baseball cards. Sorry, but there’s no deep wisdom, glimpse of your future, or path to riches to be found in a piece of cardboard that smells like bubble gum. (Well, assuming the card isn’t a mint condition Topps 1952 Mickey Mantle rookie year card. That sucker’s worth about $1.1 million.)

I do not mean to mock. I’m mocking my own past folly. Again, I understand the yearning. It’s a human impulse. We want to know the future. We want to know that what’s ahead is secure. If it isn’t, we want the heads-up. Stepping into the unknown is scary business.

Tarot doesn’t help. Even if the cards could tell you something about the future, they don’t give you the power to change the future. This is why we must hold to the God who made Himself known. Proverbs tell us to “trust in the Lord with all your heart and lean not on your own understanding” (Proverbs 3:5). Not on tarot cards and tarot card readers. You want to secure your future? You want to have a better life? “In all your ways submit to him, and he will make your paths straight” (Proverbs 3:6).

God has power that a mere card deck will never have. “Be confident,” Philippians says, “that he who began a good work in you will carry it on to completion until the day of Christ Jesus” (Philippians 1:6). The Lord works out everything to its proper end. (Proverbs 16:4)

He tells us: “Look at the birds of the air; they neither sow nor reap nor gather into barns, and yet your heavenly Father feeds them. Are you not of more value than they?” Yes, we are. Jesus would go on to die for us, we mean so much to Him.

God is the same “yesterday, today and forever.” A tarot card isn’t the same from one second to the next.