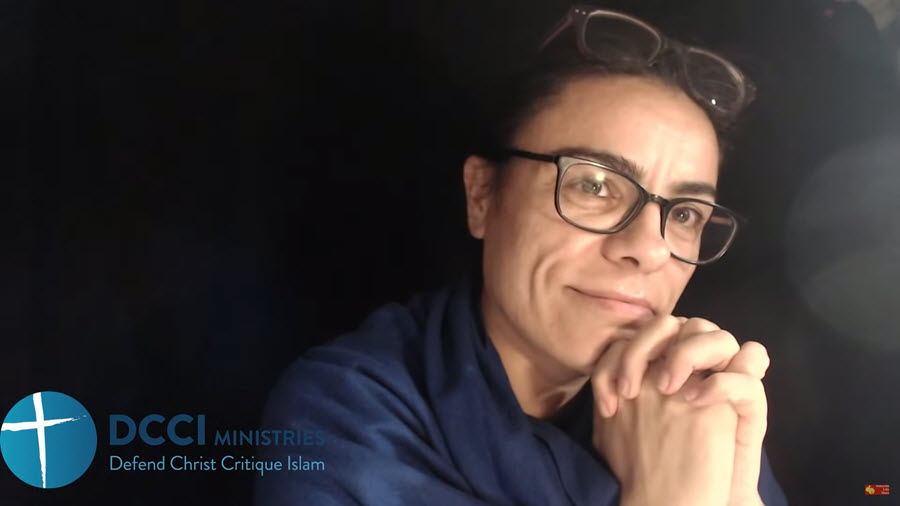 Hatun Tash shares her testimony in "Why I Left Islam" for DCCI Ministries. She was stabbed in London's Hyde Park on Sunday, July 25, 2021.

Last Sunday (July 25), another person was stabbed in London. But this wasn’t just the usual big city crime. And it didn’t happen just anywhere. The victim, who is alive but still in hospital, is Hatun Tash. She is a former Muslim who converted to Christianity, and is active in ministry to her former co-religionists. The locale where she was attacked? England’s famous “Speakers’ Corner,” in Hyde Park. The assailant, wearing a black robe and with his head covered, has not yet been captured.

Demography Changes Can be Dangerous

Now, we don’t know whether her attacker was a Muslim. Odds are that he (or she) was, however. England’s Jedi Knights are not known for their violence — unlike the movie ones. Nor are its milquetoast Anglicans. (Yes, I realize that phrase is redundant.) Overall the UK’s population is some 5% Muslim. However, in London it’s at least twice that. Christianity is still Britain’s largest religion as it is in the world, overall (2.2 billion). But at the same time, Christians are the most persecuted. Especially when they live with Muslims. Eight of the 10 worst countries for Christians are Muslim-majority ones.

There is clearly a correlation between Islam and ill treatment of those belonging to other religions, particularly Christianity. And this tends to get worse, the greater the Muslim population. The UK has a severe problem with Pakistani Muslim men sexually exploiting young non-Muslim girls. Churches, particularly Catholic ones, have been vandalized in France. Even Notre Dame Cathedral burned. (We were told this was an accident, remember.) Muslims make up at least 5% of France’s population. One more example: Sweden. That refugee-welcoming country is now 8% Muslims. And violent street crime has gone up in tandem. Post hoc, ergo propter hoc is only a fallacy until it has tons of data backing it up.

At this point I must, of course, insert the usual boilerplate. No, not all Muslims are violent. In fact, the vast majority of the world’s 1.6 billion adherents of Islam are not. But its founder, unlike Christianity’s (or Buddhism’s), was a violent man who led armies in battle. And the deity whom he purported to speak for enjoined his followers to go and do likewise. When I was in Istanbul a few years ago, I saw the (alleged) swords of Muhammad in the old Ottoman palace. I’ve been to Jerusalem three times, and couldn’t find any swords belonging to Jesus.

Allah’s words in the Quran, as well as Muhammad’s in the hadiths, set the pattern for Muslims. Thus “apostasy” is a grave sin. So too is heeding anything Christians believe. Like the Trinity, Jesus’ divinity, or His Crucifixion or Resurrection. And so on.

Any religion’s doctrines largely reflect the teachings of its founder. Christian beliefs come from Jesus. Buddhist ones from Siddhartha Gautama. So of course Muslim doctrines derive from the “revelations,” and other sayings and practices, of that religion’s founder. And the results? Huge percentages of Muslims today want shari`ah (Islamic law) instituted. Many of those — even in modernized places like Pakistan, Egypt and Palestine — favor stoning for adultery and the death penalty for converting to another religion.

Keep Your Criticisms to Yourself

There is even a push to make people in non-Muslim countries abide by Islamic law. Prominent Islamic politicians have been pushing the international community to ban “criticism” of Islam. Well, why shouldn’t they? Muhammad “the prophet” had his critics killed. And that famous dhimmi, Barack Hussein Obama, said as a U.S. President that “the future must not belong to those who slander the prophet of Islam.” Is it any surprise, then, that growing and emboldened Muslim populations in Western countries think they have the right to silence “those who slander the prophet of Islam,” like Hatun Tash?

Islam comprises, at the moment, only 1% of the American population. But it’s growing rapidly, and within a few decades expected to surpass Judaism as the second-largest religion here. There is data that shows as the Muslim population of a country grows, so too do demands for more Islamic law and customs in the public sphere. (In case the aforementioned examples of Britain, France and Sweden did not persuade you.)

Earlier this month, in Texas of all places, a judge ruled that a Muslim woman must submit to a Shari`ah court for a divorce, instead of U.S. and state law. Soon we can expect demands for polygamy to be recognized. (The Left jumped on this bandwagon a few years ago.) Muzzling Christians as perpetrators of “hate speech” is already being attempted by LGBTQ activists and social media platforms. Islam will be similarly coddled soon. Almost a decade ago a poll showed that the majority of Muslims in the U.S. did NOT think the First Amendment should allow criticism of Muhammad. No doubt that figure has grown by now, egged on by the likes of Obama, Ilhan Omar and Rashida Tlaib.

A Blade Swings Both Ways

The Left’s current enthusiasm for censorship will further enable Islamic intolerance. Maybe “progressives” will come to their senses before Christian evangelists are being knifed here. But I doubt it. They are too dense, and hate Christianity too much. Thus, they cannot see that the same Islamic blade which cuts a Christian like Hatun Tash can just as readily slash Leftists. And, at the rate American society is going, probably will. Progressives should beware of sharpening the “Prophet’s” blade.