The decision against South Bay United Pentecostal Church made legal sense. What's worrying is the way both sides argued 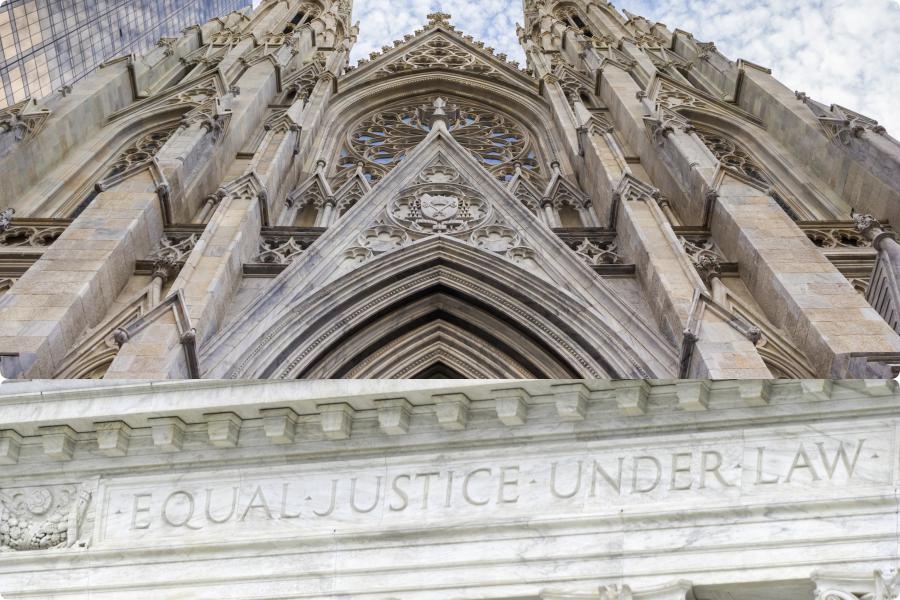 The front of St. Patrick's Cathedral in New York City, over the motto on the front of the Supreme Court Building

It was a quick decision not to overrule state law and lower courts, produced under the gun. A bare 5 to 4 majority supported the state against the church. Not exactly a big deal for religious freedom, but it could give us a sign of a coming big deal.

On Friday, the Supreme Court refused to overrule California’s limits on religious services. Like other gatherings of their sort, they could fill at most 25% of their occupancy limit. Even then the law limited them to 100 people at a time.  The case is South Bay United Pentecostal Church v. Newsom, Governor of California. You can read the majority and minority opinions here. They’re not long. Just five pages, and clearly written too.

As the Alliance Defending Freedom noted, the decision was “procedural in nature, narrow in scope. The court simply chose not to grant temporary relief on an emergency motion.” That’s true, but not exactly the point. All the justices, pro and con, believe the law must treat churches fairly. That’s the problem.

Chief Justice John Roberts joined the four liberal justices in the majority, and wrote the decision. Justice Brett Kavanaugh wrote the dissent. Justices Clarence Thomas and Neil Gorsuch joined him. Justice Alito voted with them, but didn’t join in the dissent.

As far as I can see, the two sides agree about religious freedom. They just disagree about a fact: What is a comparable business? Roberts argues that “comparable secular gatherings” were just as restricted as churches. He included concerts, sports, plays and movies, and lectures. The law left out “dissimilar activities,” like operating grocery stores and banks. In those, “people neither congregate in large groups nor remain in close proximity for extended periods.”

The majority believes churches don’t belong in the same group as grocery stores and banks. The minority thinks they do. The first believe the law applies to churches. The second insist it’s unfair to them. They disagree only on the judgment of fact.

The exemption for offices and factories complicates this a little. Gorsuch was partly right. But the very strict rules for offices aren’t very different from those under which the law requires churches to operate. They’re only exempt from the occupancy cap and that may be in practice not so big an exemption as it appears.

A Word for the Chief Justice

When the decision came out, many people jumped on Roberts. Typical was one Facebook post, from a biblical scholar, that claimed the chief justice was placating “Leftist elites.” It called him “bad” and “gutless.” His friends gave it lots of likes and over 100 shares. Almost nothing excites a certain kind of person more than the chance to name and shame a traitor.

Roberts wasn’t betraying the side, or the Constitution. He offered a plausible reading of the law, as plausible as Gorsuch’s. In fact, I think a slightly better one.

Oddly enough, the church’s own statement explains why. Gorsuch quotes it approvingly. “Assuming all of the same precautions are taken, why can someone safely walk down a grocery store aisle but not a pew?” Because you don’t walk down a pew. You sit in a pew for extended amount of time, probably a much longer time than you spend walking through the grocery store.

The church’s own example shows why worship differs from shopping. It’s more like a lecture than grocery shopping. Sitting in a pew is much more like the “comparable secular gatherings” Roberts mentions than those Kavanaugh includes.

The state can only require of churches what it requires of other enterprises like them. No one says that religious enterprises be given a special status. That’s the problem. To be precise, it’s true as far as it goes, but it doesn’t go far enough. It points to the problem, which could be a big one for churches. And synagogues, mosques, and temples as well.

The natural question to ask is: What about the First Amendment? Doesn’t its protection of the free exercise of religion make comparability irrelevant? Or at least less important? Doesn’t it push back against the state’s attempt to tell churches what to do? Isn’t one implication that churches are both like and very unlike “comparable” businesses?

Of course, the Bill of Rights gives us no absolute rights. Your right to free speech doesn’t let you slander someone or lie in a contract. No one has ever read the free exercise clause to free churches entirely from government authority. State and Church always negotiate where they’ll draw the line.

But so far the law has recognized that religious groups have more freedom to do what they think they should than other enterprises. The Amish can refuse to fight in the Army, even when the draft applies to everyone. The Catholic Church can ordain only men when anti-discrimination laws require women be given all jobs. The First Amendment gives churches (and synagogues etc.) a special place in American law. It gives them a particularly extensive freedom.

A Denial of Freedom

This decision essentially denies that freedom. Yes, it was procedural in nature and narrow in scope. It’s not the court’s last word even on this matter. Right. But look at the way both sides argued. Look at the way the church itself argued. They gave up the First Amendment as it’s been understood through American history.

Roberts claims the authority of the First Amendment for his reading. The “restrictions appear consistent with the Free Exercise Clause of the First Amendment,” he argues, because “similar or more severe restrictions apply to comparable secular gatherings.” Kavanaugh doesn’t appeal to an idea of religious freedom. He argues only that “The state may not discriminate against religion.” He defines discrimination as treating religion differently than business.

No one argued for the church’s special place. No one protected its extensive freedom. The “free exercise” they recognized doesn’t provide a freedom beyond a social club’s or a lecture society’s. Roberts and Gorsuch could at least have furrowed their brow at the problem of religious freedom, even if they still argued as they did. But they didn’t. That question’s off the table.

What does it say about the nature of religion in America, and the future of religious practice in America, if the First Amendment doesn’t give it any special status? If “free exercise” means only the right everyone has to be treated alike? Losing our special status may prove very good for Christianity in America, but Christians must still think about it. Hard. And now, rather than later.

David would like to thank his friend Harold Fickett, for the observation about conscientious objection and the Little Sisters. Harold directs Scenes Media.

David Mills is a senior editor of The Stream. After teaching writing in a seminary, he has been editor of Touchstone and the executive editor of First Things. He edits the site Hour of Our Death and writes the monthly “Last Things” column for the New Oxford Review and a weekly column for the “Chapter House” section of The Catholic Herald. He is finishing a book on death and dying to be published by Sophia Institute Press.