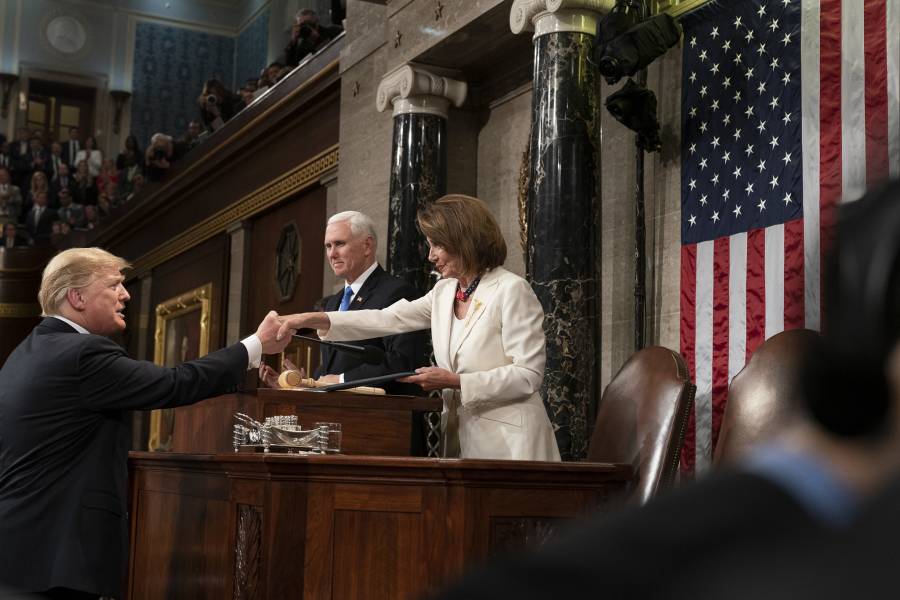 President Donald J. Trump delivers his State of the Union address at the U.S. Capitol, Tuesday, Feb. 5, 2019. Wanna give it a caption?

We’re hours from the State of the Union. One day before President Trump’s impeachment trial acquittal. One day after the hysterically botched Iowa Caucuses. A caucus where:

For young folks just becoming aware of the political world: Please know that things are not normally like this. Major news normally isn’t jammed together like clowns in a car. But such is the age of Trump. And Trump Derangement Syndrome.

And for this particular moment, before the next big moment, let’s preview tonight’s State of the Union.

Edge of the Seat Anticipation

Normally, State of the Union addresses rouse anticipation because of their pomp and ceremony and tradition. Like Uncle Sam dressing up for a formal dinner. But with Trump, the SOTU gives rise to drama. Suspense. Tension. Like Uncle Sam heading to the top of a monster roller coaster at Six Flags.

President Obama was in office for eight years. Do you remember anyone ever wondering, “Oh, my, what’s he going to say? What’s Congress going to do?!” Same with President George W. Bush. Any memorable moments? For that, you have to go back to President Clinton.

CNN recounts Clinton pollster Mark Penn’s remark before heading to Capitol Hill that night, “It’s very simple: If the speech is a hit he stays as president. If the speech is not a hit, he doesn’t.” Now that’s drama. That’s pressure. Clinton hit it out of the park.

A year later, Clinton delivered his SOTU amid his impeachment trial. He did not mention impeachment once in 78 minutes. (Or as Clinton would call 78 minutes, “a few brief remarks.)

But Clinton as a speaker was an R&B artist. He could improvise with the best, but would always stay in a groove. President Trump? He’s all rock-n-roll. Not even his band has a clue if he’s gonna stick with the set list. Or decide to stage dive in mid-song.

Look at White House press secretary Stephanie Grisham. When asked this morning whether Trump would bring up the impeachment, she said, “I don’t think so. I think that this has gone on for too long and I think that, if you look at the ratings, the American people, are frankly, bored of it. I don’t think people want to hear that.” She doesn’t “think” so? Can you imagine that Obama’s press secretary didn’t know precisely what Obama was going to say at a State of the Union?

In essence, Grisham’s saying, “Impeachment’s not in the prepared speech. But come showtime … ?” And that’s why people will tune in. Must tune in!

What will Trump say about impeachment? What will he say about the Iowa caucus kerfuffle? Will he make a grand bipartisan gesture? Or will he mock Adam Schiff? Will he say something outrageous that’ll get moderate GOP senators itchy about voting to acquit? (You can bet his lawyers Jay Sekulow and Patrick Philbin will be biting nails throughout.)

And how will the perpetually petulant wing of the Democrats act? What juvenile stunt will they pull? Will AOC come dressed as a character from Handmaiden’s Tale? Which Democrats will rush the aisle to shake Trump’s hand, then spit at whatever he says? Will the Congressional Black Caucus again sit on their hands and scowl when Trump touts black unemployment numbers and prison reform? (Remember that from 2018? They looked like they were watching Pat Boone cover James Brown.) Will Democratic Senator Kyrsten Sinema be tackled by colleagues if she again dares give Trump a standing O? What priceless Nancy Pelosi meme will go viral this year?

Now let me tell you what I would like to see tonight.

“I would first like to address the elephant in the room. Yes. I do know the difference between Kansas and Missouri.”

(He turns to Vice President Pence.) “Admit it, Mike. You were rehearsing a State of the Union just in case … . ”

“Honestly, I don’t know what takes longer: me reading this administration’s accomplishments or Democrats figuring out who won in Iowa.”

“House Democrats … I forgive you.”

Lines That Would Be Funny, But He Shouldn’t Use

“Thanks for the idea, Congressman Schiff. I just did sell Alaska back to the Russians. And boy, did I make a mint.”

“Yes, I didn’t invite CNN to the annual pre-speech luncheon. Wanted to make sure Brian Stelter didn’t eat all the grub.”

“Another goal for this year … coming up with a nickname for every single person in this room.”

“So as I was telling John Bolton about Ukraine this morning… ”

“Here’s an idea.” (pulls out his cellphone) “Why don’t we all call President Zelensky and say ‘Hi!'”