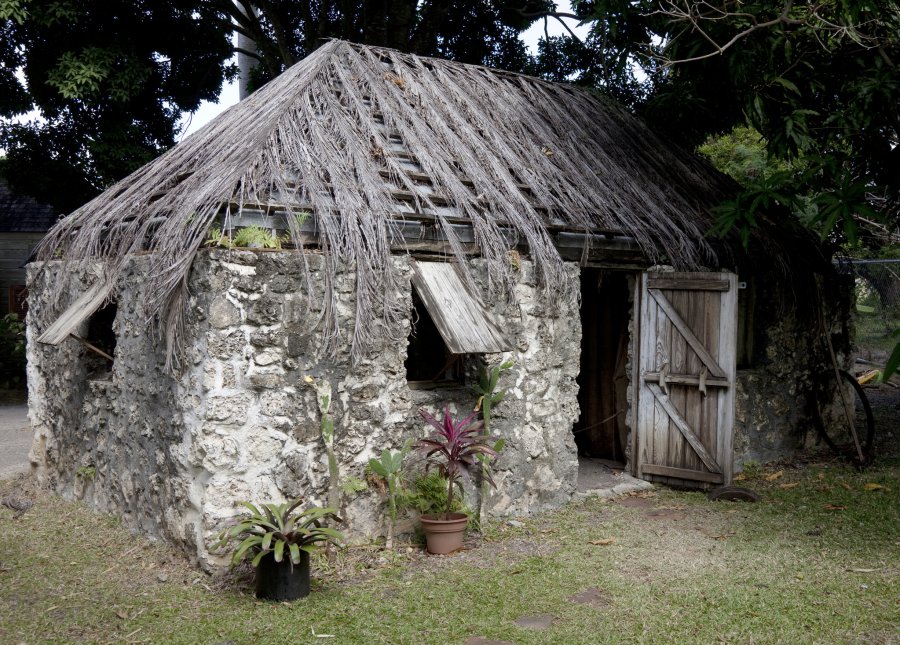 A slave house in Barbados.

It was published for slaves by people allied to slave owners, and you can guess what kind of things the “Slave Bible” of 1809 kept in and kept out. The cover page describes the book as “Parts of the Bible, Selected for the use of the Negro Slaves of the British West-India Islands.” Parts. Just parts. Because some parts of Scripture the editors didn’t want slaves hearing.

It’s the subject of a new special exhibit at the Museum of the Bible in Washington, D.C. (You can find a scan of the book here.) As far as I can find, it was published by the Incorporated Society for the Conversion and Religious Instruction and Education of the Negro Slaves in the British West India Islands. This ministry (here’s their report from 1825) included abolitionists, though many of the ministers they employed owned slaves.

The editors of the Slave Bible knew they had to neuter Scripture the way a farmer neuters a bull: to make it easier to handle.

In fact, their patron in 1809 when the Slave Bible appeared was the Anglican bishop of London, who had been one of the earliest abolitionists. He worked closely with William Wilberforce. The slaves “are considered as mere machines and instruments to work with, as having neither understandings to be cultivated nor souls to be saved,” Beilby Porteus preached in 1787, when support for abolition was still a very eccentric position to take. The rest of the sermon, which is well worth reading, rejects the system by which so many were enslaved and degraded.

Porteus was one of the good guys. Yet even he presided over a society that produced a cut-and-pasted Bible, designed to give slaves only part of the Good News: the part their owners wanted them to hear. That doesn’t speak well of the editors, but it does testify to the power of Scripture. They felt they had to neuter Scripture the way a farmer neuters a bull: to make it easier to handle.

The Slave Bible leaves out 90% of the Old Testament, including every single psalm. The Bible’s prayer book must have included too much about God delivering his people from their oppressors. It leaves out half the New Testament. That includes the book of Revelation, with all its talk about a new heavens and new earth. And Philemon, of course, because Paul begs Philemon’s owner to give him his freedom. Its editors deleted almost everything that might imply a judgment on slavery or a promise of freedom in this world.

Take its selection from Exodus. It ignores God’s delivering the Israelites from slavery in Egypt. It leaves out the event that gives the book its name. The gall! as my grandmother would say.

Its version of Exodus begins with chapter 19, when the Israelites enter Sinai. No brutal slavery, no tyrannical pharaoh, no plagues visited upon the oppressor, no Divine Passover striking the slave-owners and sparing the slaves, no crossing the Red Sea, no Divine destruction of pharaoh’s army. All missing. The selection ends with the last verse of chapter 20 after the giving of the Ten Commandments.

What does this Bible teach? Law, not liberation.

Take the Slave Bible’s longer selection from Deuteronomy. Its begins with chapter 4, which it titles “An exhortation to obedience.” Chapter 6 it titles “The end of the law is obedience.” It skips chapter 7. In that chapter, God tells the Israelites to destroy the peoples of the land He is giving them. He declares: “Thou shalt not be afraid of them: but shalt well remember what the Lord thy God did unto Pharaoh, and unto all Egypt.” So that chapter had to go.

What does the Bible teach? Obedience, not freedom.

What It Doesn’t Teach

And what does it not teach? The owner’s responsibility for his slaves and servants. It includes Paul telling “servants [to] be obedient to them that are your masters.” It leaves out his telling the Galatian Christians “There is neither bond nor free … for ye are all one in Christ Jesus.”

And here are two more verses the editors of the Slave Bible left out: “He that stealeth a man, and selleth him, or if he be found in his hand, he shall surely be put to death” (Exodus 21:16). And “Woe unto him that buildeth his house by unrighteousness, and his chambers by wrong; that useth his neighbour’s service without wages and giveth him not for his work” (Jeremiah 22:13).

So they created a Bible for them. But they did not give the slaves the full Word of God. They did not share with them the whole revelation God has given his people. It’s a warning to us, who could easily do the same thing. It’s also a lesson.

A note of credit: the second sentence of the seventh paragraph (“No brutal slavery,” etc.) is based on one written by Joanne McPortland in commenting on the story when I posted it on Facebook. I hadn’t seen the matter so clearly as she did. You read her on her weblog Egregious Twaddle.