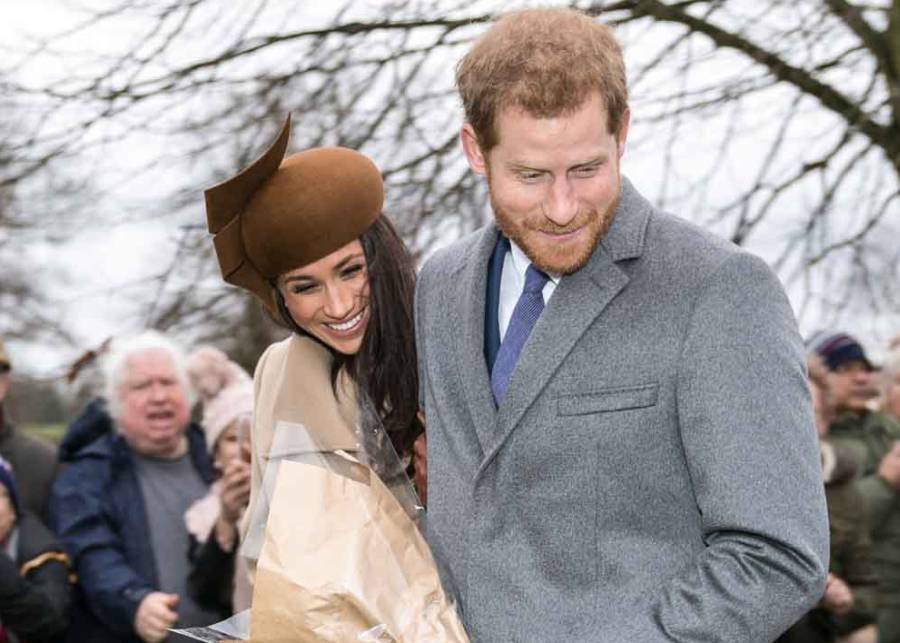 The second greatest thing about winning the Revolutionary War is we can watch the British royals the way we watch Downton Abbey or Monty Python. Just for the drama and laughs.

And what’s going on now is like watching a live, real-time season of The Crown.

Today, the royal family gathered at the Queen’s Sandringham Estate for a summit to discuss what to do about the Duke and Duchess of Sussex, aka Harry and Meghan. Last week, in defiance of the Queen, the couple released a statement saying they want to shed their “senior royal” status. They want to go their own way (sort of). They want to hang out in North America. (By setting up life in Tinseltown, allegedly, once Trump is out of office.) The Brits call the bombshell abandonment of the royal family “Megxit.”

For those hoping today’s meeting would end with Meghan sent to the Tower of London, sorry to disappoint. The Queen has just issued a statement of support … however qualified. She’s agreeing to a “period of transition” and is “entirely supportive.” But “complex matters” are left to resolve.

“Today my family had very constructive discussions on the future of my grandson and his family,” Elizabeth wrote.

My family and I are entirely supportive of Harry and Meghan’s desire to create a new life as a young family. Although we would have preferred them to remain full-time working Members of the Royal Family, we respect and understand their wish to live a more independent life as a family while remaining a valued part of my family.

Harry and Meghan have made clear that they do not want to be reliant on public funds in their new lives.

It has therefore been agreed that there will be a period of transition in which the Sussexes will spend time in Canada and the UK.

These are complex matters for my family to resolve, and there is some more work to be done, but I have asked for final decisions to be reached in the coming days.

Gee, Why Would the Family Have Been Concerned?

Earlier Monday, Prince Harry and Prince William released a joint statement blasting a London Times article which put responsibility for the split on William “bullying” his younger brother over Meghan. The Times wrote: “The Duke and Duchess of Sussex regard themselves as having been pushed away from the royal family by the ‘bullying’ attitude of his brother, the Duke of Cambridge.”

Not so, say the brothers.

A joint statement from the spokespeople of Prince William and Prince Harry: pic.twitter.com/H8hqYCHirK

The Times wrote: “According to repeated reports, Harry felt that William was insufficiently welcoming towards Meghan when they first started dating. Their relationship has apparently not recovered.”

The brothers deny a serious rift. And many of us can relate. Raise your hand if you once brought someone new home to meet the family and didn’t immediately feel the love? This case does have an interesting historical twist though.

Why would the Future King of England originally greet Meghan with less than open arms? Be a little bit wary at first. Doesn’t Harry know what happened the last time a British royal decided an American divorcee was the ticket to marital bliss? Didn’t Harry see season one of The Crown? Or The King’s Speech? Spend five seconds looking at the family tree? Nothing against American divorcees in general, but you’d think the whole Wallis Simpson business would have scared Windsor males to death at least for a century.

Queen Elizabeth reportedly blames Edward VIII’s abdication for her father’s early death. No doubt she recalled well the turmoil the Wallis Simpson affair caused the realm, took one look at Meghan and went, “On the plus side, darling, I’m fairly confident she’s not a German spy.”

Avoiding a Repeat of History, or Seeking the Spotlight on Her Own Terms?

I could see why Markle would have trouble adjusting to being a royal. It’s tough being subjected to The Firm, as the Brits call the strict, regimented royal operation.

And the British tabloids? Vermin. If I’m Harry, I remember how miserable my mother was, I’d know about the suicide attempts, and I certainly would know how the British press literally hounded Diana to death. I don’t want that for my wife. He said as much a few months ago: “I lost my mother and now I watch my wife falling victim to the same powerful forces.” Her death still haunts. We get it.

Unfortunately, I suspect this is at least as much about them wanting to be American-style celebrities. Keep the perks of fame and royalty, but not the heavy burden. Or at least Meghan wants the role. (She wasted no time signing a deal with Disney.)

If Harry really wanted to earn his own keep and keep Meghan away from the British tabloids that killed his mom, he’s got options. He could re-up with the military, get himself assigned to NATO or some base out in the boonies where she could come along. Heck, Queen Elizabeth before becoming queen spent time as a normal military wife. Meghan can fly low under the radar there, doing charity work, and even produce movies, without being chased by paparazzi.

Seems if it wasn’t about celebrity, if it wasn’t about her, they could have quietly created an “independent” life. They’d be well into splitting their time between Britain and Canada before anyone caught on. And if anybody asked, Harry’d say, “Adjusting to royal life takes time. The fishbowl in England was proving unhealthy to my wife. It killed my mother. In the long run, this is the best way we’ll both able to serve the British people. And in the meantime, whenever the Queen needs us, we’re there.” And maybe that’s where his heart is.

However, instead of a quiet move, they released a loud statement. Blew their desires up into international news. Screamed to the world, “Hey Everybody! We’re ditching the Royal Family! And open for business.” And all just one day before a big birthday bash for the Duchess of Cambridge, Kate Middleton. Deliberately upstaging Prince Williams’ wife. (After being a leading lady on TV and film, perhaps Meghan doesn’t like being thrust into a supporting role?)

It’s no wonder Madame Tussaud’s Wax Museum immediately shoved the figures of Harry and Meghan out of the display of the royals.

The timing of the semi-abdication doesn’t sit well.

Especially pulling away now. Defying his Queen — who asked that the statement not be released until details could be worked out. Abandoning his grandmother — in a season of turmoil.

Elizabeth is 93 years old. She really doesn’t need this. This isn’t the time to be high-tailing it to Hollywood. Your grandmother, your family, needs you … needs you both … far more than Tinseltown does.

Finally, a word to Meghan: Even if you do want to still have the acting fame … the British entertainment industry is much kinder to actresses as they age. Just saying. Meanwhile, I know a lot of readers who’d love to pull you aside for a minute, “You think you have problems with your in-laws?”

The grass is always greener on the other side of the castle wall.

Meanwhile, here’s hoping the family will heal. And the royals will find be back together … if not for every holiday, at least at Madame Tussaud’s.

Al Perrotta is the Managing Editor of The Stream and former VP/Creative Director of All Comedy Radio. You can follow him at @StreamingAl. And if you aren’t already, please follow The Stream at @Streamdotorg.