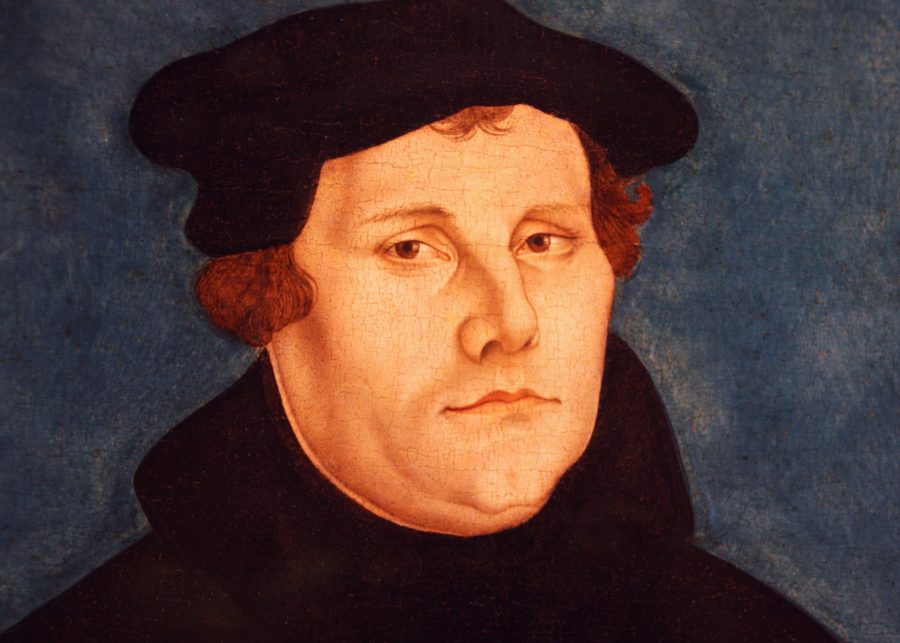 When Martin Luther’s justified protest against the worldiness, corruption, and mechanistic legalism of the Renaissance church quickly radicalized into a de-sacramentalized and priestless Christianity, the predictable happened. Both Luther and his opponents turned to the power of the State to support their religious views.

Catholic bishops in Germany leaned on the Holy Roman Emperor, Charles V, to prosecute Luther for heresy. German nobles who resented papal taxes and approved of Luther’s views offered him protection. Charles himself was eager to find some split-the-difference theological compromise, to keep peace in his ramshackle empire.

After Luther was condemned at the Diet (congress) of Worms, Protestant nobles spirited him away to safety. Dukes, barons, and other local leaders encouraged Luther-inspired reforms, which just happened (by sheer coincidence) to strip bishops and monasteries of vast, valuable estates. (Pious folk wishing for prayers after their death had been leaving lands to the church for centuries, till religious institutions owned some one-third of the land in Europe.)

On several occasions, promising compromises that might have healed the breach in the church smashed on the rocks of property disputes: Catholic bishops demanded that the secular lords return the lands they’d seized, and they refused.

Land Grabs by the Government

In Scandinavia and the estates of the Teutonic Knights, secular rulers saw Luther’s ideas as the pretexts for massive landgrabs, and the total domestication of the once-independent church under royal control. The same thing happened in England under King Henry VIII, after his failed annulment case drove that once-convinced Catholic to reject papal authority.

In countries where the monarchs remained in communion with Rome, the church lost its previous freedom of action and independent influence. The pope found that his threats of excommunication frightened no one, and he had to tread lightly with monarchs in France and Spain, lest they decide to pull a Henry VIII themselves. So Catholic monarchs gained control over who got appointed bishop, and the right to veto or censor even official church documents. (The reforming Council of Trent would not see its documents published in Spain for many decades, since the King didn’t approve of them.)

If Reformation, Why Not Revolution?

Luther’s radical challenge to the practices and preaching of 1,000 years proved to be a political catalyst, too. If the hierarchy of the church itself could be challenged, why not that of the state? Of society and the economy? If the claims of the pope and bishop were not sanctified by God, what about the claims of feudal lords to take large portions of the crops grown by their serfs? A massive social revolt began in the fragmented, religiously divided Germany, with peasants expropriating their overlords by violent force.

Luther was horrified by what his revolt had unleashed, and sided with the barons, denouncing the social revolutionaries who’d cited his example. He called on local lords to utterly crush the revolt, and adopted a theology that was essentially quietist on politics. God had appointed the rulers of the secular realm to keep order, and rebellion against such leaders was sinful in itself.

Nobody Believed in Religious Freedom

Both Lutherans and Catholics strove to win over secular rulers, to wield the sword of the State to impose their religious programs on all their fellow citizens. In no part of Europe did anyone advocate the kind of personal and corporate religious liberty we now take for granted. No religious leader, Catholic or Protestant, would argue for such a solution for many decades. Religious orthodoxy was seen as one of the social goods the government was meant by God to ensure, and religious dissent was invariably linked to efforts to overturn the regime.

This isn’t the place to rehearse the enormously complex and murderous Thirty Years War, which saw Catholic France join the Protestant powers in Europe to oppose the Habsburg monarchy, in control of much of Germany, of Spain and Portugal — and those two kingdoms’ massive New World empires. Because the combatants believed that they were fighting for eternal truths on which the salvation of millions depended, the war was fought with unparalleled ruthlessness. Entire cities burned, as conquering armies put “heretics” to the sword, be they civilian or soldier.

The resolution of that war satisfied no one, but established a kind of peace. The prince of any polity, large or small, would determine the religion that prevailed there. Those who disagreed must submit or emigrate. Political power thus reigned completely supreme over a church which lost almost all the institutional power and independence it had wielded since the western Roman empire collapsed.

There were, however, two movements that dissented from the consensus. They suggested that citizens had the right to rebel against governments that suppressed their religious faith. And it’s from these two movements that we can trace the first glimmers of religious liberty such as we know it today. In one of history’s ironies, these movements were mortal enemies: the Calvinists and the Jesuits. In my next installment of this series, I will explain how these opposing forces both came to advocate religious resistance.

Who Were the Persecutors During the Reformation? Here’s the Bad News: Everybody