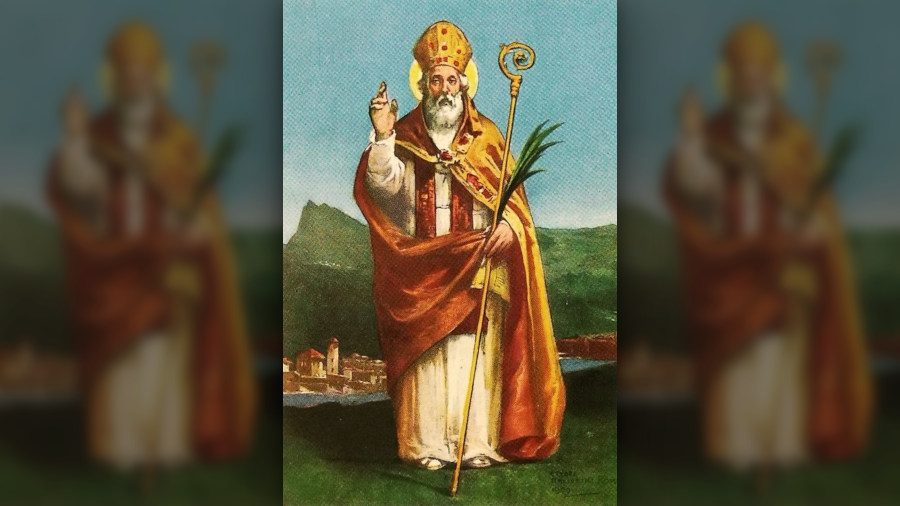 By Dwight Longenecker Published on February 14, 2020 •

I was out shopping earlier this week, and because I was dressed as a priest, the woman at the cash register asked “Where does all this Saint Valentine stuff come from anyway?”

There was a line of other customers behind me waiting to buy cards, chocolates and flowers for their loved ones so I said, “Do you want the long version or the short version?”

She laughed “I guess the short version.”

“OK. Saint Valentine was a Catholic priest from Italy in the third century. Young men who were married could avoid military conscription into the Roman army, but because there was a shortage of soldiers, they were barred from marriage until they had served in the military first. Valentine married the young men to their brides anyway and for that act of defiance he lost his head.

“In fact, if you’re ever in Rome you can go to the church of St Mary Cosmedin — that’s the one where Audrey Hepburn and Gregory Peck visited in Roman Holiday — and see his skull. It’s still there with flowers on it.”

Valentine married the young men to their brides anyway and for that act of defiance he lost his head.

The guy behind me coughed impatiently, so I paid up and wished her a happy Valentine’s Day.

As usual with ancient history, though, it’s not quite as easy as that. It seems that there were actually three saints from the early church named Valentine. The first was the priest from Rome who married young couples. The second was a bishop from Terni in Italy, and the third a virtually unknown martyr from North Africa.

So which is the real St. Valentine? As J.R.R.Tolkien’s character Galadriel in Lord of the Rings says, “History became legend and legend became myth.”

Many legends developed around the martyrs of the early church. One of the stories about St. Valentine was that during his imprisonment for being a Christian, he witnessed to the judge. The judge presented Valentine with his daughter, who was blind, and demanded that Valentine heal her to prove what he said about Jesus Christ. Valentine did heal her in the power of Jesus’ name. The judge was converted and set Valentine free. Valentine continued to preach the gospel and was arrested again.

This time he went to the Emperor Claudius in Rome, where he began to support the Christians — marrying young couples against the wishes of the authorities. To remind the couples of the vow they had made to Christ and to one another, he cut hearts from pieces of parchment and gave them to the young men. Thus, as the story goes, began the tradition of sending Valentine cards.

Christian Roots of the Modern World

Like so many celebrations that have become secular, Valentine’s Day has its roots deep in our shared Christian history. Behind all the candy, flowers, romance and red hearts is the depth of Christian love and commitment.

Human love is a reflection of God’s love. Therefore our celebration of love is a celebration of much more than hearts and flowers. The great philosopher Thomas Aquinas said love was the energy force that binds together the Father, Son and Holy Spirit. In other words, love originates from the very heart of God Himself who, John tells us, IS love.

“For I am convinced that neither death nor life, neither angels nor demons, neither the present nor the future, nor any powers, neither height nor depth, nor anything else in all creation, will be able to separate us from the love of God that is in Christ Jesus our Lord.”

Valentine died for that love. He lived and proclaimed the good news of God’s love just over two hundred years after the death and resurrection of Jesus. He did so in Rome — the very city that had killed Jesus’ disciples Peter and Paul two hundred years before.

Nothing Can Separate Us From the Love of God

Valentine was part of that great Roman church to whom Paul wrote his epistle greeting the Christians with the words, “To all in Rome who are loved by God and called to be his holy people: Grace and peace to you from God our Father and from the Lord Jesus Christ.”

Saint Valentine would have known and loved those words. As he went to his heroic death, those other words of Paul to the Romans would have echoed in his heart and mind:

“For I am convinced that neither death nor life, neither angels nor demons, neither the present nor the future, nor any powers, neither height nor depth, nor anything else in all creation, will be able to separate us from the love of God that is in Christ Jesus our Lord.”

‘I Can’t Live Without Him!’ She Meant Her Cat. She Really Meant Jesus.