The Queen is Dead. Long Live the King 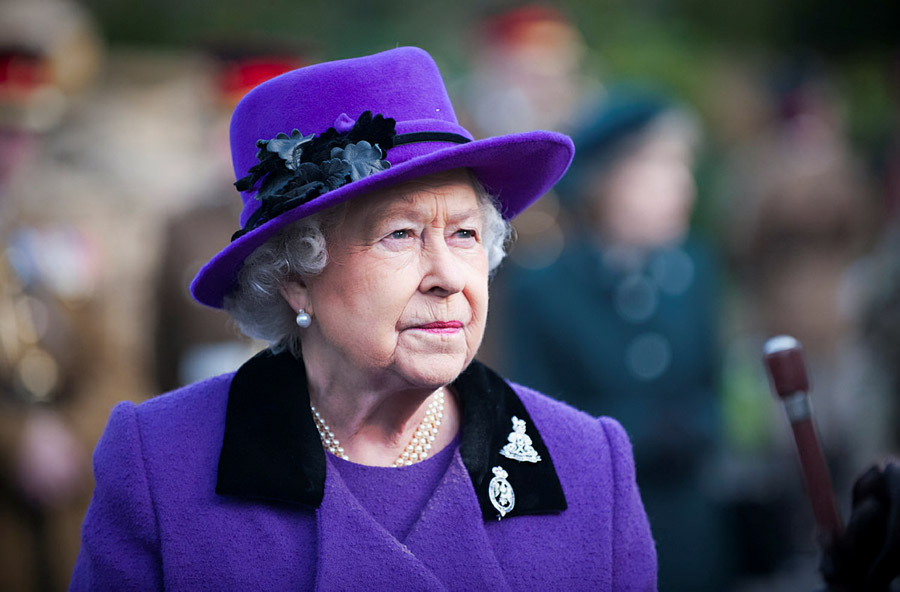 The end of the Second Elizabethan Age is upon us.

Queen Elizabeth II, the world’s longest reigning monarch, has died. She was 96. The Queen passed away peacefully at her Balmoral Estate in Scotland surrounded by her family. Upon her death, her son Charles became King Charles III.

And a double rainbow emerged over Buckingham Palace.

Just two days ago, a smiling Elizabeth welcomed new Prime Minister Liz Truss to officially task her with forming a new government. It would be her final official duty, active to the end.

Today Truss paid tribute, “Queen Elizabeth II was the rock on which modern Britain was built. She was the great spirit of England, and that spirit will endure.”

Elizabeth was a mere 25 years old when she assumed the throne upon the death of her father King George VI in 1952. She held the throne for 70 years, becoming Britain’s longest reigning monarch in history. She was the steady rock England looked to in times of turmoil. Even during World War II, as a princess, she served her nation as a mechanic and driver.

Reaction From Around the World

King Charles III released a statement upon his mother’s death.

“The death of my beloved Mother, Her Majesty The Queen, is a moment of the greatest sadness for me and all members of my family.

“We mourn profoundly the passing of a cherished sovereign and a much-loved mother.

“I know her loss will be deeply felt throughout the country, the Realms and the Commonwealth and by countless people around the world.

“During this period of mourning and change, my family and I will be comforted and sustained by our knowledge of the respect and deep affection in which the Queen was so widely held.

The White House released a long statement, saying, “Her legacy will loom large in the pages of British history, and in the story of our world.” 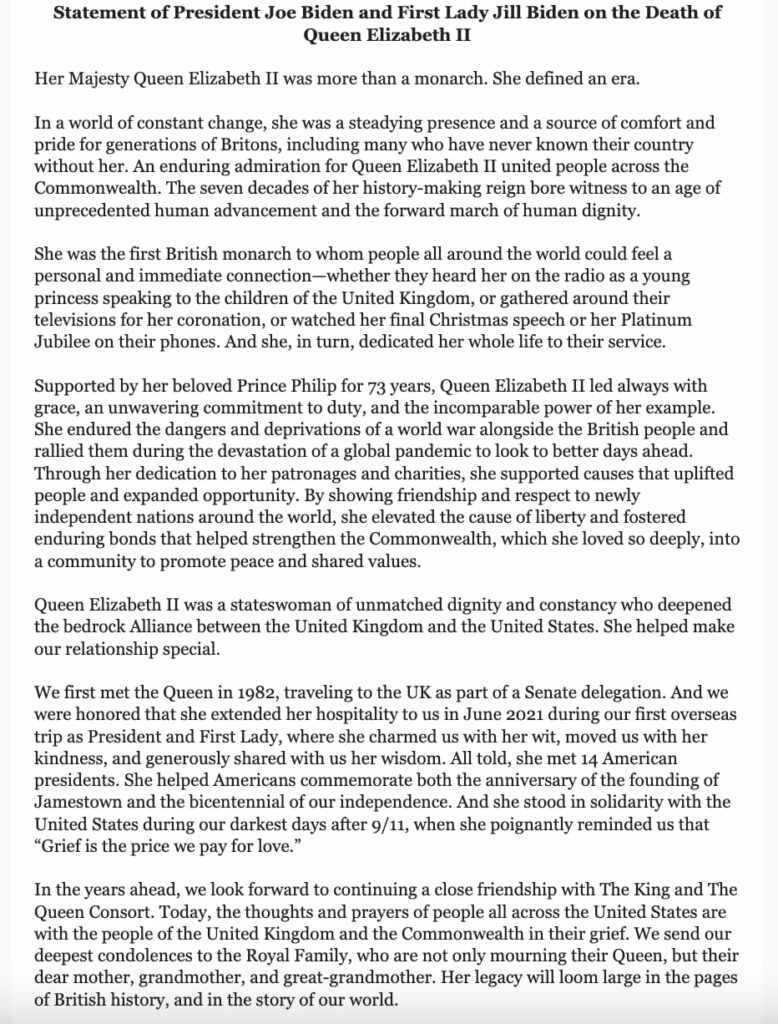 President Trump expressed his sorrow on Truth Social, saying he and Melania were “deeply saddened” at the Queen’s passing.

Queen Elizabeth’s historic and remarkable reign left a tremendous legacy of peace and prosperity for Great Britain. Her leadership and enduring diplomacy secured and advanced alliances with the United States and countries. …around the world. However, she will always be remembered for her faithfulness to her country and her unwavering devotion to her fellow countrymen and women. Melania and I will always cherish our time together with the Queen, and never forget Her Majesty’s generous friendship, great wisdom, and wonderful sense of humor. What a grand and beautiful lady she was—there was nobody like her!…

The Mayor of Paris has announced that the Eiffel Tower will go dark tonight in her honor.

Our Prayers for England

Brits under the age of 70 have known no other monarch. Our heart aches for the anxiety and grief that must be overwhelming the British people. How unsettling this must be. Especially with England facing an energy crisis this winter, the nation’s already on edge.

She was the embodiment of England. A living symbol of the United Kingdom. We have nothing close to compare. Perhaps if the Statue of Liberty was alive and part of our entire lives, and suddenly we were faced with her being taken away, we’d be somewhere close. Perhaps.

The loss of British royalty and the coronation of a new king or queen is always a big deal. The pomp alone is worth the price of admission. But consider how Great Britain saw four monarchs in a span of fifteen years from the late ‘30s to early ‘50s. A vast majority of Brits have never ever gone through it.

And now they must. And we walk with them in their mourning.

We also pray in these hours for the new King Charles. Charles has spent his whole life understanding and preparing for the burden that comes with being king. But with the reality staring him in the face after so many decades, what emotions must be churning, doubled by the awful experience of losing his mother. As if that were not wretched enough.

Top that off with the knowledge Queen Elizabeth II is an impossible act to follow. And knowing a good chunk of the British people would be perfectly happy to skip over Charles and go straight to young Prince William.

We pray for the King.

We also pray for Prince Harry. Yes, we pray God’s comfort on a man facing the loss of his beloved grandmother. But we also pray for Harry because, we fear, he will need it. Harry has pulled himself away from the royal family … from England … on behalf of his wife Meghan Markle. He has spent the Queen’s twilight years thousands and thousands of miles away from her. How much is he going to regret not staying close? How much will that eat at him now that his grandmother was taken?

How bitter will he become at his wife for pulling him away from his homeland, his grandmother, his Queen … heck, as a military man, his chief commanding officer? Oh, maybe he won’t want to become bitter at her. He willingly left. But it’s going to take prayer and intercession to stop that demon seed from planting in his heart.

So perhaps we should pray that though she didn’t seem able to bring reconciliation in the her family during her life, may reconciliation come in the wake of her death. We pray for healing. For the royal family.

Elizabeth will lie in state, with a funeral at Westminster Abby expected in around ten days. The ceremony and spectacle will be like nothing most of us have seen in our lives. The funeral of a British monarch.

A 21-year-old Princess Elizabeth told the British people, “I declare before you all that my whole life, whether it be long or short, shall be devoted to your service.”

Hers was a very long life. And no question, Queen Elizabeth kept her promise.

May she rest in peace.

Praying for the Queen and the People of England