The Power of Prayer: Bills Safety is Awake, And Has Shown ‘Significant Improvement’

Damar Hamlin suffered a cardiac arrest on the field during the game with Cincinnati Bengals Monday night. Now he's recovered enough to wonder who won. 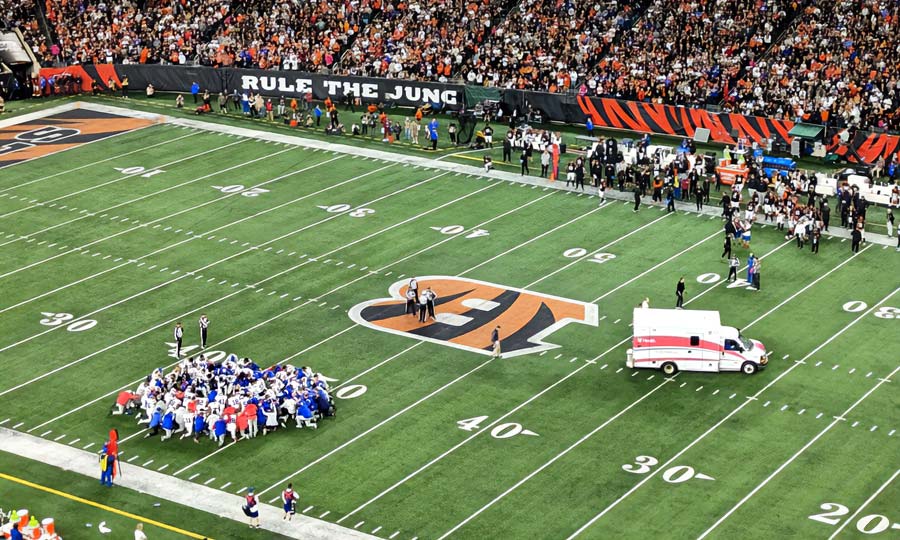 Buffalo Bills Safety Damar Hamlin is removed from Paycor Stadium in Cincinnati, Ohio, in an ambulance on Jan. 2, 2023. The Buffalo Bills, in white, kneel at the bottom left of the image.

Damar Hamlin is awake, communicating, and wants to know who won Monday night’s game between his Buffalo Bills and Cincinnati Bengals. Praise God.

Hamlin, safety for the Bills, collapsed on the field with a cardiac arrest during the game with the Cincinnati Bengals. Since then, people all over the world have been praying for his recovery even as he remains in critical condition at the University of Cincinnati Medical Center ICU.

Damar’s father, Mario Hamlin, spoke with the Bills via zoom Wednesday. ESPN reported that Mario said that Damar was “making progress,” to the team’s great relief.

Damar is awake and “holding hands with his family” CNN reported.

The news was even better Thursday. Damar’s medical team announced during a press conference that Hamlin has shown “substantial improvement.” Hamlin is still on a ventilator and unable to speak, but is able to write using paper and pencil, one of his doctors said.

The doctors credited the quick medical response for his intact neurological state.

Still, so many people have been praying for Damar to return to health quickly. An ESPN analyst even prayed on the air, prompting some Twitter users to call him “brave.” As The Stream‘s Al Perrotta said, Damar’s cardiac arrest seems to be uniting people in prayer — and that’s a good thing.

Damar Hamlin still has a “ways to go,” Dr. William Knight, director of emergency medicine, said in the conference. “We want to see him continue to breathe more on his own, and we want to get him breathing completely on his own. That will be the next big milestone for him.”

Please continue to pray for Damar — that he makes that milestone and heals completely.

As sportswriter for Faith on the Field Rob Maaddi tweeted, “Thoughts are nice. Vibes are cool. PRAYER is POWERFUL.”

Thoughts are nice. Vibes are cool. PRAYER is POWERFUL. 🙏 pic.twitter.com/auUPgPdcpE