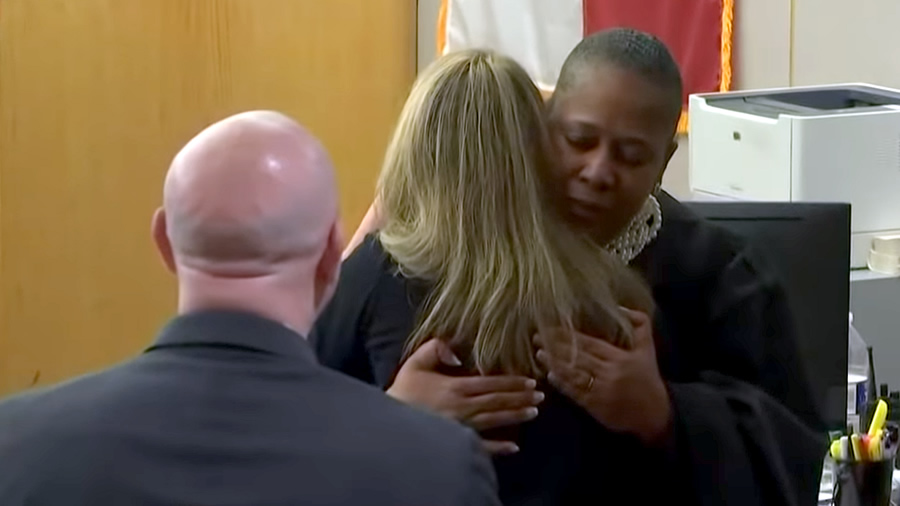 In this screengrab from video, Judge Tammy Kemp hugs Amber Guyger after her sentencing.

An atheist group has filed a complaint against a judge in Dallas who supposedly violated their understanding of church and state relations.

The black judge (Tammy Kemp) presided over the racially-charged trial of the white ex-police officer (Amber Guyger) who was sentenced last week to prison for ten years because she shot and killed an innocent black man (Botham Jean). Guyger thought Jean had broken into her apartment. It turns out she mistakenly was in his apartment.

The victim’s brother (Brandt Jean) publicly and emotionally forgave Guyger in court because of the love of Jesus, which he said he hopes the ex-police officer will find. Judge Kemp gave Guyger a Bible and read to her John 3:16: “For God so loved the world … .” And for that, the Freedom From Religion Foundation wants to throw the book, so to speak, at the judge.

Others on the left have also thrown a fit against the judge — and even against the victim’s brother — for offering forgiveness. But forgiveness is a great healer, cutting even through the racial barriers that so divide us.

Every day, as a spiritual discipline, I review in my mind a list of Scriptural truths, including: “God has forgiven me. I forgive others. I walk in forgiveness.”

Yet thoughts of revenge come naturally to us — so naturally that they’re even a point of humor:

All humor aside, in His classic Sermon on the Mount (Matthew 5-7), Jesus taught His followers to pray using what we call “the Lord’s Prayer,” or the “Our Father.” Many churches, including mine, use this prayer week after week.

Forgiving others isn’t just good spiritual living. The late Lewis Smedes of Fuller Theological Seminary once said, “To forgive is to set a prisoner free and discover the prisoner was you.”

The forgiveness of sins by God is based on the fact that Jesus died on behalf of sinners. Those who believe in Him are forgiven and receive eternal life.

Forgiving others isn’t just good spiritual living. The late Lewis Smedes of Fuller Theological Seminary once said, “To forgive is to set a prisoner free and discover the prisoner was you.” His 1984 book, Forgive and Forget, according to Psychology Today “has been credited as the catalyst for modern forgiveness research.”

A study reported in the UK Telegraph compared the difference between those who forgive as opposed to these who hold a grudge. Forgiving is better for your mental and physical health than is “grudge-holding.”

Georgia psychotherapist, Angela Buttimer observes, “When we hold onto grudges and resentment, it’s like drinking poison and expecting the other person to get sick.”

I find all this fascinating because I maintain that the Bible beat modern psychology by 2000 years when it comes to the importance of forgiving, of letting it go.

The Keys for Optimum Mental Health

There is a fantastic quote in an old book by two psychiatrists. In 1951, J.T. Fisher and L.S. Hawley, wrote A Few Buttons Missing, in which they praised the good psychological principles taught by Jesus in the Sermon on the Mount.

If you were to take the sum total of all authoritative articles ever written by the most qualified of psychologists and psychiatrists on the subject of mental hygiene—if you were to combine them and refine them and cleave out the excess verbiage—if you were to take the whole of the meat and none of the parsley, and if you were to have these unadulterated bits of pure scientific knowledge concisely expressed by the most capable of living poets, you would have an awkward and incomplete summation of the sermon on the mount. And it would suffer immeasurably through comparison.

And they add, “For nearly two thousand years, the Christian world has been holding in its hands the complete answer to its restless and fruitless yearnings. Here … rests the blueprints for successful human life with optimum mental health and contentment.”

And, of course, included in that blueprint is to experience God’s forgiveness and in turn to forgive others. The brother of the shooting victim and the judge are showing far more healthy behavior than their detractors are.

The Lie of Yesterday