The Painful Faith of Vin Scully 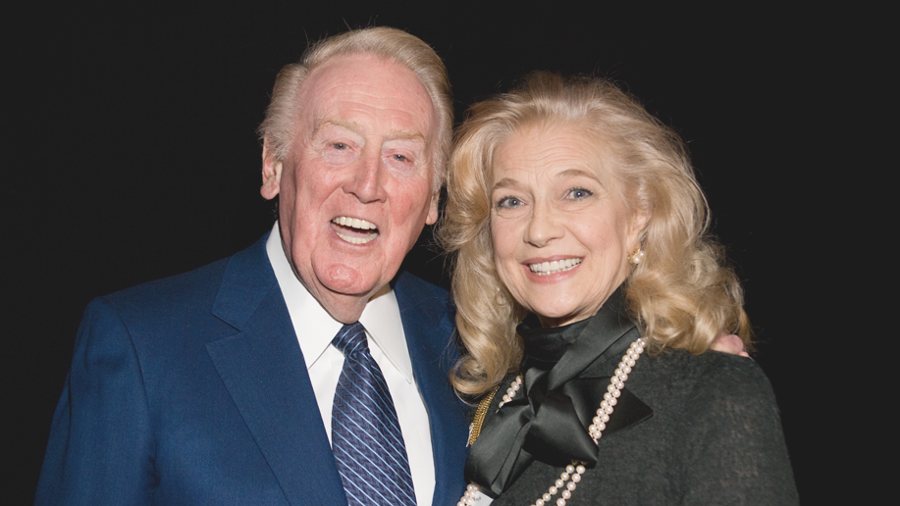 To the average observer, Vin Scully lived a charmed life. The iconic sportscaster, who died Aug. 2 at 94, had fame, fortune, immense respect and sincere affection from — and for — the multitudes.

Yet underneath all that success lay the pain of devastating personal loss, a pain that his faith allowed him to navigate.

A lifelong and devout Catholic, Scully regularly attended Sunday Mass organized by Catholic Athletes for Christ at the ballpark during the season, both at home and on the road. Scully even recorded the Rosary for the organization.

Yet the true measure of faith lies not in ritual participation nor occasional contributions. It lies in the impact faith makes on the warp and woof of life, especially among the threads we dare not reveal to others.

From Pain to Perspective

As a 5 year old, Scully experienced the death of his father. In the midst of his career in 1972, Scully’s first wife, Joan, died at 35 from an accidental medical overdose. In 1993, broadcasting partner Don Drysdale, who spent his entire Hall-of-Fame pitching career with the Dodgers in both Brooklyn and Los Angeles, died in the middle of the season from a heart attack.

Yet the true measure of faith lies not in ritual participation nor occasional contributions. It lies in the impact faith makes on the warp and woof of life, especially among the threads we dare not reveal to others.

“When my wife Joan died, I was devastated, as were our children,” Scully said. “We didn’t stop praying, though. The worst thing you can do in times of trial is to stop praying. The tough moments are when you need God the most. He’s always there and more than happy to give us his help; we need only ask for it.”

“Thank God, my faith has always kept things in perspective. Completely. It has not wavered. Faith is the one thing that makes it work, makes me keep going.”

Scully’s faith not only enabled him to retain his confidence in God. It helped him develop a realistic attitude about death.

“Being Irish, being Catholic, from the first day I can remember, I was told about death,” Scully said. “Death is a constant companion in our religion. You live with it easily; it is not a morbid thought.”

“That has given me the perspective that whatever I have can disappear in 30 seconds. And being out on the road as much as I am, I realize I am killing the most precious thing I have, time. You never know how much of it you have left.”

Scully eloquently described that perspective in 1982, when he spoke at his induction into the Baseball Hall of Fame.

“I guess a vital portion of the human existence is when man is visited with misfortune,” he began. “He will invariably look his eyes to the heavens and say, ‘Why me? Why, with the millions and millions of people in this world, am I asked to carry a cross?’”

“And yet if I’m to be honest with you and with myself today, I have to ask the same question when good fortune comes my way: ‘Why me? Why, with the millions and millions of more deserving people, would a red-haired kid with a hole in his pants and his shirttail hanging out, playing stickball in the streets of New York, wind up in Cooperstown? Why me, indeed?’”

From Perspective to Kindness

Despite personal tragedy, Scully never inflicted his pain on others. Indeed, he did precisely the opposite.

“Vin may be the kindest person I’ve ever known,” said Ross Porter, who worked with Scully from 1977-2004. “In all the years we were together, not once did I see him rude to another human being — and there were plenty of opportunities for him to be upset by pushy fans who wanted an autograph, a photo, or a lengthy, dull conversation, sometimes within a few minutes of going on the air.”

Yasiel Puig was a talented yet temperamental outfielder who defected from Cuba and played for the Dodgers from 2013-18. Puig brought a powerful bat and a more powerful throwing arm. Fans were so impressed that they voted him to the National League’s starting lineup for the 2014 All-Star Game.

But Puig also brought a lack of discipline. He disregarded fundamentals or punctuality. Anonymous teammates criticized him to reporters. The Dodgers became so tired of his behavior that they sent him to the minor leagues in 2016, then traded him in December 2018. Since leaving the Dodgers, Puig has played for four teams in four seasons, including two overseas, and now plays in South Korea.

Scully noticed the unbridled potential and called Puig the “wild horse.” But the sportscaster did more than provide a nickname. He treated Puig as if the outfielder were his own son. A video tribute to Scully in the Dodgers’ first home game after his death included shots of him smiling with unrestrained joy as he and Puig hugged.

“You gave me my Wild Horse name,” he tweeted. “You gave me love. You hugged me like a father. I will never forget you, my heart is broken. My hand (is) over your family’s hearts. Los Angeles, I am sorry I am not there with you today to cry together.” (Parenthesis added)

In another tweet, Puig described his own unique tribute. In the midst of spelling mistakes, the love is obvious.

“Having Vin comes up to me like I was specials to hims made me feel like his son. Since he went to heaven I write his name before each at bats and I know he is the reason I get a home run everyday since he pass. I wants the baseball to reach him.”

From Kindness to Gratitude

Scully’s affection for Puig reflected the broadcaster’s “unselfishness in a business that wreaks of ego and privilege,” wrote Sports Illustrated’s Tom Verducci. So did a sense of gratitude Scully displayed after his final broadcast from Dodger Stadium in 2016.

“Believe me, I’ve needed you far more than you needed me,” Scully told the crowd after the final out. “You have kept me young at heart. You’re the wind beneath the team’s wings and you’re the team beneath my wings.”

In front of Scully’s broadcast perch was a large white banner with this message: “I’ll miss you! Vin.”

Scully made his comments after that game turned into a lovefest. Fans spontaneously chanted “Vin, Vin” during a pitching change and after singing “Take Me Out to the Ball Game” to his recorded rendition during the seventh-inning stretch. The first eight Dodgers to come to bat tipped their batting helmets in Scully’s direction before stepping to the plate.

Scully’s sense of gratitude extends beyond his fans to his Creator.

“God has been incredibly kind to allow me to be in the position to watch and to broadcast all these somewhat monumental events,” Scully said. “I’m really filled with thanksgiving and the fact that I’ve been given such a chance to view. But none of those are my achievements; I just happened to be there.”

“I know some people won’t understand it, but I think it has been God’s generosity to put me in these places and let me enjoy it.”

One week after his final home game, Scully delivered a benediction as part of his last signoff following the regular-season finale in San Francisco. His words, spoken wholeheartedly and without bitterness, demonstrate how Scully’s faith defined him more than his career:

“May God give you, for every storm, a rainbow; for every tear, a smile; for every care, a promise; and a blessing in each trial. For every problem life seems, a faithful friend to share; for every sigh, a sweet song, and an answer for each prayer.”

A charmed life? No. An abundant life? Most definitely.

Joseph D’Hippolito has written commentaries for such outlets as the Jerusalem Post, The Federalist, Human Events, American Thinker and Front Page Magazine. He works as a free-lance writer.