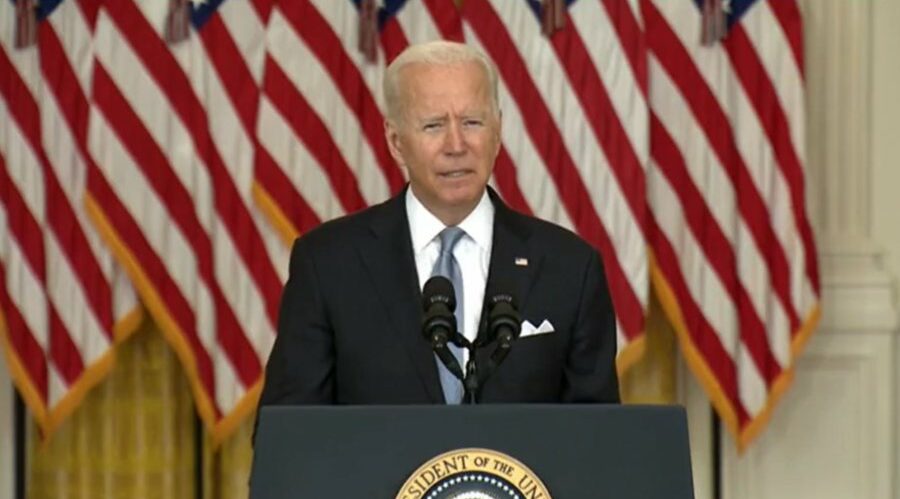 When your logic is weak, get mad. Get defiant. We saw that from President Biden in his “Extraordinary Success” speech on Tuesday.

But President Biden’s defiance didn’t turn his false claims into truths. Tragically, for the United States, our allies, and the innocents Biden left behind in Afghanistan, the speech proved that the only war the President is willing to fight is a war on reality. Instead of admitting the obvious — that the withdrawal was botched in several ways either by him, his military brass, or both — the President tried to create his own rosy reality by characterizing the last month as an “extraordinary success.”

Surrender is Always an “Extraordinary Success”

Yes, surrender is always an “extraordinary success,” especially when you surrender so well that you leave hundreds of Americans and thousands of Afghan allies as hostages of a brutal group of seventh century terrorists who engage in rape, slavery, forced marriages, and all forms of torture and murder. Many of those innocent Americans and allies couldn’t get through to the President’s extraordinary surrender because he allowed that same group of terrorists to be the “security” guards through which those innocents had to pass, not to mention the suicide bomber that murdered 13 Americans and at least 170 Afghans (the death toll keeps rising).

The reality is this: the entire mission was an “extraordinary success,” Mr. President — for the Taliban.

The President could have brought in more troops to provide security during the evacuation, but he apparently thought dates were more important than lives. Yet Biden had already broken the agreed-upon date of a May 1 withdrawal — just like he broke every other Trump agreement or policy he didn’t like — so why not stay until the innocents have been safely removed? In fact, the President promised just that two weeks ago. But he then broke that promise thereby leaving those innocents to be hunted, tortured, and murdered, a process made easier by a list of names Biden himself admitted may have been naively given to the Taliban. Essentially a “kill list.”

There is nothing more egregious and unforgivable to most Americans than Biden’s choice to leave Americans and our allies behind. We might respectfully disagree about the merits of staying or getting out of Afghanistan (personally I think Afghanistan should have remained a kind of Middle East South Korea, but that’s a topic for another column). However, we should never disagree about leaving innocents behind, especially when we had the ability right then and there to get them out.

Thanks to President Biden, the military adage “no man left behind” no longer applies. Thousands were left behind. And don’t forget the billions of dollars in weapons the President and his brass left behind too, some of which are probably being used right now on Americans and the Afghan innocents they abandoned.

The Rights of Women and Girls

More evidence of President Biden’s war on reality is found in this line in the President’s speech: “We’ll continue to speak out for the basic rights of Afghan people, especially women and girls.”

Well, that line has to be such a huge relief to all those women and girls the President left over there. We all know that these terrorists will tremble in fear and immediately abandon their 1400-year-old barbaric practices as soon as Joe Biden hashtags them with a strongly worded tweet or UN resolution!

That’s especially true since the President just removed all military leverage and demonstrated that he was afraid of what the Taliban might do if he had extended the evacuation operation to get our innocent people out. Those innocent women and girls left behind must be glued to Twitter just waiting for the salvation the President will deliver them when he words his tweet just right. (Why didn’t President Bush think of this strategy 20 years ago?)

I wish I could say that this war on reality only applies to the last month in Afghanistan, but I’m afraid it infects this entire administration. Just look at my own service, the U.S. Navy. When I was in the Navy under Presidents Reagan and Bush (1), our mission facing the Soviet threat was to keep the sea lanes open and to project force ashore when necessary. Navy Secretary James Webb (a decorated Vietnam hero who later became a Democrat Senator from Virginia) was such a proponent of a strong 600 ship Navy, he resigned in protest when budget cuts prevented him from getting to that goal.

What are the Navy’s priorities today? President Biden’s Secretary of the Navy, Carlos Del Toro, in his first message to the fleet this past April said that he and Secretary of Defense Austin, “view our most pressing challenges as the four Cs — China, Culture, Climate, and COVID.” Yes, we understand China, but Culture, Climate and COVID? Seriously? Nothing about terrorism? Or projecting force ashore? Or keeping the sea lanes open? Or is it just that Secretary Del Toro couldn’t figure how to alliterate those priorities into his memo?

With unserious leadership like this — people who are living in their own woke world where it’s a military priority to somehow fight climate change, and where words and pronouns are substitutes for the action necessary to save our citizens — is it any wonder that President Biden, Secretary Austin, and their military brass not only botched a surrender, but won’t admit to one mistake while thousands of innocents they left behind await torture or worse?

Do you think Joe Biden or any on his team would consider it an “extraordinary success” if they or their families were among the innocents left behind? Would they be continuing their war on reality?

The reality is this: the entire mission was an “extraordinary success,” Mr. President — for the Taliban. And you are most responsible for it.

Dr. Frank Turek is the president of CrossExamined.org and is the coauthor of I Don’t Have Enough Faith to be an Atheist and the author of Stealing From God: Why Atheists Need God to Make Their Case. On Twitter at @DrFrankTurek.