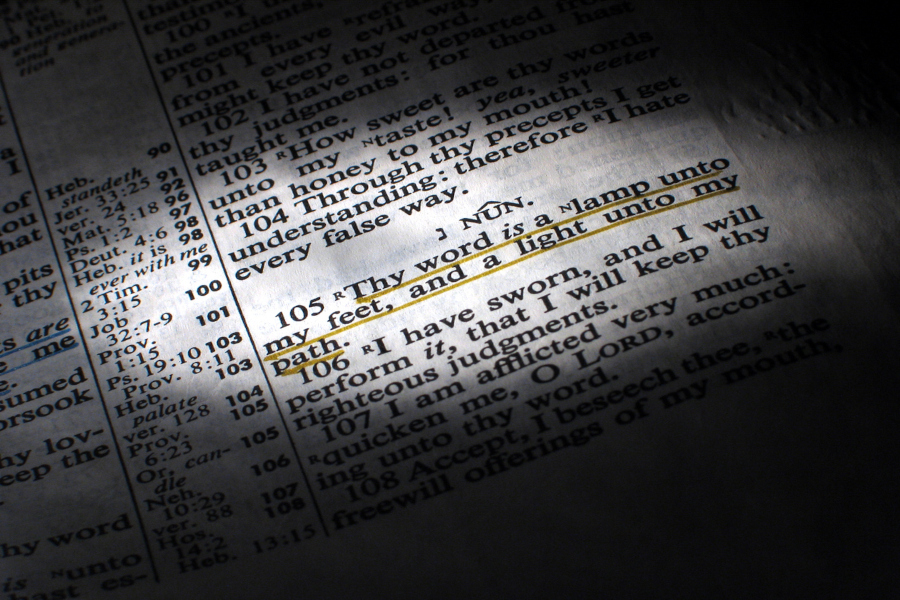 Psalm 119 is by far the longest chapter in the Bible, and lately it’s been a mystery to me. A full 176 verses long, the whole psalm is focused on one unvarying topic. If you’re not careful you might almost call it monotonous. So I used to see it as a stumbling block in my devotional cycle. For many years it’s been my habit to read a Psalm a day, but when I’d get to Psalm 119 I’d grit my teeth and force my way through; either that or else break it up over several days. I realize now how weird that is for someone who loves to read, but it also makes a twisted sort of sense when your twisted goal is to check it off a list and move on.

Lately, though, I’ve come to appreciate it more for what it is, and what it is, in part, is a mystery.

It’s an acrostic psalm. It has 22 stanzas, one for each letter in the Hebrew alphabet. Each stanza has eight verses, and each verse in a stanza starts with the same Hebrew letter. It would be like a poem written so that the first eight couplets started with the letter A, the second started with B, and so on. All but five verses say something about the law of God, using different synonyms for it such as word, decrees, testimonies, and so on.

Those are the mechanics of the psalm, but there’s nothing mechanical about it. It’s a long, shouting, glorious, continuously effusive love song to God for His Word. Hear a sample of it from just one stanza:

Open my eyes, that I may see
Wondrous things from Your law….
My soul breaks with longing
For your judgments at all times. …
Princes also sit and speak against me,
But Your servant meditates on Your statutes.
Your testimonies are my delight
And my counselors
(Verses 18, 20, 23-24, NKJV)

Imagine what it took, to craft this psalm, one acrostic verse upon another. It was no slapdash effort, you can be sure of that. It was a work of art, a poem whose very form and structure demonstrate the same love for God’s word the psalmist wrote into in each verse taken individually. (As a side note, if you’ve ever wondered if the Bible says anything about the value of art and craftsmanship, here’s a great example in action.)

We Have So Much More Than He Did…

So here is the mystery: How did he come to love the word of God so? Mysteries are good, by the way, and not just in books or TV shows. My best Bible study has always followed on questions like, “Well, that’s surprising… How can that be?” Mystery is often the gateway to discovery.

I know something of what it means to love God’s word, but then, we have so much more of it to love now. We have the New Testament, with its absolutely glorious picture of Jesus Christ. Even the Old Testament shines clearer in light of who He is and what He came to do.

God’s Holy Spirit comes to live in believers now, too, fulfilling Jesus’ promise after His resurrection. I’ll never forget the change when I first began following Christ. I’d read the Bible before, and found it moderately interesting. After I invited Christ into my life, the Scriptures seemed to turn electric for me. Honestly, it was stunning. I never expected them to come so alive; but this was the Holy Spirit’s work in me.

… So How Did He Come to Love God’s Word So Much?

We don’t know who wrote this psalm, but whoever it was, he had none of that New Testament advantage. It could be that he had nothing more than the Torah, the books we know as Genesis, Exodus, Leviticus, Numbers, and Deuteronomy. It’s got some great stories in it, stories that would have been so much closer to home to the psalmist than they are to us today.

I could see him getting excited over that. But Leviticus? Forgive me for saying this, but a whole lot of Christians today would call that the driest book they’ve ever read. (Notice how I finessed that sentence to avoid admitting it was true of me, too?) There’s a lot of the same in Exodus, Numbers, and Deuteronomy, too.

This psalmist didn’t see it that way, though. And to me that’s surprising. How can that be?

Just last week I came to Psalm 119 again in my devotional reading, though, and this time I read it with that mystery in mind. I dug in it for clues, and I found some. Throughout the psalm we see the writer exalting God’s word as a source of of wisdom, of understanding, of a cleansed way, of revived life, of confidence in knowing what is true. Long lists of laws may not seem so exhilarating, but blessings like that sure can be!

Whatever It Was for Him, His Words Still Speak for Us

And I realized I’d been making an unfair comparison. I may compare the Torah to the New Testament and find parts of it dry. This psalmist might well have compared it instead to the myths of the surrounding nations. The Torah is utterly unique among ancient writings, and not only because it rejects idol worship, sexual cult religious acts, and child sacrifice.

So I think he recognized the word of God for the anchor of truth that it is. It was also his gateway to knowing God had graciously, lovingly, guided his own people through slavery into the land of promise. And it showed him the difference righteousness makes in the life of an individual and a nation.

I still can’t say I totally get it. I can’t imagine getting inside the head of an Israelite living maybe 3,000 years ago. So there’s still some mystery to me there, but it’s a good one, in fact, better than I’ve told you so far. This time, you see, I wasn’t reading it just to check it off a list. I was reading it for what it was: a love song to God in gratitude for His word.

And even though I couldn’t read it in the psalmist’s original frame of mind, I could still read it in my own. Those first electric days of reading Scripture as a young believer haven’t really ended, and I really don’t know how to speak how my grateful I am to God for His word. I may be a writer, but I’m no poet; I don’t have what it takes for that. I’m glad someone did. He wrote Psalm 119 such a long time ago, but it spoke his heart then, and it still speaks for believers today.

Tom Gilson (@TomGilsonAuthor) is a senior editor with The Stream and the author or editor of six books, including one that’s full of surprises and mysteries uncovered in the life of Jesus: Too Good To Be False: How Jesus’ Incomparable Character Reveals His Reality.

Is the Bible Still Relevant Today?