The Most Reluctant Convert: The Untold Story of C. S. Lewis Now Available On Demand, DVD and Streaming Platforms 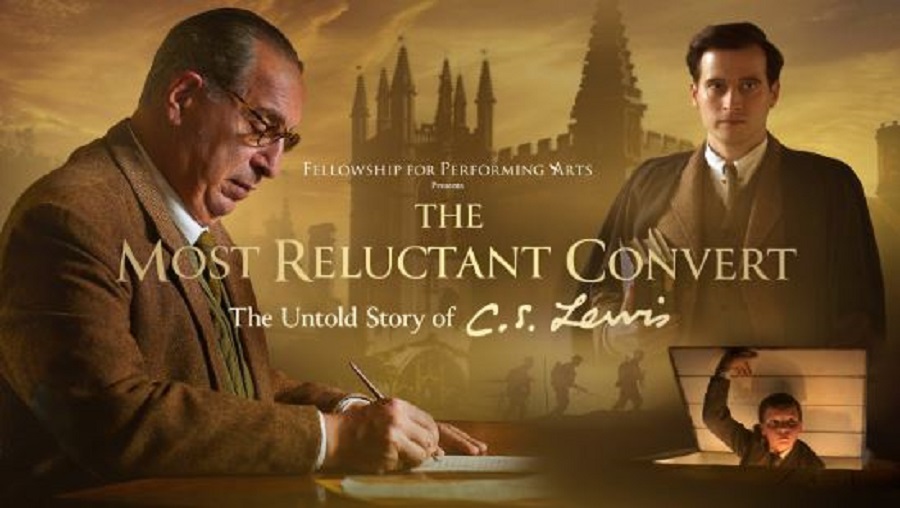 Award-winning actor and playwright Max McLean co-wrote and adapted one of his plays, “The Most Reluctant Convert,” into a feature-length film that was released last November as a one-night only event. Because of demand, The Most Reluctant Convert: The Untold Story of C. S. Lewis, stayed in theaters a month and brought in over $3 million in ticket sales. Now the film is available On Demand, DVD and streaming platforms, including Apple TV, YouTube and Amazon Prime Video.

McLean plays the role of an older C. S. Lewis who follows a young C. S. Lewis on his faith journey, looking back on his life and explaining his move from dyed-in-the-wool atheist to firm Christian apologist.

McLean’s roles in earlier plays, such as his adaptation of The Screwtape Letters and The Great Divorce, prepared him for his work on The Most Reluctant Convert, both as a play and as a film. McLean explained in an interview with The Stream:

What was interesting about Screwtape and Great Divorce is that both these fantasy novels reflected an aspect of Lewis’ conversion experience and his resistance to Christianity. In the Screwtape Letters, he was dealing with how temptation kept him away from the Lord. And in The Great Divorce, it’s actually a little bit more provocative how he resisted the promptings of the Holy Spirit. In many ways they’re two sides of the same coin. So, he had a real sense of the conflict involved in his conversion. So, it made me turn to his autobiography, Surprised by Joy. And that became the stage play, which really took on his conversion head on.

The Message is Still Relevant

Although C. S. Lewis’s books published many years ago, the message is still relevant. “He read everything from the Greeks to the Moderns. He had a steel trap mind that could remember everything he read and he could translate it into magnificent prose and speech. And he did it all under the headship of Jesus Christ. And that’s amazing. He was truly one of the great writers … in history.”

McLean believes that audiences will get a real understanding of the significance of Christ as they watch the film. Lewis experienced the problem of pain and evil and suffering. Audiences will experience it too. “We have to come to terms with the reality of our pain. And if that’s so, that which overcomes pain is even more real than pain itself. And that’s really the essence of Christianity.”

‘You Have to Dig Super Deep’

McLean had to “dig deep” to get to the core of who Lewis was in order to play the part. “Well, when you’re dealing in theater and you’re adapting something from the page to the stage, you really have to go underneath it. You … have to dig super deep. And what I discovered is you never get to the bottom of Lewis. There’s always another layer. And that really made me respect him so much more.”

McLean has another Lewis project in the works, a play that will be on tour in the fall. It will show how Lewis became the most influential Christian of the 20th Century and how he was such an effective evangelist, said McLean. “I mean, I think these are things that, really, people want to know.”

For more information, or to watch the film, go to CSLewismovie.com.