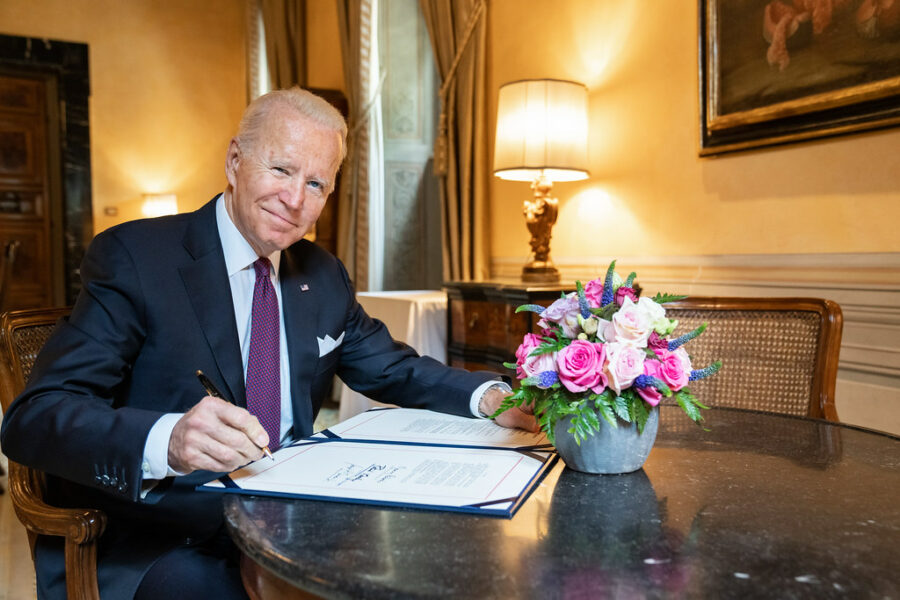 Given the date, today’s “joe” starts with Joe.

William Henry Harrison caught pneumonia at his Inauguration and died a month later. And even he had a better first year to his presidency than Joe Biden.

A year ago today, Biden stood at the U.S. Capitol and vowed he’d bring unity and normalcy back to the White House and the Nation. Instead, all we’ve gotten is chaos and Biden pushing retribution against Trump voters the way Mike Lindell pushes pillows.

As Sen. John Kennedy said Tuesday, “If aliens landed tomorrow and said ‘take me to your leader,’ it would be embarrassing.”

Biden’s approval ratings are just above dysentery’s. His disapproval amongst Democrats and Independents is rising faster than inflation. 37% of voters grade him an F, according to Politico, with another 12% grading him a D. (An “Absent” grade wasn’t an option.)

Only 19% give him an A. These are like those folks at the track who put their money on a broken down horse that in its entire career had never placed, and is currently wheezing and gasping 50 lengths behind the field, and they’re still shouting, “Go, Joe, Go! You’ve got this!”

Worse than the poll numbers, which may well rise, is the very real sense he’s already done. He’s over. America has checked out on him. Even CNN has been handicapping potential horses in the 2024 race.

Yes, his poll numbers may rise. But not — as it was with Bill Clinton after his rough start — in the sense of, “He’s getting better.” But in the sense of, “You were awful. We broke up. But there’s no point in harping on how awful you were. I’m so over you I can be magnanimous.”

Joe Biden gave his second formal press conference yesterday. The Stream will have more comprehensive coverage. But let’s see if I can give a quick summary:

“I’ve done a fabulous job! In fact, I’ve outperformed! The shelves are stocked, America’s more unified, and anything that’s gone wrong is the Republicans’ fault. Or that guy whose name I dare not say. American elections will be illegitimate if my voting rights legislation isn’t passed, and yeah, you’re still a racist and will be known throughout history as a racist if you vote against me, BUT HOW DARE YOU SAY I AM CALLING ANYBODY RACIST! And by the way, I’m okay with Russia invading Ukraine as long as it’s a minor incursion.”

Asked Biden, “What are Republicans for? What are they for? Name me one thing they’re for.” After listening to him ramble, mumble, jumble, explode and do the creepy whisper thing I can name one thing they should be for: “The 25th Amendment.”

Why Play Hide and Seek? Biden’s Dozens of Trips to Delaware

Joe Biden has made 31 trips home to Delaware during his year in office. By one count, a full quarter of his presidency has been spent in his home state.

This week, Jen Psaki was asked if the White House would finally release the visitor logs from his Delaware home. After all, if he’s spending 25% of his time “working” from Delaware, the American people have a right to know who he’s meeting with, just as the White House visitor logs are public record.

I mean, for example, shouldn’t we know if any of the people who spent $500,000 on a Hunter Biden painting paid Joe a visit? Shouldn’t we be aware if any, oh, Chinese business partners of Biden Inc. came by? You know they’re not there to roast s’mores on Rehoboth Beach. (Well, not primarily.)

However, Psaki refused. Again. No transparency for you, peasant. She also deployed a common Biden trick. When in trouble, roll out Biden’s late son Beau and late wife. Psaki said Biden makes so many trips to Delaware “because it’s his home. It’s also where his son and his former wife are buried.” (And many of his voters, we might add.)

Last summer, Biden told CNN it is “very hard” for him to “get comfortable” at the White House. As a taxpayer, I’m uncomfortable paying for his weekend getaways and not having any idea who he’s meeting with on company time. By the way, how much is it costing taxpayers not only to fly him up there on that huge carbon-footprint of a jet, but also to house all the staffers and agents who must travel with him?

Boy was the media going bonkers for this one. NPR’s Nina Totenberg reported that Justice Sonia Sotomayor is refusing to work in-person because Justice Neil Gorsuch refused to wear a mask, even after being asked by Chief Justice John Roberts. Although both are vaxxed to the max, “according to court sources, Sotomayor did not feel safe in close proximity to people who were unmasked.”

Thus, according to the media, Gorsuch was deliberately putting Sotomayor’s life in jeopardy.

One problem: On Wednesday, the two Justices put out a rare public statement vehemently denying the NPR report.

“Reporting that Justice Sotomayor asked Justice Gorsuch to wear a mask surprised us. It is false. While we may sometimes disagree about the law, we are warm colleagues and friends.”

Chief Justice John Roberts also released a statement: “I did not request Justice Gorsuch or any other Justice to wear a mask on the bench.”

Sense Creeping Back In? British Prime Minister Boris Johnson Announces an End to All Mask Mandates and COVID-Related Restrictions

This is great news. The bad news? Without the masks, we get to see the Brits’ dentally-challenged smiles.

Starbucks is Dumping Its Vax Mandate

Starbucks has dumped its vax mandate on U.S. employees. The coffee chain imposed its mandate earlier this month. Starbucks claims its decision to reverse course came after the Supreme Court struck down Biden’s OHSA vax mandate. Couldn’t they just say it was a “Grande” mistake? How hard is that?!?!?!?! Sorry for “Venti-ing.”

The second in our EXCLUSIVE series of excerpts from fired First Dog Major’s tell-all Major Disaster: My Year in the Biden White House. Today: “Former First Dog Exposes the Masters Who Control Joe Biden … and the Source of Mr. Joe’s Rage.”