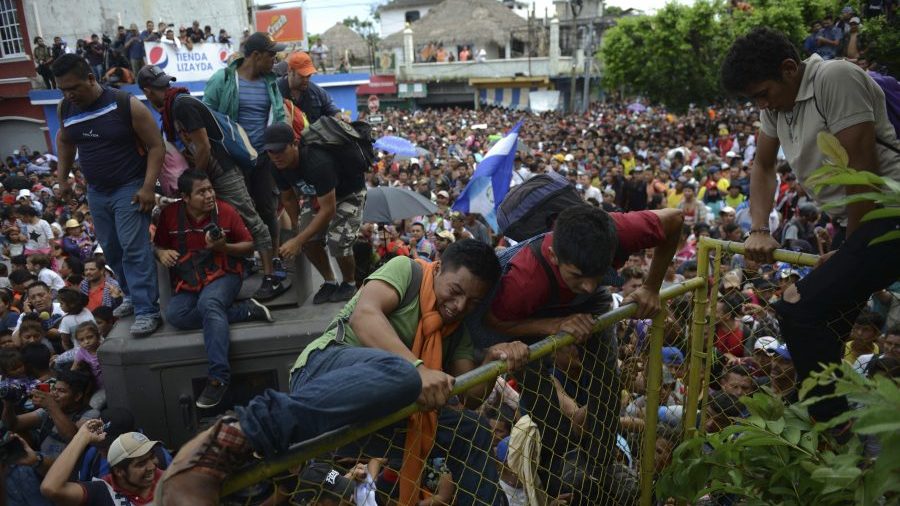 How many immigrants from the Conquistador Caravan marching north through Mexico should the United States accept?

Zero. Not a single one. We shouldn’t have to spend tens of thousands of dollars per migrant that could go to veteran’s hospitals fighting motions from Soros-funded lawyers to prove the obvious in court.

Not one of these people is a refugee. Not one.

Not one of these people is a refugee. Not one.

The March of the Conquistadors

Here’s an easy way to identify people being persecuted by a government: They don’t march out of the country in the full light of day, in organized caravans, unmolested by authorities, waving that country’s flag. That’s what soldiers do. And colonists. They’re proud as heck of the nations they’re leaving behind. They just want more land, or wealth, so they’re going out to take it. To rip it away from the natives, if they’re weak or foolish enough to let them.

Some stories of the Spanish conquest of Mexico assert that Moctezuma, the Aztec king, believed that Cortes was in fact a redemptive figure, the friendly god Quetzalcoatl, coming back to save his people. It didn’t take long for Moctezuma to bitterly regret that superstition, as Spaniards took over his country and plundered the place.

Those Poor People Are Your Ticket to Joining the Elite

Likewise, America’s elites believe that limitless numbers of migrants add up to a kind of “Hive-Christ.” By blowing open our borders and letting anyone who shows up sign up for welfare, then organize to outvote the natives, we can purge ourselves of the sins of all our forefathers. Those wicked Indian-killers and slave owners whose guilt we can agonize about and atone for, even as we shrug at a million abortions per year in our own time and under our own control. We could stop them. We don’t want to. So let’s talk instead about how wicked our ancestors were! At least we’re not slaughtering buffalo. …

And then we can feel good about ourselves, for a brief, shining moment. Since we don’t believe in God, or care about the future, happy moments are all that matters. And saying “I stand with immigrants!” makes us feel good.

When they watch a crowd of foreigners marching into the country, they don’t see a threat. Instead, they can already smell the food from new ethnic restaurants, and hear the quaint foreign accents of affordable nannies and housemaids. “You want me to do the bathrooms, Señora?”

In fact, it makes us feel better than our lower-income neighbors. Indeed, this sentiment places us among the very best sort of people. The cosmopolitan habitués of TED Talks, the Oscars, and Davos. The patriotic citizens of International Business Class. You don’t find those people waving flags or singing anthems, do you? They welcome “diversity,” in every form. When they watch a crowd of foreigners marching into the country, they don’t see a threat. Instead, they can already smell the food from new ethnic restaurants, and hear the quaint foreign accents of affordable nannies and housemaids. “You want me to do the bathrooms, Señora?”

The Hive-Christ Instead of the Real One

The “Hive-Christ” appeals even more to nuns who have lost their faith, or priests who have found a boyfriend. They can banish the genuine Jesus, Who created them and judges them. Whose piercing eyes bore into them from all those awful, old-fashioned icons. Paper those over, tear them down or hide them. If they fill up the sanctuary of a cathedral you control? Spend millions ripping them out.

Replace them with cheerful posters of friendly, grateful people, building the socialist Future. Replace the old doctrines and dogmas that press so hard on the abscess of guilt within your soul with … what? With fragments of quasi-Christian sentiments, glued together like a second-grader’s mosaic with warm, sticky emotions. Instead of childlike innocence, embrace a childish logic:

And nothing else. Make a poor child smile, whatever that takes, and your slate is clean. You’ve redeemed yourself, on your very own power. These poor folks you’re “welcoming” in to be funded by other’s taxes … they’re not moral agents, fallen and shaky like decadent North Americans. They’re little Jesuses, perfect and pure, who have climbed down from the cross as you urged them to. And now they are marching! You can march behind them, to tear down Caesar’s palace. Or better yet, to claim it.

Along the way to the final consummation of the triumph of the People, they can fill up your churches, briefly. If you’re an American bishop who has lost 40 percent of the faithful, the new People can replace them. Should your withered flock fail to fund your bloated budgets and palaces, the People will make that up via $500 million in federal government contracts. If you’re a politician whose clunky, big-government laws have impoverished and alienated poor Americans for decades, fear not! A new People is here to replace them. Fresh cannon fodder for No Man’s Land in Baltimore and Chicago.

The Hive-Christ will redeem you.

It will redeem and replace us all.